On Finding Noses and Growing Older

Ben and I recently spent a day floating the river in hopes of finding a snout or two looking skyward. We weren't disappointed, but we were a little rusty. Of a half dozen opportunities, we converted on two. Such is fishing, and as you almost certainly know - the fish we miss are the ones that keep us coming back.

The two fish we brought to hand were not, however, the most notable part of the trip. Somewhere along those first few river miles, in between the boat launch and the first trout willing to take a swipe at my hendrickson, I had a thought - not a wholly unusual experience in and of itself, but strange given its context. 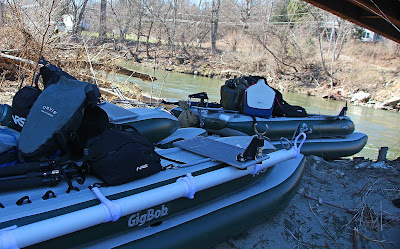 I wanted to hook a trout. I wanted the thrill of out-sized noses, tight to the bank or in a foamy seam, to materialize from the ether and swallow our poorly tied bugs. I wanted long casts and tight lines. I wanted some affirmation that after a combined four decades of near continual practice, Ben and I were competent bug chuckers, able to get the job done.

With as much in mind, we loaded the cars with one cooler, two boats, four oars, five rods, twelve beers, somewhere in the vicinity of 1500 flies (we fished five or six all day), and at least 6000 calories worth of roast beef and egg salad sandwiches. We actually took the time to wash thermal underwear and patch our leaking waders. We drove one hour to the take-out and another 15 minutes to the launch. We left business unattended and cashed in collateral with our wives. All that, and somewhere after we launched but before that first fish, I was struck by the notion that it wasn't the fish we were really after. 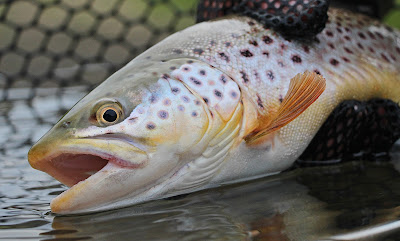 I remember once attending a lecture and slide show - on nymphing techniques, I think - given by Joe Humphreys. I was eager to hear what so talented and recognized an angler might have to say, but truth be told, so many years have passed between then and now that I remember nothing the noted bug chucker had to say about fishing a nymph. There is, however, one nugget that for whatever reason left an indelible impression. Humphreys implored his audience to "look up." 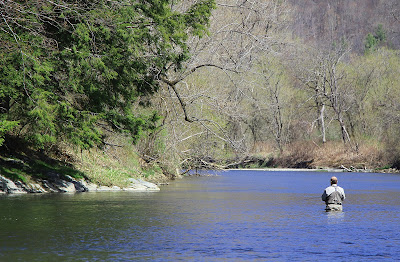 At the time, I either had no idea what Humphreys was talking about or I dismissed it as so much romantic nonsense, but nearly twenty years after the fact I am struck by his words. "Look up," he said. Look away from the water, and look to the trees. Look to the sky, to the birds, to the sunset or the sunrise. Look to the world around you, all those things that have become cliche in the sport's literature, and above all else - look to your friends and fishing partners. Take it in. Take it all in.

We were floating a beautiful piece of water on a genuinely beautiful spring day. If only for a moment, we were free of the stress and worry life often heaps on us in abundance. We were concerned, or rather unconcerned, with something that in the grand scheme is nothing but a trifle: finding a rising trout and coaxing it into taking one of our flies.

I don't know why, maybe it's a consequence of having caught my share of fish or the result of growing older and realizing I've more years behind me than are likely ahead, but somewhere after the boat launch and well before I hooked that first trout, I looked up from the water and realized my being there was enough. Sharing a river with my friend was enough. Sharing hope was enough. 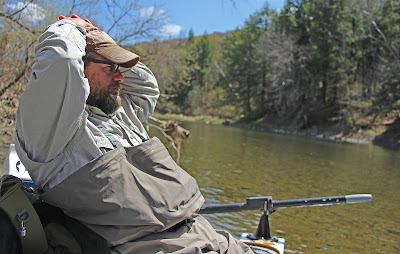 I can absolutely relate to the last paragraph. Although, I probably did not nearly spend as much time on the water as you did, I enjoy literally every time I get a chance to stand on the river. Fish are a nice bonus but just being there, watching and listening to water and wildlife is my highlight of the week.