What follows is the text of an email I received from friend and well known realistic tyer Bob Mead. He and David Martin, also a tyer of realistic flies, are starting a new auction site that may be of interest to the few folks who read my blog. Check it out and give 'em a shot.

David Martin and I are starting our own auction site for both buyers and sellers.

We decided that for $0.50 the seller can list any item at any price. This insertion fee includes the listing, up to 4 pictures, and a view counter. If you go to the site and make like you are listing an item the prices for additional auction helpers such as Bold print, Highlite, and featured item, all very low, will come up.

There will be NO final price percentage fee. David is trying to use the BANNER to let people know that there is no final price fee as he can't just go in on the fee schedule and put it there, he can only change charges and fees prices. It's just the way the program was written by the guy who created it. We'll figure it out. We were originally going to charge a constant 2 percent final price fee and give everyone a 20 dollar credit toward that final fee, but the guy who created the auction site would have to rewrite the program. He liked the idea and sometime in the future may incorporate it.

So basically, a seller can list any item for 50 cents and have no further charge for selling it. No charge for Buy it Now either. Google won't pick it up for a week or two. We have many venues to promote it plus all our personal collectors of our flies and other FF goodies, plus lure collectors have already been notified. This is going to be interesting. I'll be listing stuff myself.

I hope you will give us a try. Please register.

You can sell and buy. To sell, we have paypal to register accounts, so we can get our tiny fees, plus we will take m.o.'s from sellers so they can open an account if they don't use paypal.. We want to stay away from CC's although individual sellers can select any type of payment from buyers they want and are not limited to one type of payment. After that you must have sent in a m.o. $25 or more, or used your paypal to place a working balance in order to sell. You don't need a balance to buy.

Payment is between you and the seller who will list the type of payments he/she will accept.

Take Care and Thanks,

A little history lesson courtesy of my student loan company, the G.I. Bill, and the first five or six entries to come up on a Google search (good thing I spent all that money) ...

In 280 B.C. and again in 279 (I refuse to use the politically correct "B.C.E.") King Pyrrhus of Epirus devastated his Roman opponents on the fields of Heraclea and Asculum respectively. Following the battle at Asculum the Greek historian Plutarch recorded Pyrhuss' reaction. The translation reads something like this, "One more such victory and I am lost."

Pyrhuss, it seems, sacrificed too many men to achieve a favorable end to the war. Although they were clearly defeated and suffered terrible losses, the Romans were better able to gather new recruits and resume the fight. Pyrrhus' own army was decimated, and he did not have the resources of his Roman counterparts. By winning the battles Pyrhuss lost the war. From this page of history we draw the term "Pyrrhic victory," which has come to suggest a victory that has been won at too dear a price.

The spring of this year witnessed the kind of fishing about which most of us dream. The hendricksons came in tremendous numbers, and it seemed as if every big fish in the river was regularly on the feed. Ben, Adam and I had more than just a few days when several twenty inch browns came to net. On one such day, Adam (the lucky SOB) took a twenty-four inch hen, and just a few moments later followed it up with a twenty-three inch kype-jawed male. Days like that are almost unheard of in this neck of the woods. Yes, the spring of 2009 was glorious.

Summer, by way of contrast, has been abysmal. Without consulting a local meteorologist, I would guess that since the end of June we've averaged two or three days of rain per week. The near continuous rainfall has had the effect of raising water levels in all the local ditches, and maintaining flows that just aren't conducive to fishing. Last year at this time I was averaging three or four days on the water per week (despite the triplets having just learned to walk). What am I averaging this year? Let's just say that I was never any good at fractions. It seems I spent all my mojo during the spring, and that I've nothing left with which to finish the season.

What then should a fisherman do who appears to have angered both the river and weather gods, and has virtually no hope of catching a fish? If you're reading this then you likely know the answer. When one is tormented by high water, horrible weather, and a gnawing desire to wet a line then one follows Pyrrhus' example and fishes regardless of normal considerations. That's what we did yesterday at any rate, and that's what we'll do tomorrow. Yesterday, we caught fish; a surprising number of fish. Tomorrow, who knows? Maybe we'll find just a drop or two more ju-ju, and continue to fight the good fight.
Posted by BKill at 5:59 PM 1 comment:

Would you believe Big Daddy forgot to pack his gear? Yup. I left it all sitting on the porch, and there it remained until I returned. I had a free pass from the boss, and had even looked into booking a guide on the rat's lake. I was actually a little disappointed. There's a certain novelty to fishing in the foreground of Cinderella's castle.

My wife says not to worry as I'll have a chance to fish the lake next year, when we take our next trip. 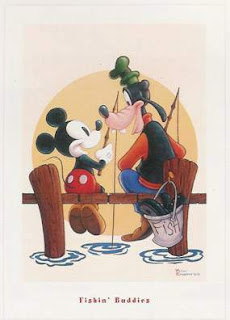 I'll be signing off for a week or so, as the triplets, the wife and I are making the drive to Florida. The kids are excited about the prospect of seeing Mickey's Castle. My wife is excited that the kids are excited, and I am dreading the whole ordeal.

Why? For starters it's freaking August. I weigh nearly three bills on a good day, and over three bills every other day. I'll be sweating more than a stray dog in a North Korean prison camp. Then there's the fact that my children are all of two and a half years old. Take a moment to consider all that implies. Two girls and one boy, each of whom has recently begun potty-training and taken a special interest in the others' genitalia, strapped in adjoining car seats for over twenty hours (one way). Sound like a good time? Johnny, you bet it does.

There had better be some willing bass in that freaking rat's lake.
Posted by BKill at 4:54 PM 1 comment: 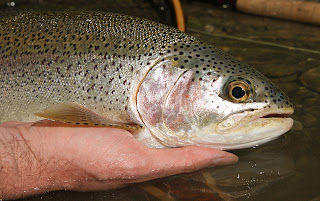 About two months ago I visited my doctor about some pain I'd been experiencing in my abdomen. After a short examination he declared that I had a hernia, and he scheduled an appointment for me to visit a surgeon. One week later I found myself in that surgeon's office explaining that I needed to postpone the operation until mid winter. Naturally, he recommended I have the procedure done immediately. "You'd be up and about in only a few days. Why wait so long?"

Clearly, he wasn't a flyfisherman. He knew nothing of the hendricksons that were, at the time, coming off the water in tremendous numbers. He knew nothing of the sulphurs, which would follow the hendricksons. He knew nothing of brown trout, rainbow trout, brookies, largemouth and smallmouth. He had never double hauled an entire fly line, or lusted after another bamboo rod. The point is that at the time, I had months left in an already far too short fishing season, and I wasn't going to miss even a single day. My wife thought my decision was foolish. Adam disagreed.

Adam is one of the most focused fishermen I know. Strike that. Adam is, without a doubt, the single most intense angler I know. He is keenly perceptive, and purely analytical. If the Battenkill were a place where no man had gone before (sadly ... it is not), Adam would be a Vulcan and his flyrod a tricorder (yes Virginia, I am a geek). The man doesn't just go fishing. He weighs all the variables: air temperature, water temperature, cubic feet of water per second, weather forecast, historical climatic trends, prevalent hatches, and moon phase (by this I mean the moons of Jupiter). He knows when fish are going to be active, and he makes sure to be on the water when they are.

Which brings us to May 31st, 1998. Adam thought it would be a perfect day to fish, and I suppose that when one looks at the variables he was absolutely right. The river was running at roughly 150 cfs, which is perfect for drifting a pair of nymphs. The fish had been active during the previous week, having the tail end of the hendrickson hatch to enjoy. A cold front was threatening, but had not yet moved into the area. If I hadn't been committed to a backyard barbeque with my fiance's family, I probably would have joined him. Everything was looking good.

Yep. Everything was wonderful until the tornado touched down. The worst damage was had by the city of Mechanicville, where 215 mph winds were recorded. Dozens of homes were destroyed, any number of injuries were reported, and five people lost their lives. The storm tracked for miles, slowly losing intensity. By the time it reached the river, homes and barns were spared, but trees along hundreds of yards of shoreline were either uprooted or snapped like so much kindling. Where was Adam through all of this?

Would you believe he fished through the storm? Think about that the next time you find yourself casting a four weight and cursing the wind.

Not too long ago, I was recounting these stories to a colleague. Her response?