Out There: Video Redux

In previous entries, I've discussed the inherent misery of winter fishing. Snow. Sleet.  There is ice on the water, and ice in your guides. The air is cold enough to freeze beer; even the pines seem to shiver in the wind. This is especially true if you're fishing "out there," in the snow belt, just a few short miles from Lake Ontario.  As a knuckle-headed, February flyflinger, one's only real consolation when knee deep in New York's Salmon River is that the fish are cold too. I imagine they must be so cold - in fact - that they're precisely one step removed from the box of fish sticks you fed the kids at lunch.


Regardless, intrepid bugchuckers will gird up their loins and make the two, four or six hour drive to the river, all in the hopes of hooking - maybe even catching - a mirror bright steelhead.


If the cold isn't hint enough that you're fishing during a northeast winter, then the trees decked out for Christmas should give you a clue. 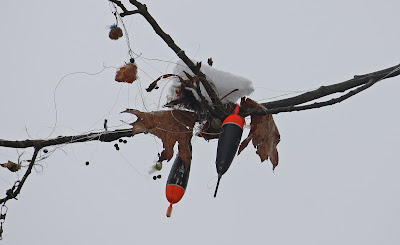 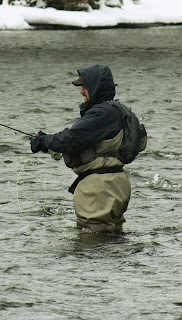 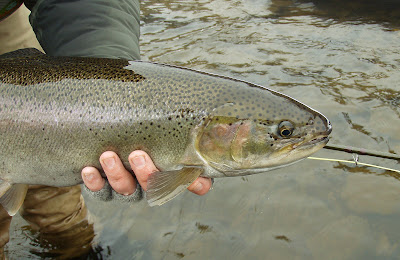 Until now, my ugly mug has never appeared on this blog. I guess I'm not one for hero shots. I suppose my inaugural photo has me looking a little like an overstuffed Bilbo Baggins (the bravest little hobbit of them all). Of course, I'm over six feet tall, and weigh in just under three bills. 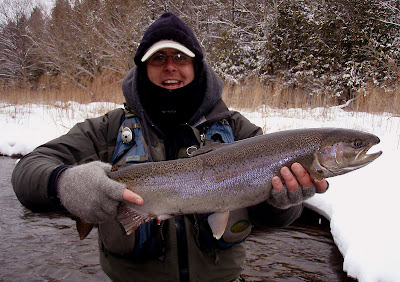 Apparently, Ben's father was once something of a flyfisherman. He traveled the western United States, wetting his line along the way (please ignore the obvious innuendo). He fished an old Garcia fiberglass rod, not unlike the one on which I learned to cast. Attached to that rod was the reel you see below. When Ben recently uncovered his father's aged tackle, both rod and reel had clearly seen better days. Ben has taken it upon himself to refinish his dad's gear, and present the finished assembly to his father once it has received a thorough going over. He's finished the reel, and I think the results are rather impressive.


The paint was chipped, cracked, and faded; corrosion covered the cast metal. 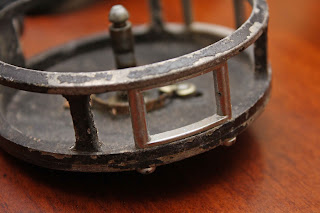 The spool was in similar shape. Note the broken handle. 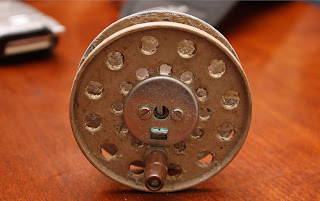 The spring wasn't much better. 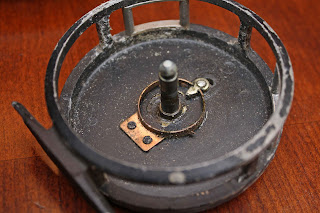 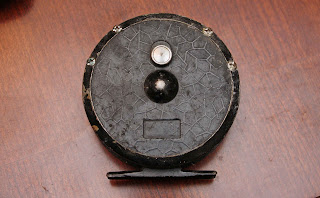 I won't pretend to fully understand the process by the which Ben was able to breath some life back into Pop's reel. I know that both a sand-blaster and bead-blaster were employed (I don't what a bead-blaster is either). I know he used a little epoxy to reshape the broken handle. I think everything came together nicely, and I suppose that if this were a high dollar Hardy Perfect from the 1920s - rather than an inexpensive 1960s Garcia - we would probably call the end-result a Spitfire finish.

Corrosion and all but a few flecks of paint are gone. 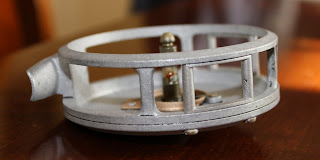 You would be hard pressed to tell the handle was cracked, and the spool appears new. 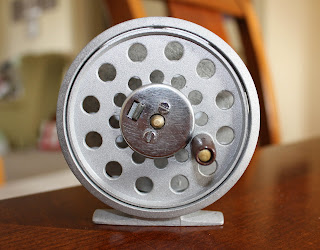 If Ben could work this kind of magic on turn-of-the century Hardys ... his business might take a new turn. 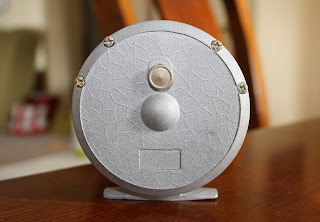 Portrait of the Artist as an Old Man

Elmer was my great-uncle. He lived in Shushan, New York, and his home stood on an eastern bank of the Battenkill. In the water that cut a swath through his backyard, I caught my first trout on a fly. Elmer was my great-aunt Aggie's second husband; her first drowned in the river as had her only son. It's a tragic story, and an indelible reminder of the lower river's deceptive power. I digress.

Out of the necessity born of poverty, Elmer was a fisherman. In fact, he was a superlative fisherman. No, he never wrote any magazine articles; I'm fairly certain he never read any either. Hunger, family and the vows of marriage were his only motivators. He didn't own a pair of waders; he kept only a single flybox in his wicker creel. Elmer fished a steel rod because Elmer had always fished a steel rod, and his silk fly line was wound onto an old nickel-silver baitcaster.

Elmer's nose looked to have been broken a dozen times; his hands showed the scars and calluses of a lifetime of manual labor. I imagine him as a prizefighter in boxing's heyday, but more likely he had been on the bad end of more than a few bar fights. Elmer would never have made the cover of Flyfisherman, although he may have appeared on a timeworn Field and Stream.

Elmer caught trout - bushels of trout - every season. I remember once marveling at the contents of his chest freezer. Hundreds of browns and a few dozen brookies, were lined up and packed like cord wood in the cavernous, frozen vacuum. If he and my aunt subsisted on fish, as I must assume they did, then they ate well and often. Elmer may have heard the arguments in favor of catch and release, but the freezer left little doubt that he dismissed those discussions as so much romantic drivel. When Elmer took a trophy fish - and he often did - that fish ended up on the dinner plate, not on the wall.

Elmer died years ago, and Aggie followed shortly thereafter. Their house - or what remained of it anyway - was sold to a gentleman angler from New York City, who thought it quaint to own a home on the Battenkill. I drive by occasionally, and when I do I invariably lament the loss of the place and the man. Elmer's home and Elmer's water occupy a sanctified place in my memory.

The world has changed, indeed.
Posted by BKill at 8:10 PM 1 comment: