Wow. I've never seen anything like this, and I don't know that I ever will again. God bless anyone in the path of the river. Irene was bad enough, but the flooding makes her seem just that much worse.

It happened just the other day. I stepped out the backdoor of my home, and discovered that the air was a little bit different than it had been the day prior. The blue of the morning sky was just that much deeper, and the breeze carried an indescribable yet wholly familiar scent. Unmistakable and most welcome. Summer made its turn toward autumn.

If spring is my favorite season of the year then the fall is a close second. I suppose I enjoy it for all the cliched reasons one might expect: the brilliant reds and yellows that drape the mountainsides, the crisp snap of an apple fresh picked from its tree, temperate air, cooler water, willing trout.

After making the drive to the river, I was pleased to discover that the water temperature had dropped precipitously from its mid August high. Following a summer spent chasing bass, carp, bluegill, bowfin and gar - and thoroughly enjoying every moment of the endeavor - I was finally able to return to trout. I suppose it must be true that absence makes the heart grow fonder. 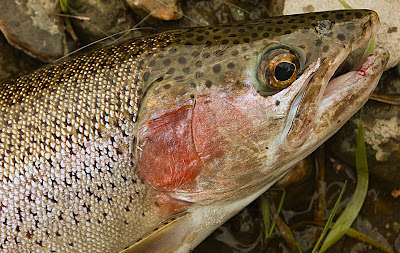 Soon enough, I'll be chasing lake run browns, salmon, and steelhead. Soon enough, 5X tippet and diminutive dry flies will give way to switch rods, sink tips and Intruders. Soon enough, I'll be wrapping myself in layers of Gortex and Techwick, and struggling to keep out the lake-effect chill. In the weeks between then and now, however, I'll have the river's trout.
Posted by BKill at 3:14 PM No comments:

A Politician Speaks of Whiskey

Only very rarely do I write of anything that is not related - however tenuously - to fly fishing. What follows is a bit of a stretch, but when I saw it posted on a military blog that I follow ... I just had to repost it here. I am not sure of its voracity (snopes.com has conflicting reports), but I am certain that a few of my readers will find it of worth.

Armon Sweat - or Noah Sweat depending on the account one reads - was a representative in the Mississippi House from Alcorn County, and what follows was his response when asked about his position on whiskey. Apparently, this diatribe is read on the House floor at the beginning of each legislative year.

Remember ... whether or not anyone ever spoke these words is really of little consequence. All that matters is the universality of the sentiment (substituting your own particular poison, of course).


"If you mean whiskey, the devil's brew, the poison scourge, the bloody monster that defiles innocence, dethrones reason, destroys the home, creates misery and poverty, yea, literally takes the bread from the mouths of little children; if you mean that evil drink that topples Christian men and women from the pinnacles of righteous and gracious living into the bottomless pit of degradation, shame, despair, helplessness, and hopelessness, then, my friend, I am opposed to it with every fiber of my being.


"But, if by whiskey you mean the oil of conversation, the philosophic wine, the elixir of life, the ale that is consumed when good fellows get together, that puts a song in their hearts and the warm glow of contentment in their eyes; if you mean Christmas cheer, the stimulating sip that puts a little spring in the step of an elderly gentleman on a frosty morning; if you mean that drink that enables man to magnify his joy, and to forget life's great tragedies and heartbreaks and sorrow; if you mean that drink the sale of which pours into our treasuries untold millions of dollars each year, that provides tender care for our little crippled children, our blind, our deaf, our dumb, our pitifully aged and infirm, to build highways, hospitals, and schools, then certainly I am for it." 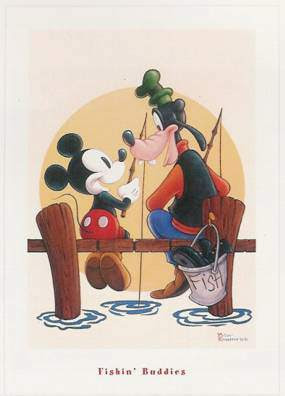 As of Friday I'll be signing off for ten days or so. The triplets, Mama, and I will be on our way to Disney World. We made this trip just a couple years ago; we're making it again because the wife says it's time. I can't say that I echo the sentiment; once is enough for me. I might find the Magic Kingdom a little more magical if it was home to a run of summer steelhead. 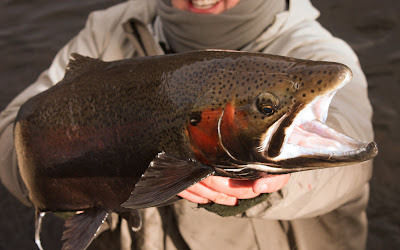 Naturally, my girls are thrilled to be visiting Cinderella's castle, my boy wants to ride a pirate ship and dig for buried treasure, and my wife is excited to see the kids so excited. While I'm glad that my family is so looking forward to the trip, and I'm sure that I'll have a good time, I still have to say that I wish we were going to Yellowstone. 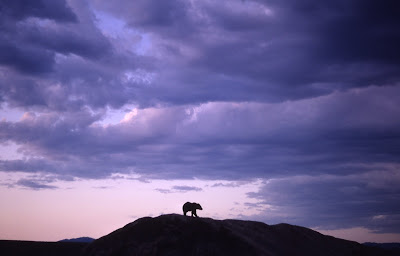 I wonder when the boss will say it's time for that trip to happen.

Here's to hoping I'm able to eke out one more trip to the river before I leave, and that there's some willing bass in that freaking rat's lake once we're there.
Posted by BKill at 12:55 PM 2 comments:

(Portions reprinted on The Rusty Spinner with permission of Michael Hayes, Editor of the Killingworth-Durham-Middlefield Patch)

Since last Friday, when news about Greg Myerson's apparent world-record striped bass started churning up the Internet, his cell phone and email in-box have been jammed with messages. His friends and people suddenly claiming to be his friends have been agog with talk of big money from endorsements. Nevertheless, Greg Myerson started Monday morning knee-deep in the cold, clear water of Munger Brook, calmly adjusting rocks on a small spillway he constructed next to his North Branford house.

"I'm going to wait and see what happens," he says about the possibility of benefits and fame derived from the 81.88-pound fish he caught Aug. 4 in Long Island Sound, just beyond Outer Southwest Reef off Westbrook.

His wait-and-see attitude is pure wisdom, because the fish must first be certified as a record by the International Game Fish Association (IGFA), which approves and keeps track of such things.
"Approval of a record is a rigorous process," says Jack Vitek, IGFA records coordinator.
Not only must appropriate documents be completed but the fishing line and leader used to catch the fish must be tested and the scale on which it was weighed certified. No action can be taken until at least 60 days from the catch day.

Scoffing at rumors that he would not submit his fish to the IGFA, Myerson, 43, points to his house and says, "I've got the IGFA papers in there."

With that, he tosses a handful of feed pellets into the brook, bringing the water to a boil of hungry trout, fish he has stocked there for fun. A few minutes later, shutting off his noisy cellphone, Myerson sits in an easy chair by a large window overlooking the brook.

"I can feed my trout out this window," he says.


The Catch That Changes Everything
The big -- he's 6-feet-4-inches and 275-pounds -- former linebacker at the University of Rhode Island seems almost unaware that, in the angling world, at least, he has become an instant celebrity. Obviously, however, Myerson is planning ahead.

"I want to start a company that sells online," he says. "It would market T-shirts, caps, fishing rods and maybe reels."

As for endorsements, Myerson adds, he is open to offers but not looking for them.

After news of the catch went out, Myerson says he was called with advice and congratulations by former record-holder Albert McReynolds, who boated a 78.8-pound bass off South Jersey in 1982. McReynolds, formerly of New Jersey and now retired in Florida, made a ton of money but also was targeted by cranks as a hoaxster.

Myerson has already been subjected to similar treatment. One well-known fishing writer wrote in his blog that the fish had been caught by an "Al Stromski" and when the name was corrected, noted that Myerson had suffered a panic attack after being badgered about the fish.

Some posts on the Internet suggest something is fishy about the catch besides the fish itself. The burly Harley-Davidson rider laughs it all off.


Fishing Since Childhood
Many anglers who know Myerson say he's paid his dues and deserves the record.

"Better he catches it than some guy who just happened to toss his line in the water," says a buddy.

During the season, Myerson virtually lives on the water, fishing night after night. Big fish are not a novelty to him. He routinely catches and releases stripers that would be another angler's fish of a lifetime. Myerson has been fishing for most of his life. He started at age 12, fly fishing on the Muddy River behind a friend's house in his native North Haven. About the same time, he caught his first striper when a family friend took him to the turbulent Race at the eastern end of Long Island Sound.

"From then on, I wanted to catch stripers, he says.

**** To read the remainder of this article and more about Myerson's amazing fish, please click here to go to NewLondonPatch ****
Posted by BKill at 10:09 AM No comments:

Saw this on Marc Aroner's blog. I had to post it here.


Bells Whiskey from Condor Cape on Vimeo.
Posted by BKill at 6:33 PM No comments:

You can do the sensible thing, and try for warm water fish ... bass, carp, bowfin, gar.

Or you can head to a tailwater that you've never before fished, park your buddy's drift boat immediately below the dam, marvel at the water temperature and fish marked on the Humminbird, and spend the afternoon drinking beer that is only slightly colder than the water.