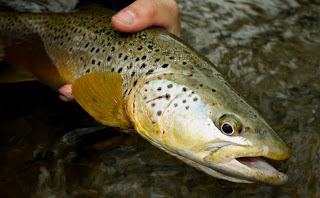 Below, you'll find a short selection of fly fishing anecdotes. Some are drawn from contemporary sources while others come from older references. Many will make you laugh, others are rather poignant. In their own fashion, each expresses a small part of fly fishing's allure and charm. 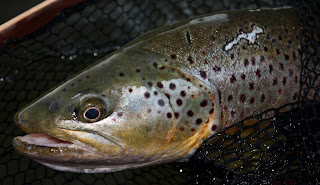 "Some act and talk as though casting were the entire art of Fly-fishing, and grade an angler solely by the distance he can cover with his flies. This is a great mistake and pernicious in it's influence. Casting is but a method of placing a fly before the trout without alarming it, and within its reach. It is merely placing food before a guest. The selection of such food as will suit, and so serving it as to please a fastidious and fickle taste, still remain indispensably necessary to induce its acceptance."

"Some fishermen think that any rod they buy and pay for should stand any form of abuse, and if it does not, the rod-maker is blamed and his work decried. The makers know this, and that their reputation for skilled and honest work is as sensitive as that of a woman. ......To such of my readers as wish to buy and do not care to make, I would say that the maker who has a reputation, will do his best to maintain it. If he once turned out good work, competition will force him to do so still. If he has the skill, you may be sure he will use it. No one knows better than he that one bad rod will do him more harm than a hundred first class in every respect will benefit him....."

"Unless one can enjoy himself fishing with the fly, even when his efforts are unrewarded, he loses much real pleasure. More than half the intense enjoyment of fly-fishing is derived from the beautiful surroundings, the satisfaction felt from being in the open air, the new lease of life secured thereby, and the many, many pleasant recollections of all one has seen, heard and done."

"It is only the inexperienced and thoughtless who find pleasure in killing fish for the mere sake of killing them. No sportsman does this. "

"When the beginner can cast his fly into his hat, eight times out of ten, at forty feet, he is a fly fisher; and so far as casting is concerned, a good one."

"It is well known that no person who regards his reputation will ever kill a trout with anything but a fly. It requires some training on the part of the trout to take to this method. The uncultivated, unsophisticated trout in unfrequented waters prefers the bait; and the rural people, whose sole object in going a-fishing appears to be to catch fish, indulge them in their primitive taste for the worm. No sportsman however, will use anything but the fly, except when he happens to be alone."

"When you fish with a flie, if it be possible, let no part of your line touch the water, but your flie only."

"It seemed as if I might next cast my line upward into the air, as well as downward into this element which was scarcely more dense. Thus I caught two fishes as it were with one hook."

"To him, all good things -- trout as well as eternal salvation-- come by grace and grace comes by art and art does not come easy."

"And this our life, exempt from public haunt
Finds tongues in trees, and books in running brooks,
Sermons in stones, and good in everything.
I would not change it."

"I am haunted by waters."

"All the charm of the angler's life would be lost but for these hours of thought and memory. All along the brook, all day on lake or river, while he takes his sport, he thinks. All the long evenings in camp, or cottage, or inn, he tells stories of his own life, hears stories of his friend's lives, and if alone calls up the magic of memory."

"O, sir, doubt not that Angling is an art; is it not an art to deceive a trout with an artificial fly?"

"The fisherman has a harmless, preoccupied look; he is a kind of vagrant, that nothing fears. He blends himself with the trees and the shadows. All his approaches are gentle and indirect. He times himself to the meandering, soliloquizing stream; he addresses himself to it as a lover to his mistress; he woos it and stays with it till he knows its hidden secrets. Where it deepens his purpose deepens; where it is shallow he is indifferent. He knows how to interpret its every glance and dimple; its beauty haunts him for days."

"Go softly by that river side
Or when you would depart,
You'll find its every winding tied
And knotted round your heart."

"Here comes the trout that must be caught with tickling."

"A man may fish with the worm that hath eat of a king, and eat of the fish that hath fed of that worm."

"If fishing is like religion, then flyfishing is high church."

"Fly fishing may be a very pleasant amusement; but angling or float fishing I can only compare to a stick and a string, with a worm at one end and a fool at the other."

"To me heaven would be a big bull ring with me holding two barrera seats and a trout stream outside that no one else was allowed to fish in and two lovely houses in the town; one where I would have my wife and children and be monogamous and love them truly and well and the other where I would have my nine
beautiful mistresses on nine different floors."

"It seemed to be one of those nights when a well-cast Argyle sock would have caught a trout."

"He divided the world into flyfishers and lunatics. He became manic during the hatch periods and depressive out of season. He had paranoid fits that his children wanted to roast marshmallows with his Payne rods. He accused the IRS of spoiling Opening Day for him each year. He haunted New York's garment district like a hog after truffles, searching for scrap pieces of fur to put into his dubbing blender. One or two of these and similar qualities you will find in your average basic fly fisher... "

"I cast my own way. I use my wrist a bit too much, my backcast often goes too high, I have been known to slap the water (fore and aft), my puddle cast too often collapses like a mess of spaghetti. But most of the time I get the business done - each year a bit more handily. Isn't that what it's all about?"

"It's better to be the fisherman than the rower."

"As much fun as I have shopping and dreaming in the winter, it's always better when spring comes and I'm back out on the neighborhood streams, fishing with real fishermen. These people, by and large, are not catalog models. Many of them dress in camo and are untidily bearded. Some have huge pot bellies and some sport scab-like patches on their waders. Most scramble clumsily out of battered pickup trucks to whack 'em with beadhead nymphs. This is where I belong."

"The first desideratum is to find time to go fishing. There is a rub in the case of most of us. We are so tied down to the pursuit of the essential dollar that we lose the best and most innocent pleasures that this old earth affords. Time flies so fast after youth is past that we cannot accomplish one-half the many things we have in mind, or indeed one-half our duties. The only safe and sensible plan is to make other things give way to essentials, and the first of these is fly-fishing."
-Theodore Gordon

"Battenkill anglers are always late for dinner, and usually need a cocktail to lighten their hearts."

"Fly fishing for bass is like eating a hamburger with a fork and knife."