A Brain the Size of a Pea

Over the past three or four steelhead seasons, I've been fishing nymphs less and less and picking up my spey rods with ever increasing frequency. This season seems likely to be the one in which I go all in; I haven't played with my nymph sticks in some time, and at this point it seems unlikely I will. Those of my friends and fellow bug chuckers that are die-hard nymphers might suggest I'm being pig headed, pretentious, or even a little bit foolish. Steelhead, they would rightfully argue, are much more likely to take a well presented nymph than they are swung flies, and no one in their right mind wants to drive several hours to the river only to be blanked. 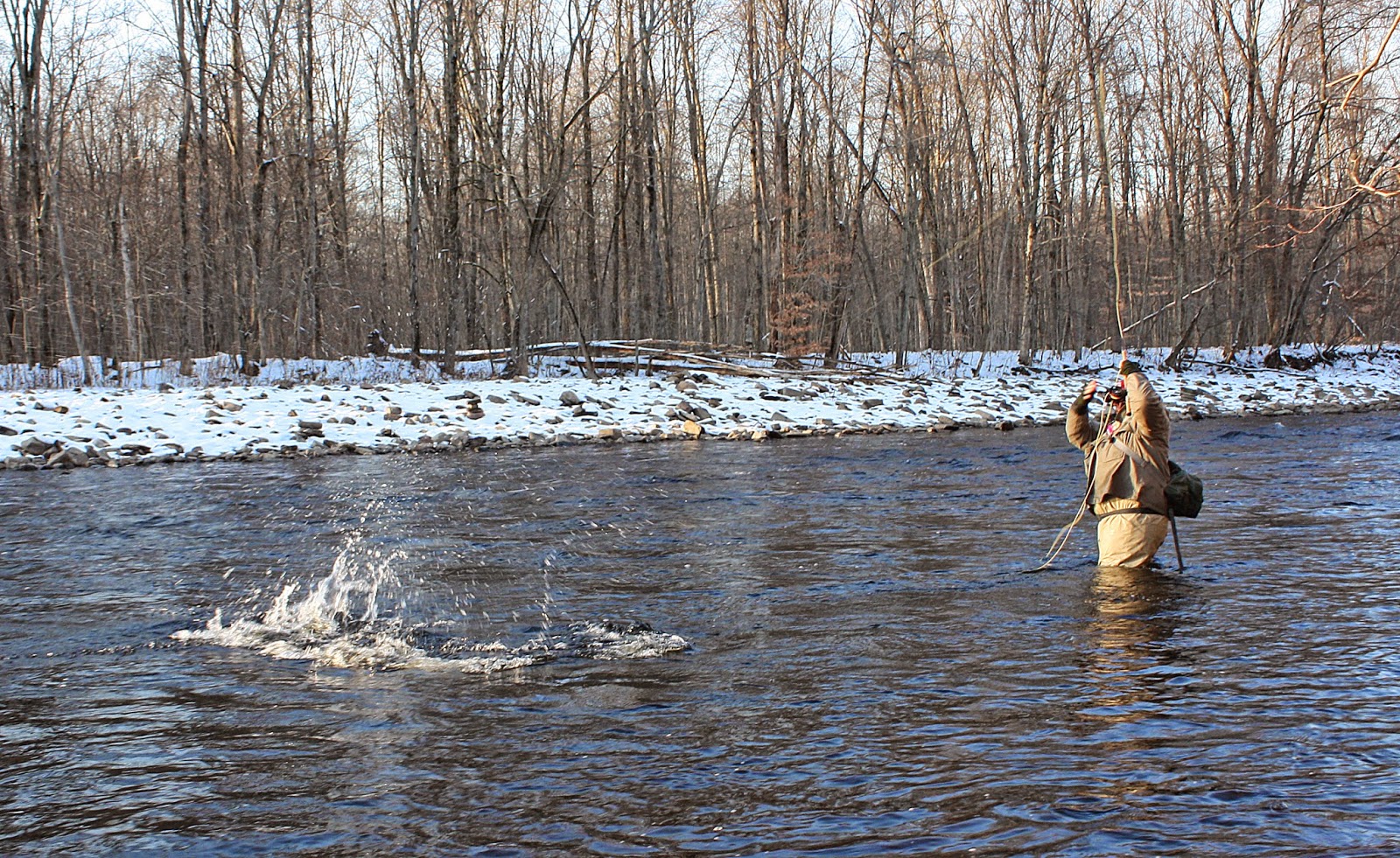 But maybe that's the point. As awful as may be a skunking at the end of three hours in a minivan, I need a new challenge, and though steelhead are great fun to catch on nymphs the act of nymph fishing has become a little too familiar. While fishing a swung fly on a spey rod is no more challenging than nymphing, the nature of it is to me still something of a mystery. Still, I catch fish. Of course, I can't be sure my catching fish on a swung fly has anything to do with my prowess as an angler because truth be told - for all their shimmering iridescence - steelhead aren't the brightest fish in the river.

Make no mistake, steelhead are among the Dumbest of animals - that's dumb with a capital D. Don't let anyone tell you otherwise. Like a toddler who has only just discovered the family pet's tail, steelhead will put almost anything in their mouths provided they can catch it without too much fuss.

Consider the following photo, which I submit as proof ... 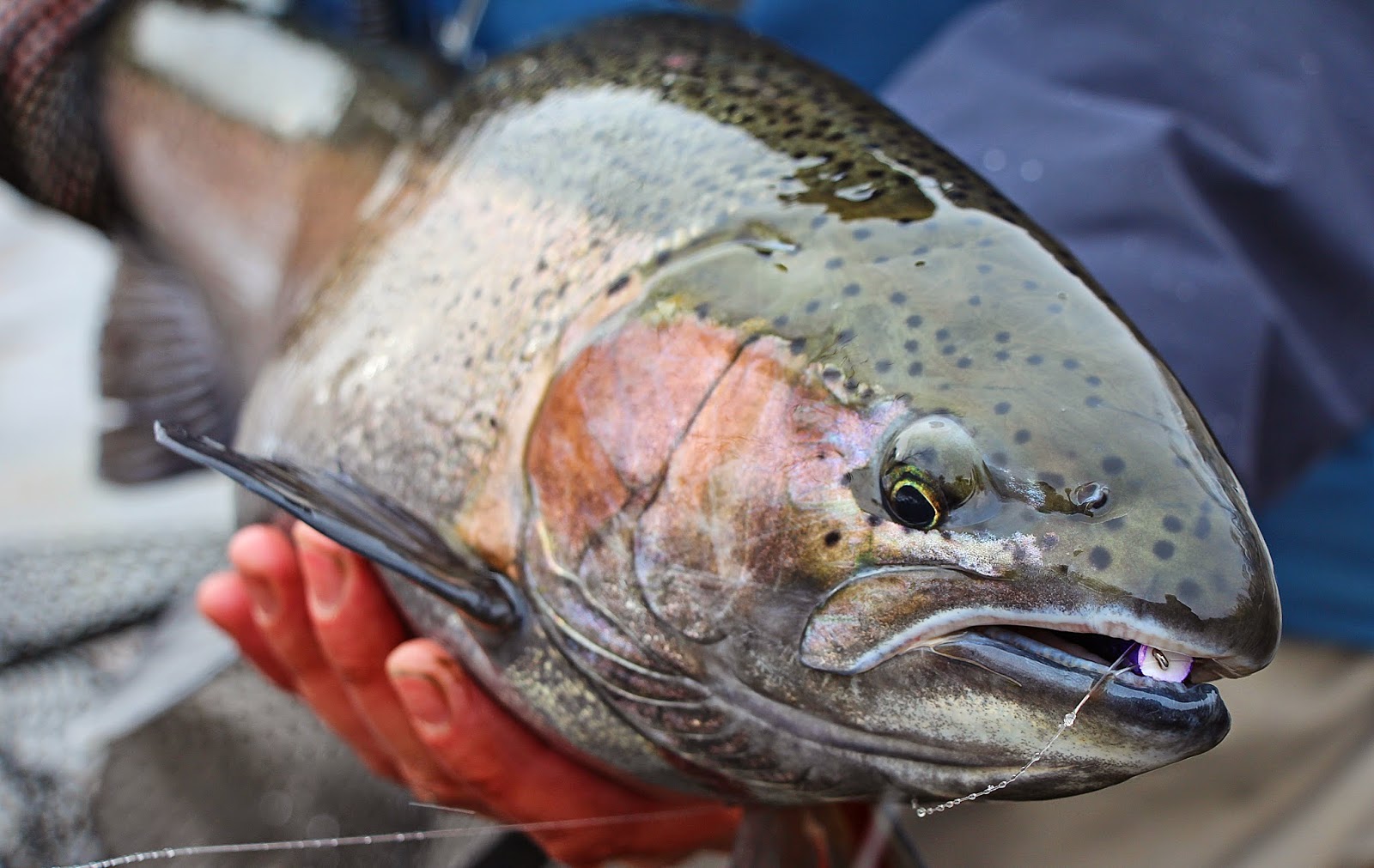 See that little bit of white peeking out from in between the hen's jaws? That little bit of white isn't a feather, a clump of marabou, or tuft of rabbit fur. It's foam - cylindrical foam painted with indelible markers and shaped into what most of us would think of as a bass bug. The last fish I caught on this particular fly was a smallmouth of maybe 13 or 14 inches. Hardly a trophy. Hardly a difficult fish to catch. And like that smallmouth, this steelhead took the fly in 18 inches of water as the foam bug shimmied its way across the tailout of a run.

Don't let them fool you.

Email ThisBlogThis!Share to TwitterShare to FacebookShare to Pinterest
Labels: She's Got The Shimmy, Skate Em Up, Spey Fishing For Dummies, Steelhead Are Dumb, Wiggle Me Timbers

Several years ago, I wrote an essay in which I proudly proclaimed, "I'm filthy. I'm unwashed ... I'm a dirty ass nympher." I suppose that to a degree, everything I wrote then is still true today. I am every bit as filthy as I ever was, but a recent trip to the Salmon River has complicated the equation by which I measure myself. That is to say that while this dirty ass nympher might be as dirty as ever I was, I might also be that much less a nympher.

You don't need to say it. I already know what you're thinking. Here we go again - another debate on the virtues of swinging for steelhead versus the moral murkiness of nymphing. 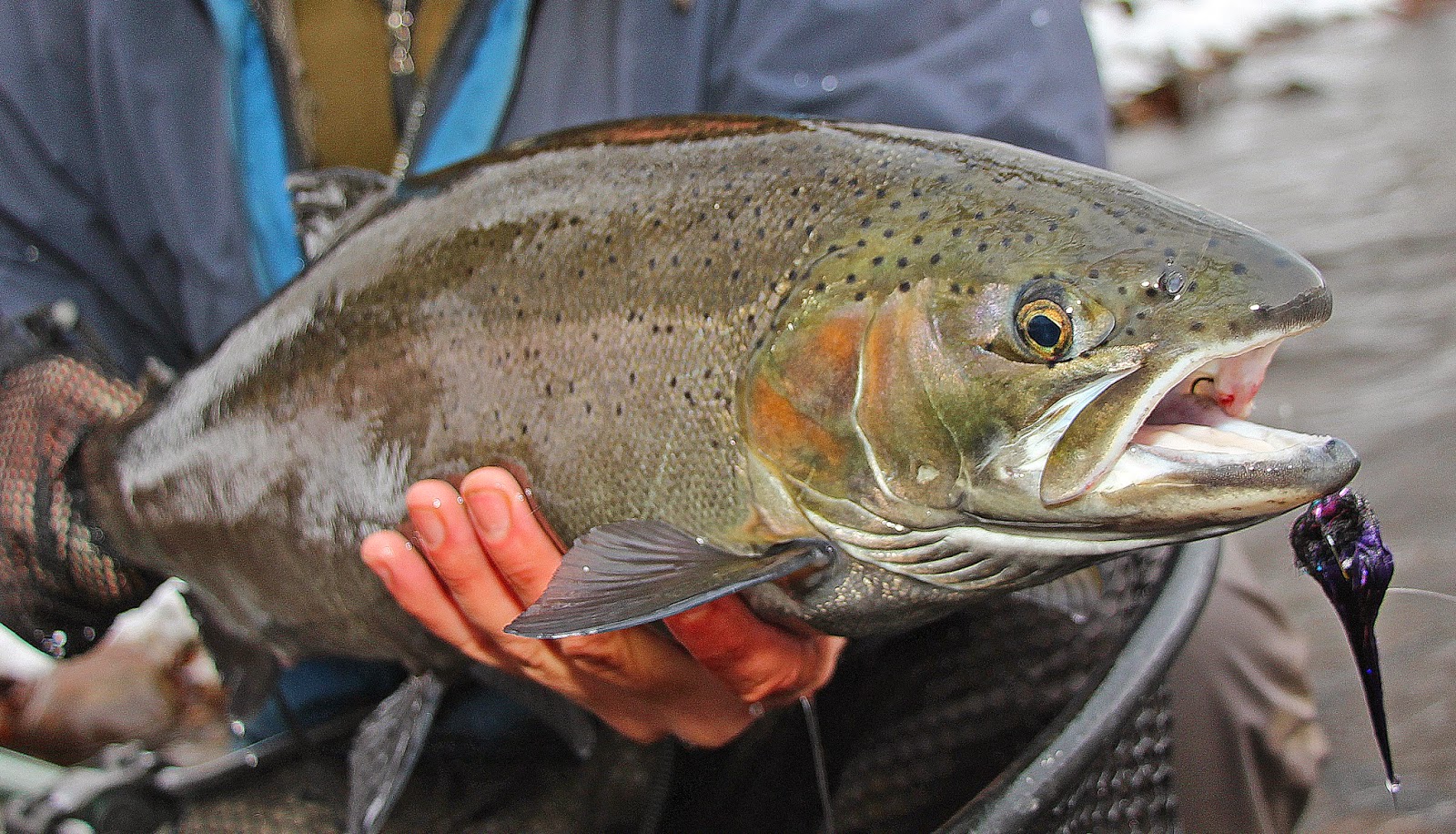 Nope. Not this time. Not from this guy. I still love nymphing almost every bit as much as I ever did. I love the simplicity of glo-bugs, sucker spawn, and pheasant tails. I'm fascinated by the notion of a 12 pound fish gorging itself on #18 stoneflies, and Great Lakes steelhead do gorge themselves on #18 stoneflies. Estaz reminds me of Christmas. Who doesn't like Christmas?

The problem with nymphing is that while I love it, I've come to love it the way I love my brother. My brother is a great guy. He and I have shared some moments; we've had some great times. When I think of him, I think of him fondly, and I miss him since he moved to North Carolina. I don't miss him, however, the way I would miss my wife and children if they were to move to North Carolina. I am passionate about my family in a way I am not passionate about my brother, and - as much as I am genuinely pained by the admission  - I've come to be similarly passionate about swinging for steelhead. There are several reasons for the change, but two reasons in particular represent the sum of my thinking. 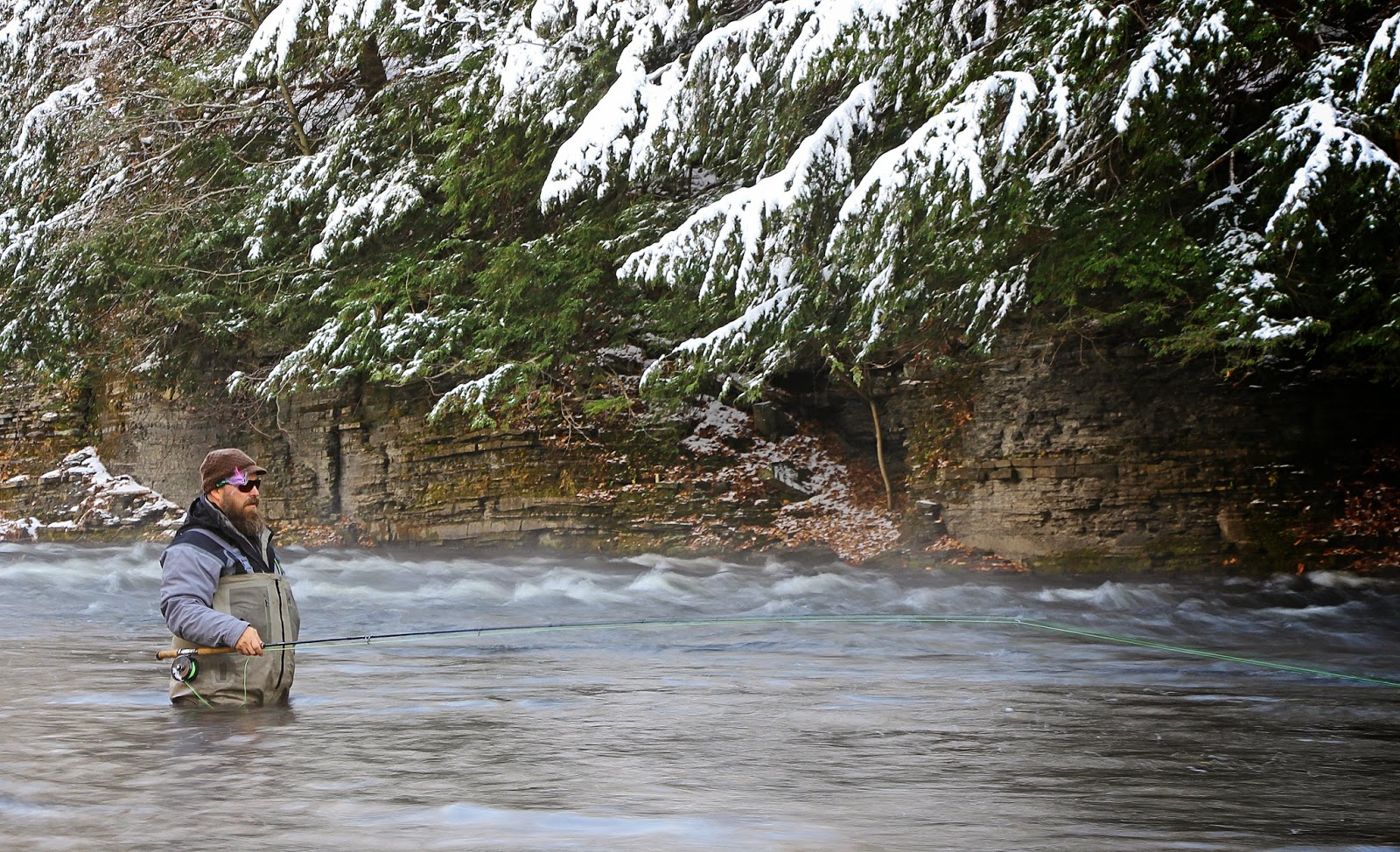 
Any bug chucker who has stayed awake all hours of the night, in wide-eyed restlessness and hopeful anticipation of the next day's fishing trip, knows what it's like to watch the early morning programming loop on History or the Military Channel. You've seen RAF bombers lumbering up a Yorkshire runway on their way to Frankfurt, Dresden, or Berlin. You've seen the German 88s spitting fire as the bombers inch ever closer to their targets. You know what flak looks like, and so too do Salmon River steelhead.

On the Salmon River, the steelhead are the bombers, and it's the anglers - bug chuckers, pinners, and gear heads alike - that play the part of 88s spitting fire at the fish as they move upstream. In some runs, steelhead will take flak from both banks for hundreds of feet at a time. Line after line after line - each tipped with a vicious Gamakatsu, Mustad, or Owner - drifts slowly, and silently searches for flesh to bite or fins to sting. And if those anglers lining the banks aren't particularly ethical sorts, then their hooks will only sometimes sting fish fairly (more on that in another post). 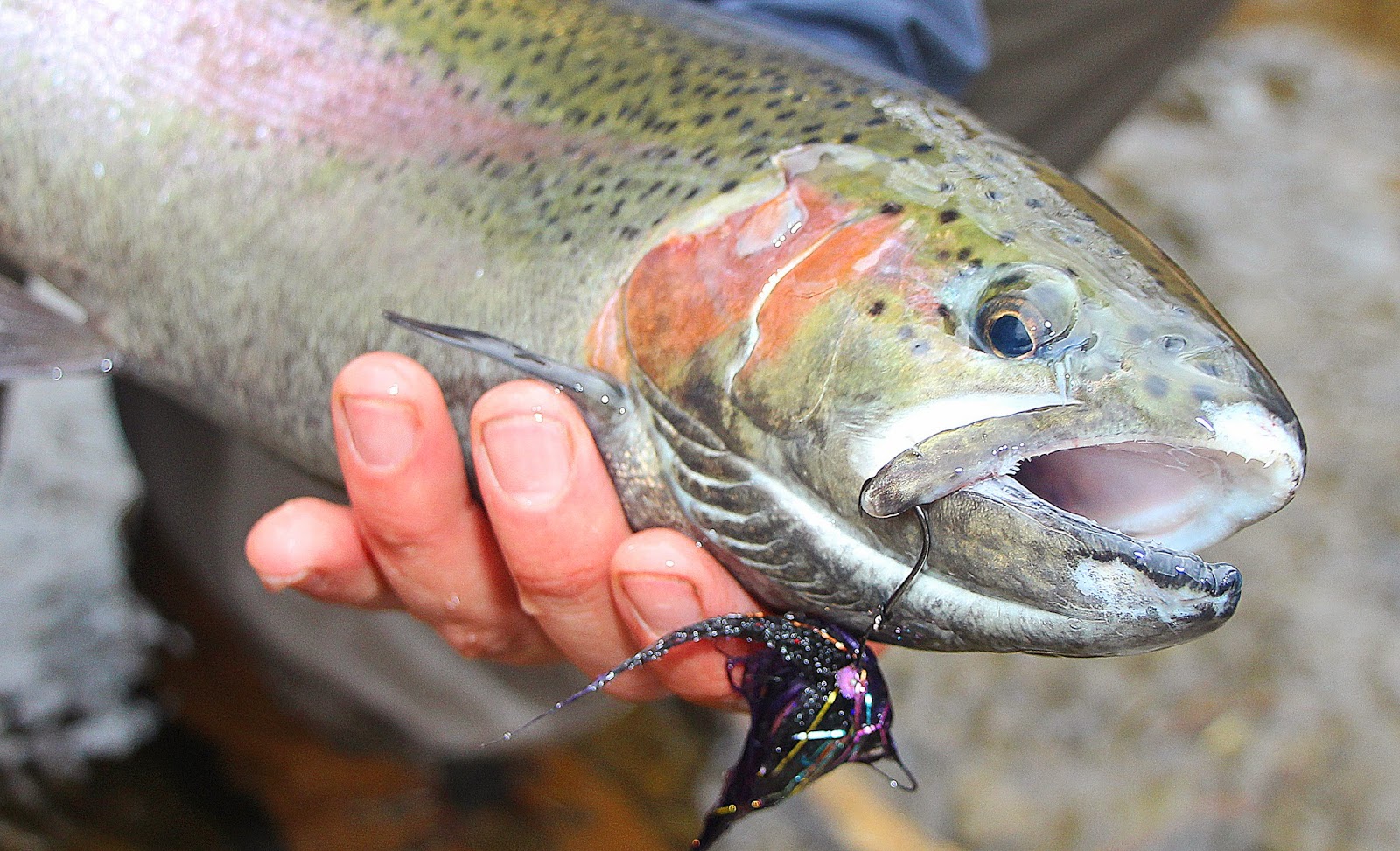 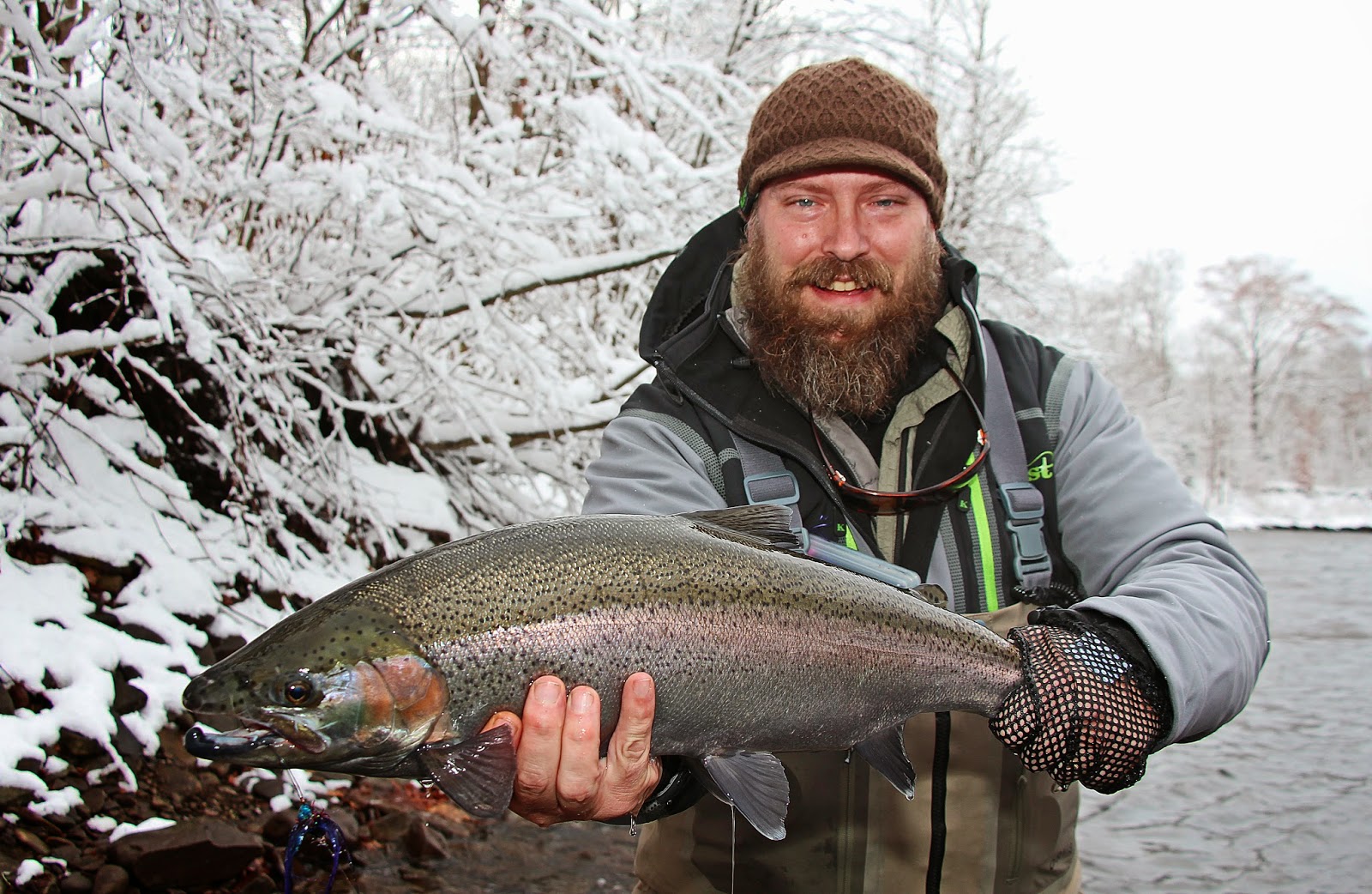 The second reason I've had my come-to-Jesus moment and given myself over to swinging flies for steelhead has been written about ad infinitum and to the point of being cliché. I'm willing to bet that anyone who lists his or her reasons for fishing a spey rod and swung flies - in any river, in any part of the world - would say the same. God it pains me to say this, but ...

The tug is the drug. 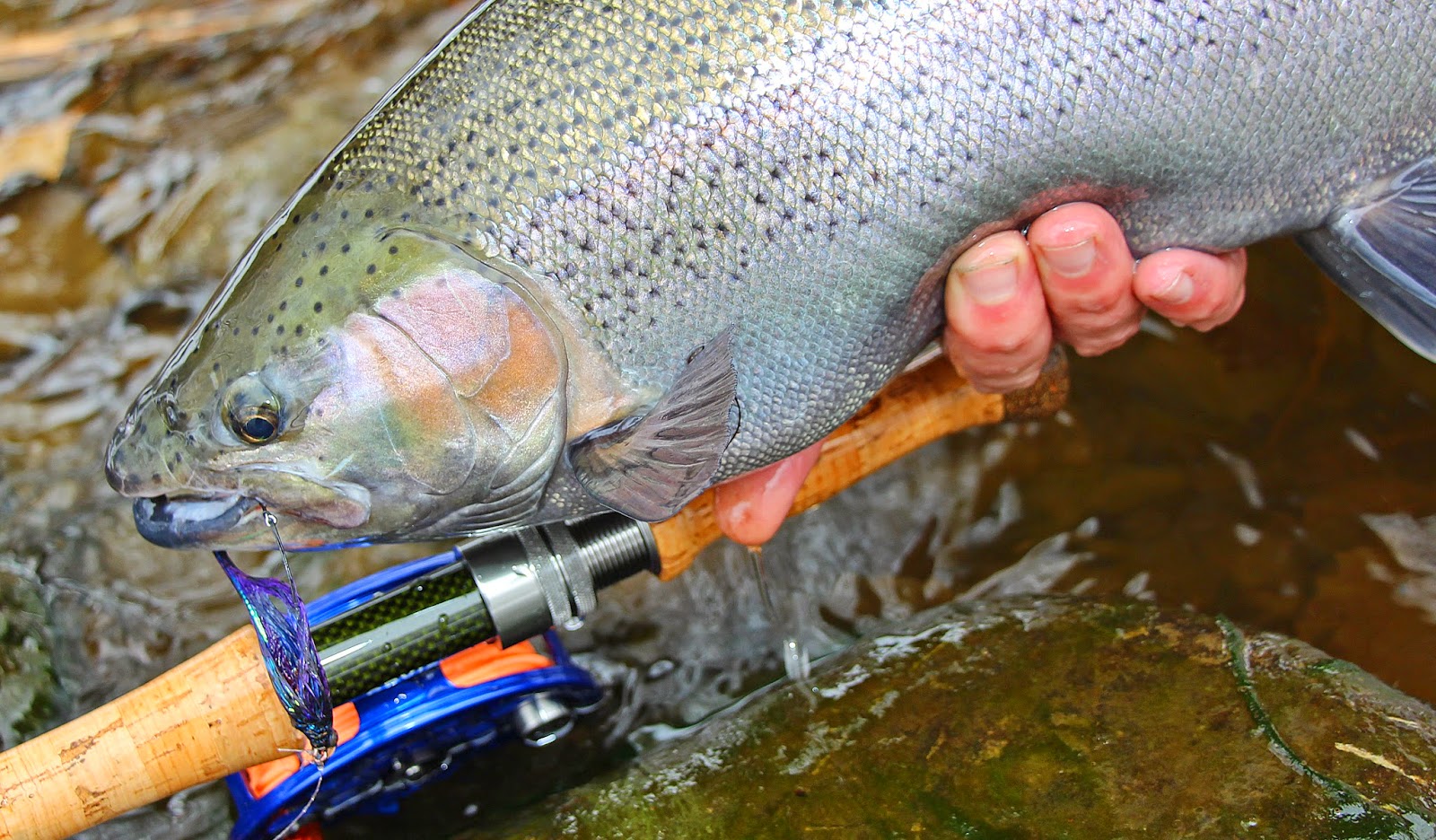 So am I still a dirty ass nympher? Maybe. Maybe not. I'm really not sure. All I can say is that last week's trip to the Salmon River left indelible impressions on both my heart and mind that are unlikely ever to fade. Even now - sitting here at my keyboard- my fingertips curl around imaginary cork and my closed fist follows an imaginary swing through an imaginary tailout. 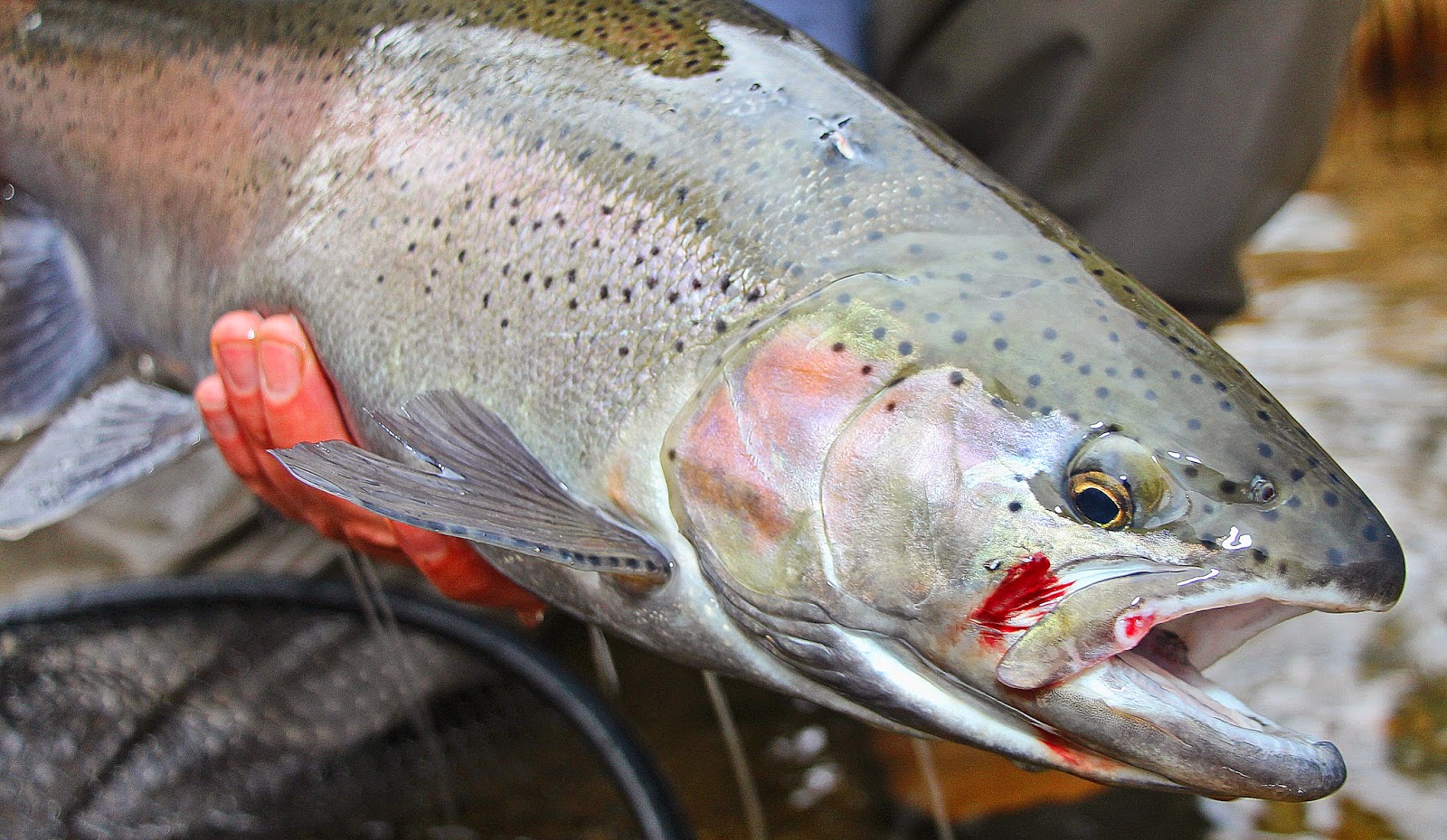