A very quick photographic summary of a year that has come to a close far too quickly ...

We need a day of steelheading without the sore shoulders that sometimes accompany swinging an Orange Heron on a 15' sink tip with the 13'6" big gun. We need eager fish. We need plentiful, eager fish. We need gentle wading, and perhaps most importantly, we need a short walk back to the car.

What we need is a run that oozes steelhead: four or five feet deep along most of its length, few snags but plenty of current breaks and structure, heavy riffle at the head and a gradual incline at the tail. Swing it or nymph it ... you'll bang 'em. We need a run with a name indicative of the kind of fishing one might expect to find there, a pool that comes complete with its own lounge chair.

We'll Get 'Em Next Time

In truth, we hooked a few fish, which was a few more than some bug chuckers hooked and far fewer than others put in the net. The fish we tagged fought well, and we nearly brought each of them to hand. Ultimately, it just wasn't meant to be.

I did manage a few shots of Pat while fighting one of the steelhead he hooked. Of course, he didn't catch the fish (my fault ... poor job of tail grabbing), but he did look sharp while doing it.

For anyone interested in such things ... Superfly was fishing a 40 year old Fenwick fiberglass rod. I'm not sure if the rod made him look better or if he brought something to the rod. Either way, it did make for a striking picture when the rod doubled over with the weight of a steelhead.

We'll get 'em next time Pat. 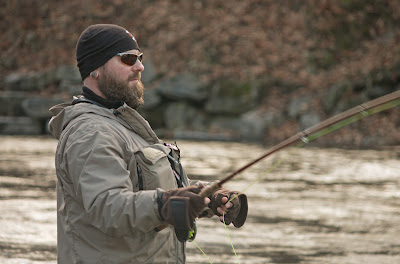 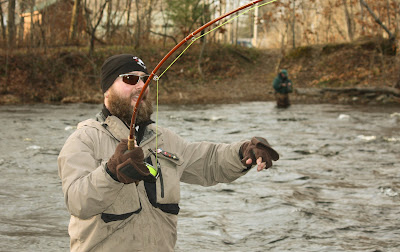 On New Friends and First Fish

It is a moment that remains crystal in one's mind regardless of the passage of time. Indelible, impossible to forget, not unlike the first time you kiss the woman you love. You're not quite sure what is happening when it happens, but you feel something you've never before felt. You're aroused, excited, and so full of hope that you think your chest might burst from the pressure. When it's over, you desperately need to feel that way again ... and again ... and again.

I remember that first fish better than I remember my last fish; it must have been twelve or fifteen years ago now. We were high sticking a run that I now know is among the most popular for dirty-ass nymphers like myself (an affectionate appellation that I happily wear with pride).  My friend and guide for the day had been quite successful, and netting his fish - there were several - had begun to sting. The occasional skipper had somehow managed to impale itself on my fly, but the river gods had so far denied me the joy of a returning steelhead. Hours into the day ...

My indicator made the drift from left to right as it had so many times before, but on this run it stopped abruptly and was dragged under the surface. I stood dumbly watching the little piece of orange and yellow balsa shoot upstream through the current. The hook set itself - almost involuntarily - as the line drew tight against the rod. A steelhead - a real steelhead, not a skipper, not a ghost - somersaulted out of the water, turned, and ran back downstream.

I never brought the fish to hand, which is - I suppose - why it swims still in my memory. My buddy suggested the chromed-up hen weighed at least 15 pounds. Who can say? She was big. She was strong. She was fast, and she was one hell of an introduction to what is arguably one of the finest - if not the finest - game fish found in freshwater. 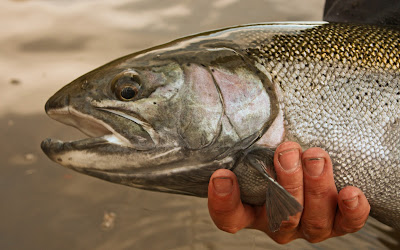 Fast forward fifteen years to the weekend before Thanksgiving, 2011. The boys and I are on the second day of a three day steelheading bender. We did well enough on the first day, but our metal-lust was hardly sated. Joining us for day two is Shawn Combs, a native Kentuckian who has never caught a steelhead. As the day progresses, he watches as the rest of the group hook fish after fish, and I can see in his eyes the same fatigue and hopeful anticipation, which I had felt so many years before.

Although he was too much a gentleman to say it, I am almost certain he thought it ...


And slowly the morning haze gave way to noon day sun; noon eventually made its move toward night. The hours slipped away, and Shawn went without a pull. Eventually, there were just minutes left in the day. Like soldiers defending a fallen comrade, we converged on the crestfallen Kentuckian. Tippet is cut. Knots are tied. And then with only moments left in the evening ...

Shawn hooked a steelhead.  A steelhead - a real steelhead, not a skipper, not a ghost - takes Shawn's fly and shoots off downstream. Shawn tried frantically to bring the fish under some semblance of control, and just when it seemed he had gained an advantage, the fish turned straight back at him. It leaped only a few feet from our intrepid steelheader, and just as it quickly as the chaos began, so too did it end. The fish was off.

As we shouldered our gear for the trek back to the car, I took a moment to console Shawn.

"Yep. Schooled me. You did a much better job than I did."

"Hell man. This is steelheading. All you ever have is hope." 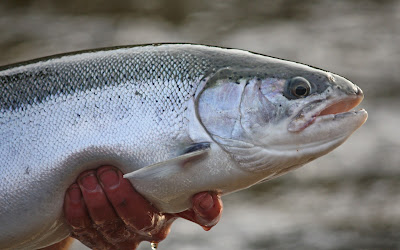 I didn't have the heart to tell him I lost my second, third, and fourth fish too.