Nothing is so Beautiful

The world - it seems - has finally turned. Snow storms have given way to rain clouds; the cabin fever that so often plagues snow weary bug chuckers (even those of us who chase winter steelhead) has at last begun to subside. There are finally signs of a reprieve. There is light at the end of the proverbial tunnel. There's hope.

"Nothing is so beautiful as Spring –"

I have to admit to being something of an Orvis guy. Most days I look like I stepped right out of the catalog. Granted, I once worked for Orvis in Vermont so it could be I've an excuse - not that I necessarily need one. I've still many friends who are employees of the company, some of whom are featured in the video I've attached to this string. Whatever your feelings about Orvis may be - and I realize that the company suffers no shortage of detractors - I have to say that some of the people who work there are among the finest folks I know. They're dedicated to producing a quality product that any bug chucker would be proud to own.

And if you are one of those nay-sayers then I've something of a challenge for you. Fish one of the new Orvis sticks - an H2, Access, or perhaps even the new Clearwater - just for a day. I'll even let you borrow one of mine. I can almost certainly guarantee that you'll be pleasantly surprised - even if you can't bring yourself to admit it.


And in reading this, please keep in mind that I haven't a history of propping up any company. In five years of maintaining this blog I've never done a product review. I don't receive compensation for any of my efforts (regardless of how much I might like to be compensated) - not from Orvis or from the representatives of any other company.  If I give my opinion then you can be sure it is my honest opinion.

While in his early twenties, Shawn Brillon (the current Orvis fly and fly tying product developer)  was a collegiate wrestler and power lifter. He wasn't nationally ranked, but neither was he unsuccessful; I've seen proof in the form of trophies and VHS video (imagine Sloth from the Goonies in a unitard). Now over forty, Shawn is still one of the strongest men I know, but every bit a gentle giant (in a stocky, Gimli the dwarf kind of way). I wouldn't want to go three rounds with him anymore than I'd want to bathe in brisket drippings and tangle with Lily - Shawn's outsized bull mastiff.

I mention all this not to inflate my friend's already substantial, mastiff sized ego, but in the hopes of impressing upon you just how drastic was the weather's change.

We were anchored near the head of one of the river's largest pools. The riffle to our front wore the swollen, grey-green raiment of the previous evening's rain; we almost certainly should have been fishing some skinnier water, but at the moment the sun was shining and the boat was safely anchored in an eddy that formed along the near bank. For lack of any active fish, each of us enjoyed the rhythm of casting (as much as heavy sinking lines attached to tungsten laced streamers can be rhythmic) and the moronic, testosterone-laced banter that usually accompanies a day in a drift boat.

I don't know that any of us paid much attention when the first dark clouds rolled over the peak of the mountain. We knew that the weather was likely to change; sunshine never lasts on the first of April, and rain had been part of even the most hopeful forecast. When the sun disappeared altogether, however, we couldn't help but take notice. We tried to laugh off the sudden darkness as we pulled our rain gear out of the boat's dry-boxes, but each of us realized that we were still very early on in the float. Nasty weather - if at all prolonged - was going to make for a very long day.

No sooner had we donned our semi-breathable, occasionally water repellent shells and tightened the belts around our waders then the first drops descended on the boat. Before long the river gods let loose their full fury, and we were assaulted by phalanxes of rain attacking from all sides. Sitting in the bow - slightly miserable and doing my best to disguise my shivering - I found myself wishing I had done the right thing and kept my appointment with Dr. White, my proctologist.

But wishing didn't get us off that river. In fact, my wish seemed to have quite the opposite effect. Instead of being magically transported to the take-out where a scantily clad Kate Upton eagerly offered to teach us the Cat Daddy and then crank the boat up onto the trailer - we were instead blasted with winds that rather ironically took our breath away. The gusts were so strong - in fact - that Shawn's low profile Clackacraft eventually pulled its 35 pound anchor free of its cobblestone mooring. Like a zephyr we slid upstream and across the riffle straight into the jagged rocks that lined the far bank. Generally speaking, if one owns a fiberglass drift boat then it is a good idea to keep that splendid fishing platform as far away from knife-edged rocks and outsized, boat-eating boulders as one possibly can. And so we come full circle.

Keeping the Clack away from the rocks required all of Shawn's considerable strength. He cut into the water as deeply as the Cataract oars and his power-lifter's frame would allow. The boat slowed to a stop only inches from the rocks, and with a pit bull's tenacity Shawn pulled her back to the relative safety of slack water.

"She's a hell of a boat," he said slightly winded as the anchor once again found its bite.

"With a hell of a skipper," I replied.

And so went the remainder of the opening day of the 2013 trout season. Rain came and went; the torrents grew worse with each renewed assault. On a vision quest of sorts, Shawn refused to relinquish the oars; whatever demons he may have had were certainly exorcised (or perhaps exercised) by the effort. By the time we reached the take-out (the otherwise Uptonless take-out) we were soundly beaten. Eight hours on the water had brought a single strike and no fish to hand. We were relatively dry, but the damp air was relentless; our faces and our hands were numb. Every fifth or sixth breath would bring chills and shivers from our cores. All of our fly boxes were lighter when we finished the day than when we began; at least one spool of tippet had been emptied.

"How?" you ask. How did we manage to enjoy ourselves in spite of the river gods' bad intentions? One word ...

Near the start of the float we stopped for breakfast. A sixty year-old Griswold #7 fry pan and the dual burner Coleman made quick work of a dozen eggs and a pound of slab bacon. That bacon stayed with us for the remainder of the day - rain and wind be damned. The pungent aroma permeated our clothing; the greasy sweetness coated our tongues. Every breath - stained with the slightly acrid taste of salt and pork fat - was a mental middle finger to the river gods and their bad intentions. And therein lies the moral of an otherwise anti-climatic trip report.

There is no such thing as a bad fishing trip. Regardless of the gods' malice and our own ineptitude, there is always a worse way to spend the day. Every trip - every last one - brings us some twist, a new rub that makes us stand up and take notice. I would trade any day spent away from the river for even the worst of days when I'm wading her currents because no matter how bad it is there is always going to be that one little something.

No matter how bad the day might be, we'll always have that bacon.

Off to a Good Start

We're only a few days into the 2013 trout season, but we've seen a few hopeful signs. The rivers and their tributaries look healthy. There is still some snow pack left in the mountains. We're yet to see an angler carrying a creel, and the fish have been in all the places we might hope to find them.

Here's to hoping the trend continues ... 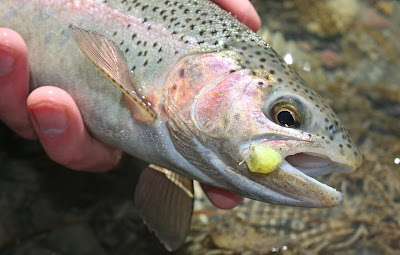 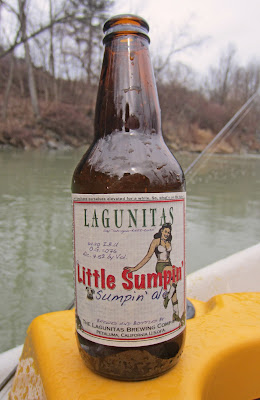 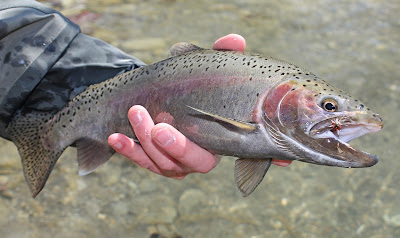 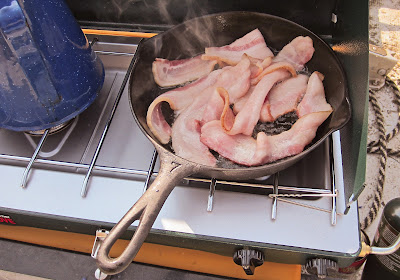