Ten or twelve years ago, fly fishing - like much of the rest of the world - began with earnest to feel the impact of the internet. Data driven bug chucking started with message and bulletin boards, those online forums that allow bug chuckers to connect with folks of a similar mind, swap ideas, and - more often than not - degrade each other. These boards are ubiquitous, and continue here and there with varying degrees of success.

Fly fishing retailers were quick to recognize the potential of the internet for reaching customers and expanding business. Today, a fly shop cannot be truly competitive if it fails to present itself to digital anglers - as eager for online shopping as they are for an evening spinner fall. This phenomena has proven problematic for the local fly-shop that caters to a relatively small group of semi-loyal, resident bug chuckers. Unfortunately, loyalty does not pay the bills, and oftentimes it is a quality that lasts only so long as the span between discount rod sales on Cabelas.com.

Perhaps the greatest impact of the Web on bug chucking has been in its unique ability to connect people who may not otherwise meet, and allow them to share not only their ideas, but also their water. I must admit that I am extremely reluctant to share my rivers and streams (mine in the sense that their meandering currents are as much a part of me as is my too thick mid-section or too thin hair) with people I haven't known but through an online forum or social media. I am suspicious by nature, and I do not trust relative strangers to respect or appreciate the water as I do. If I am honest with you (and with myself), there is also a certain degree of selfishness at work. This may be one of the great failings of my character, but each of us knows that there's just no changing a bug chucker's nature.


I mention all of this by way of illustrating just how significant is the moment when I ask you - my cybernetically connected brother of the angle - to join me for a day on the water. Understand that on those first few outings, I will not take you to my favorite water. I may not even take you to one of the rivers I fish with both enthusiasm and regularity. What manner of fly flinger would I be if I simply handed the grail to someone who may be - regardless of appearances or reputation - a non believing heathen? I need to get to know you beyond the limits of email, Facebook, or this blog. I need to trust your character the way I trust in the morning's hatch or an afternoon spinner fall. That is to say that I need to know - with absolute and crystalline certainty - exactly what is happening even when I am not on the water. 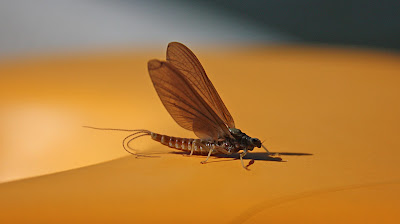 A large part of that trust comes from your willingness to reciprocate kindness with kindness. An invitation to fish with me should be matched by an invitation to fish with you. This is more than simple courtesy (although it certainly is that). This is and has been protocol ever since we bug chuckers first began to compete for dwindling resources, ever since we began to keep secrets from each other. Quid pro quo. If I risk a revelation, will you do the same?

Please take a moment to consider everything you enjoy about a day on the river: speckled, spotted, or striped fish, the rhythmic metronome of well executed casts, the flies you proudly tied in the wee hours of the morning - between work, diaper changes, dance recitals, soccer games, and the assembly of a backyard deck. Consider the canticle of the river as it passes over bedrock, the perfume of budding evergreen, and the thunderous strike of an outsized predator as it wraps its vomerine teeth around your streamer just as the fly slaps the water. Consider all of this and the tie that binds it together.

We take it for granted, don't we? Even though it is the well spring of our shared obsession - the vehicle that daily conveys our collective distraction - we rarely stop to consider the water in which we wet our lines. In recent months, I've come to appreciate my rivers - and the water that shapes them - in a way I previously had not.

Late last summer, Tropical Storm Irene struck my area with, "great vengeance and furious anger," and rivers that usually flow at 150 to 300 cubic feet per second, were flowing at over 40,000 cfs.

Try to imagine the volume and ferocity of the water as it blew its banks, and the implications of what has been described as a 500 year flood on the river valleys and adjacent communities. One hundred year-old trees snapped like so much kindling. Bridges and roads disappeared. Homes - and the lives and memories they represented - were simply swept aside. In one case, part of a cemetery was washed away; the receding river left caskets strewn along its length. Damage estimates ranged from one billion to two billion dollars. Naturally, these estimates did not account for the impact of the storm on angling and other recreational activities.

For well over a month following the storm, the rivers that we collectively call our home water were tinged with silt, and like a plague this silt had the effect of infecting all it touched. Grey-green grime covered everything. Every inch of river bottom took on the chalky whiteness of sun dried clay; low growth vegetation along the banks withered and died as a result of having been covered with a thin layer of muddy death. In certain spots, one could clearly see a mud line cutting across trees - 15 feet or so above the river's surface. This line marked the spot at which the rivers crested.

The result was that the autumn's hatches generally failed to appear. Nymph fishing usually proved fruitless, and even ripping a streamer through likely runs rarely drew a follow. Usually, high water through the summer is a boon, but at the close of last season the prognosis was bleak. The mood among the river's anglers was both pessimistic and forlorn. What would the spring bring?

Early April helped to alleviate the worries of bug chuckers and gear heads alike, but while the rivers' fish appear alive and well, the mood is guarded. Much of the silt from last fall remains. In a normal year, routine spring floods would have cleaned the previous season's crust from the river bottom. This year, however, we've witnessed record lows in the same rivers that were well over their banks just seven months ago. 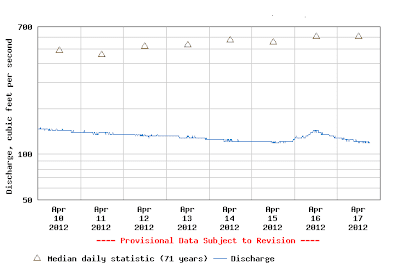 With the water this low - and several days experiencing air temps near 80 and 90 degrees - we've been fishing dry flies during a hendrickson hatch that likely began mid March. Hennies don't usually make their first appearance until the last week of April or the first of May. If the season continues as it is, we might be fishing sulphurs come the third second week of May. The two pronged assault of excessive siltation followed by extremely low water does not portend good things to come.

Our recent trips to the river - however successful as they've been - have each ended with a certain sense of foreboding. As low as it is now, where will the water be in another month or two? Where will the water be come July and August? What will happen to the trout if the springs aren't refreshed?  What becomes of a river if she hasn't any water? Perhaps even more to the point ...

What becomes of a bug chucker if he hasn't any water in which to chuck bugs?

When choosing friends, consider all the variables that matter in the context of successful relationships. Start with this question: "Does my potential friend own a drift boat?" If the answer is "no" then proceed to carefully analyze all other variables (i.e. trustworthiness, sense of humor, oral hygiene) before committing to the obligations of friendship. If the answer is "yes" then bribe your way onto potential friend's boat with a cooler full of expensive beer and cheap "pink-slime" sausages. After the float, propose marriage if you live in a state that will sanction the union.

This wasn't our first, first. We've done the dance more times than I care to admit. There was a brief intermission some years ago while I was off playing soldier, but aside from that short hiatus, fishing the opening day of trout season has been - for some twenty odd years - our tradition. We're often relegated to dapping flies in the tributaries of the tributaries, as the main river is usually a turbid juggernaut on the opener. When she has obliged the early season advances of intrepid bug chuckers, she's been amiable company and a joy to fish. 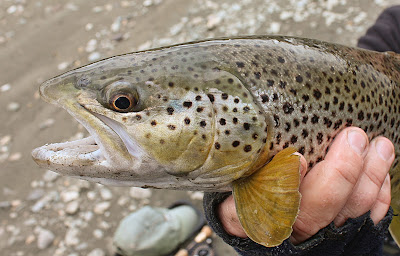 I'm reminded of one such April 1st, five or six years ago maybe, when the river and weather gods conspired to shape a near perfect opener. The water was slightly off-color and perhaps a touch high, but otherwise perfect for streamers on a sink tip. The previous days' clouds had parted, and the sun warmed both water and anglers alike. The fish were eager. The big fish were even more eager. The day began with a 20" trout in my net, and finished with a much larger specimen spitting the hook and giving me the piscatorial equivalent of the middle-finger with its outsized pectoral fin. 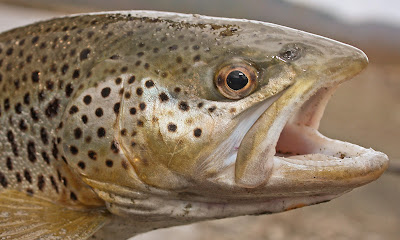 Going further back, ten or twelve years perhaps, there was a similar opener. We swung big flies, on big water, for big fish, and this year was remarkable for all the same reasons. The weather was mild for a northeastern April, the company was affable, and the river was spot on. Everyone with whom I've spoken - bug chuckers and bait dunkers alike - reports having had a tremendous day. A few fortunate fly flingers even managed to find some fish looking up, and taking hendricksons - quite greedily - off the surface.

Alliteration aside, I suppose that the hope of fishing the big water is part of the charm of opening day. As much as anything else, the opener is about not knowing what the opener might bring. It's about fresh starts and second chances. It's about the hopeful anticipation that the river gods will smile us, and give us a first day to which we might compare all the days that follow.
Posted by BKill at 4:58 PM 1 comment: