The Great Salmon Dud of 2014 and Adam Touches a Boob

Anyone who fishes with regularity for Great Lakes steelhead (and yes ... they are steelhead ... I hope you choke on your pretension if you roll your eyes at the thought)  likely spends the better part of the summer in hopeful anticipation of the fall. Fall is when everything comes together for a steelheader. By late August or early September, the first of thousands of king and coho salmon will start to show in the lakes' tributaries, and by October the salmon run is usually on in earnest. Following the salmon - intent on gorging themselves on eggs and flesh - are the steelhead that sustain so many of us throughout our typically brutal northern winters. Unfortunately for our salmon fishing brethren, 2014 has been - relative to the past few years - a bit of a dud. 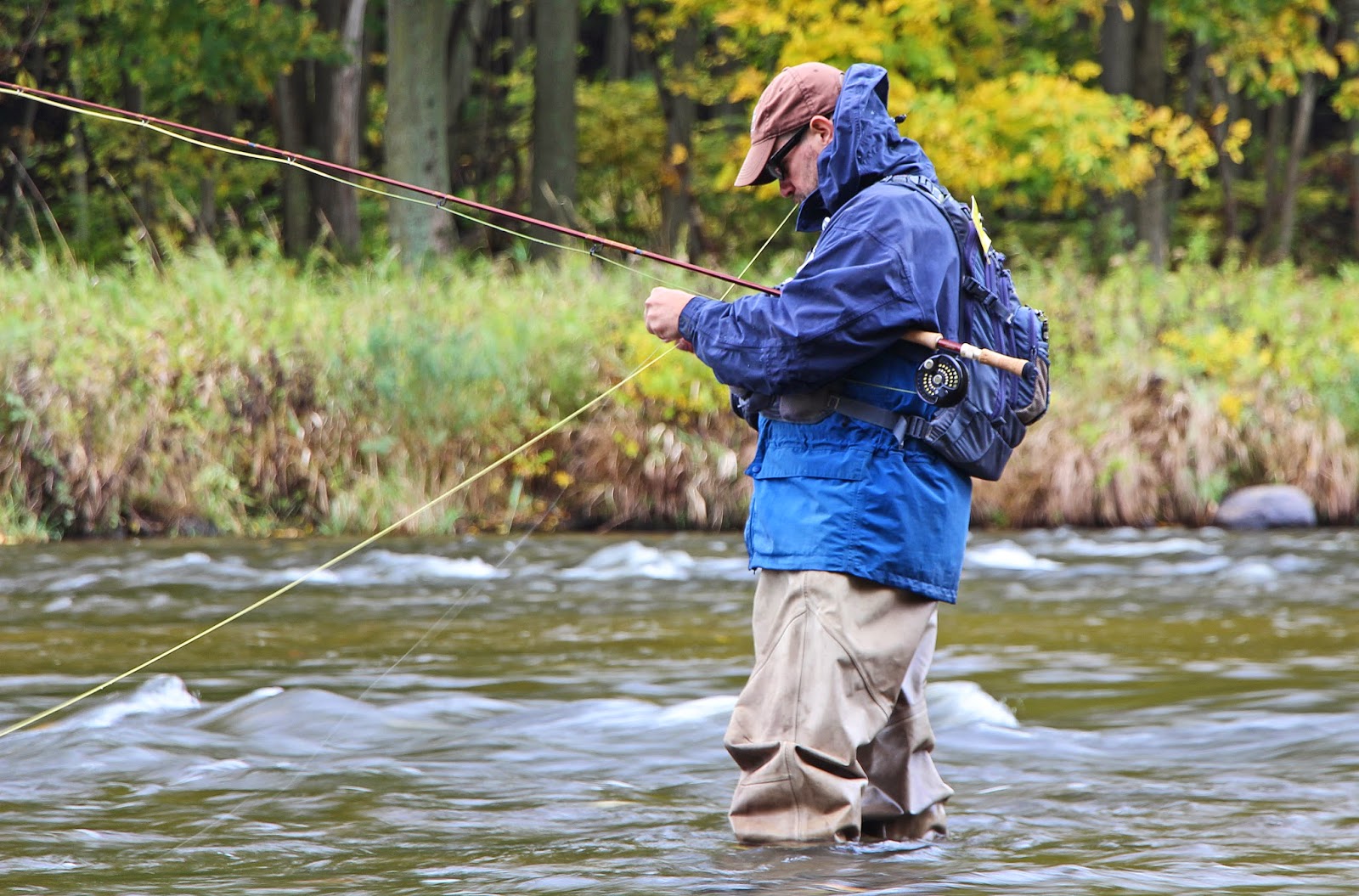 As I walked the banks of New York's Salmon River this past weekend, I was struck with a thought that I couldn't quite articulate. Something was missing, but for the better part of the day, I couldn't quite put together just what it was. There were fish - at least there seemed to be. There were fishermen - as many or perhaps more than I have ever seen along the river's banks. I just couldn't put it together; everything seemed to be as it should have been. Ben had the epiphany before I did.

It was the stink. That distinctive Salmon River stink was missing. In a normal October, the river is lined top to bottom and side to side with the putrefying carcasses of spawned-out kings and cohos. The stink - an aroma slightly reminiscent of swelling, sun blanched, fly infested, road slaughtered possum - permeates the air from the estuary upstream to the Brookfield dam. In a normal October, the stink hangs over everything and offers quiet reassurance that there are fish to be had. At this point in the year the stink is entirely absent. 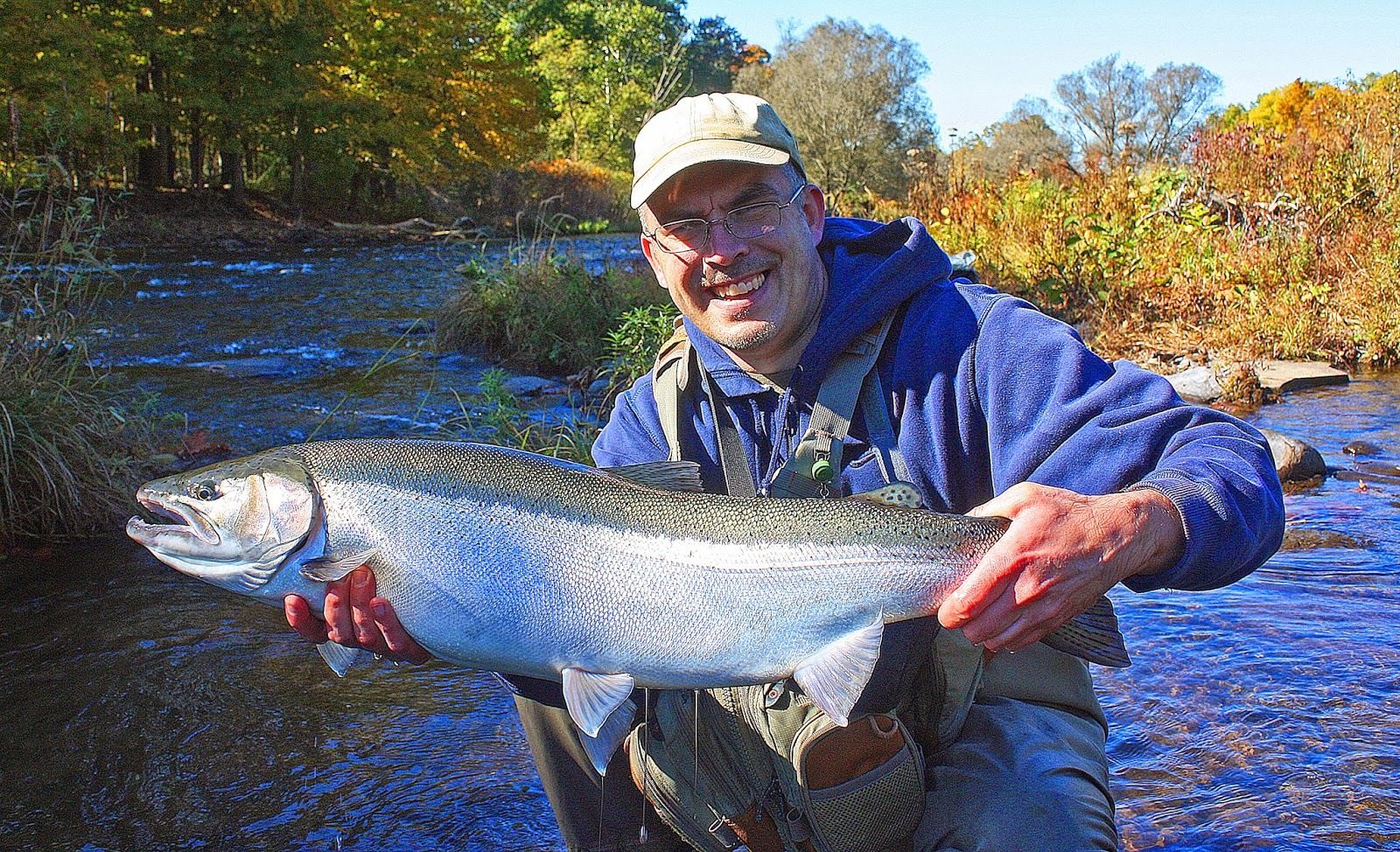 If a bug chucker is looking for salmon then there are some salmon to be found, but actually finding them may take a little more work than usual. There are, however, plenty of steelhead, and this past weekend those steelhead were our saving grace. All three of us hooked a chromer. Ben lost his fish as a consequence of the insipid stupidity of one of the Salmon River's many f@#ktards. The fish took off on a downstream run in front of the f@#ktard and his group, and rather than move as courtesy and intelligence dictate, f@#ktard chose to remain in place. Ben's line drew across f@#ktard's legs and the fish was free.

While this scenario was not unexpected - we were fishing the Salmon River on Columbus Day weekend after all - losing that first chromer of the season stings especially when the loss could have been avoided. For my part, I lost the steelhead I hooked because I'm a chucklehead. I wasn't paying attention in the moment that paying attention mattered most, and the fish took advantage of my day dreaming to demonstrate her superior focus and determination. So it goes. 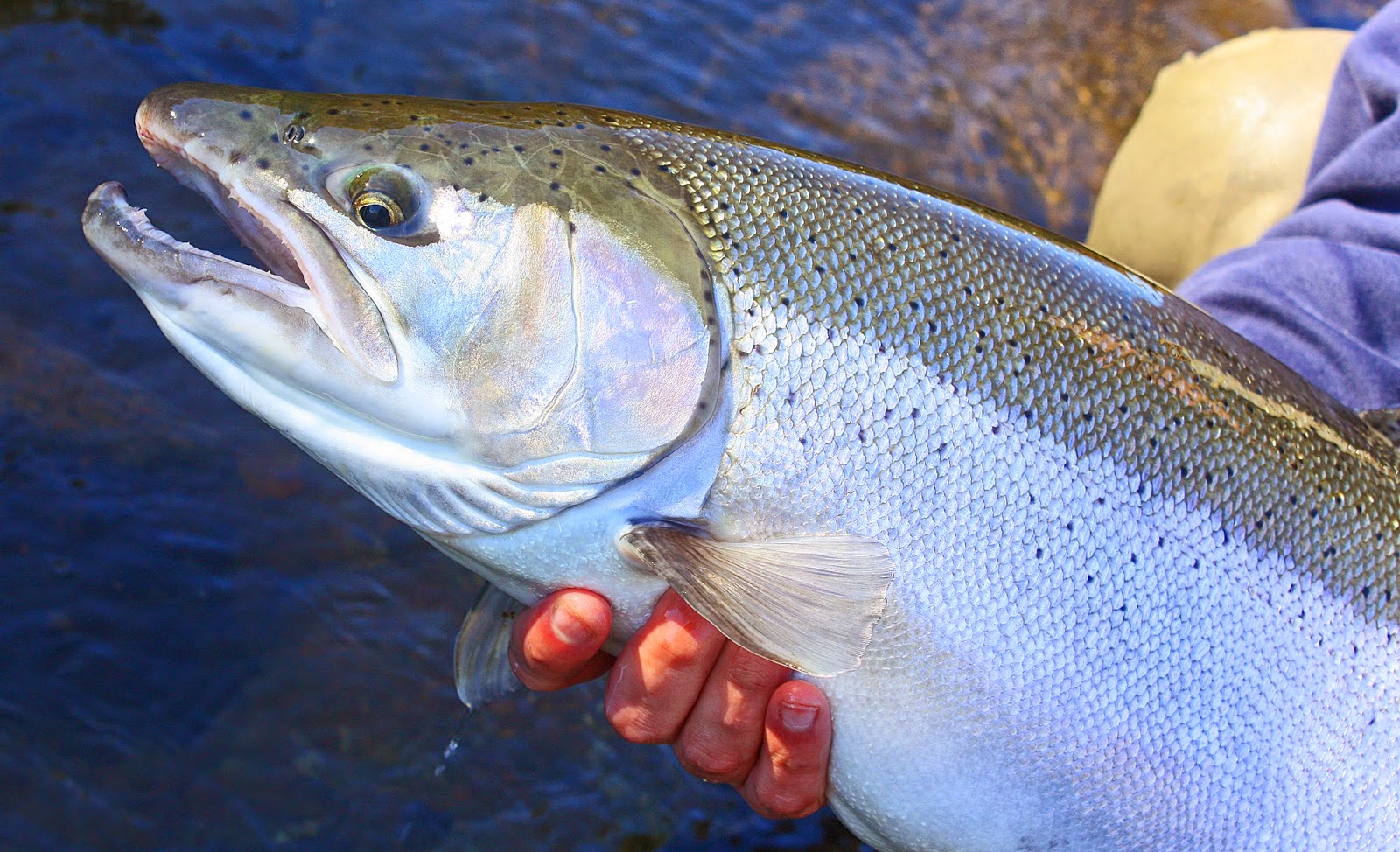 Adam, however, remembered to take his Ritalin before we wadered-up, and he was alert and ready when a beautiful chromer of some 12 or 13 pounds decided to take his fly and run back into the lake. Fortunately, the fish only made it a hundred feet or so before being scooped up in the net.
As I snapped the photo of Adam and his fish I couldn't help but laugh quietly. There was something boyish about Adam's grin. He looked like my son looks when he asks one of his sisters to pull his finger. He looked like my students look when they ply me with cleverly contrived excuses for unfinished homework. He looked as I imagine I must have looked the first time I ever touched a woman's breast.
He looked a little goofy.
And I suppose that's the charm of steelhead. Perhaps more than any other fish a bug chucker might chase, steelhead have a near preternatural ability to turn men into boys. In one moment we're husbands and fathers, teachers and tradesman, soldiers and veterans. In the next instant we're making fart jokes and burping the alphabet.
It's a wonder we catch anything at all.

*** More recent reports seem to contradict my own. True to form, we fished the river one day early. Both salmon and steelhead arrived in numbers the day after we visited Pulaski. ***

Email ThisBlogThis!Share to TwitterShare to FacebookShare to Pinterest
Labels: Douglaston Salmon Run, How About You Get Out Of My Way, Mudsharks Aren't Fit For Fertilizer, Running Rapids In A Douche Canoe, Salmon Stink Like Infected Twat

Brilliant (For My Deer Hunting Friends)

Email ThisBlogThis!Share to TwitterShare to FacebookShare to Pinterest
Labels: Bad Day To Be A Deer, Does This Work On People, Impressive, Pets Are Emergency Food

Email ThisBlogThis!Share to TwitterShare to FacebookShare to Pinterest
Labels: Don't Make Me Go Back In There, Glad I Am Not A Fish, Pike, Wishing I Was Fishing
Newer Posts Older Posts Home
Subscribe to: Posts (Atom)