The Naming of Things

Be warned that I write this as I approach the tale end of my second, two-pint bottle of Three Philosophers, one of the Ommegang brewery's fine craft-brewed ales. Tasty stuff ... much to my wife's chagrin. 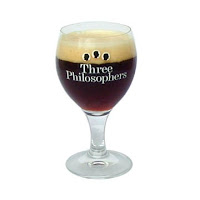 What is it about a fly shop? Seriously, what is it? We walk through the front door like young Charlie Bucket stepping into Willy Wonka's chocolate factory for the first time, all wide-eyed enthusiasm and wonder.  We're easy marks. Easily mystified. Easily impressed. Easily sold.

Looking at that list - through my rose colored beer goggles - I think I begin to better understand the marketing arm of the fly fishing industry. Clearly, tackle manufacturers and resellers have boiled down their customer base into several key demographics. Let's take a look at those constituencies.

The Disciples of Pythagoras: The Disciples try to bring order to fly fishing in the same way they try to order every aspect of their lives, through mathematics. For them, life's inconsistencies can always be reduced to their binary elements or a least common denominator. Every mystery may be solved, every challenge overcome, with a properly constructed algorithm. A brown trout rising sporadically to hendrickson spinners, permit tailing on a flat, a school of outsized carp cruising the shallows in a search of crayfish - these are all problems that may be solved with a little a2 + b2 = c2. Consequently, the Disciples gravitate toward gear that can easily be accounted for in an equation. Sage rods and reels are especially apropos: 99, One, 1200, 1600, 1800, 4800, ... 8675309. The numbers make sense.

Card Carrying Members of the Craig Sheffer Fan Club: What do you mean you don't know Craig Sheffer? Yes, you do. No ... really ... you do. Craig Sheffer is the actor that played Norman Maclean, the narrator and protagonist of the film adaptation of A River Runs Through It. But all you remember is Brad Pitt's performance? Hmmmmmm ... does your wife know you've been visiting Turkish bath houses?
The point - insofar as this semi-drunken rant has a point - is that Sheffer-ites are escapists. They fly fish to "get away from it all," and many were sold on the sport's more romantic notions by The Movie.  Consequently, Sheffer-ites gravitate toward gear that is marketed to folks with aesthetics and tradition in mind. Part of the irony, of course, is that most of this gear is made in mainland China where fly fishing is about as much a part of the landscape as is a Taco Bell drive-thru.

Irony aside, names like Battenkill, Classic, StreamDance, Drifter, Canyon, Clearwater, and Bighorn leave a Sheffer-ite dreaming wistfully of a time when anglers carried bamboo rods and wore felt hats with flies stuck in the brims. Through the magic of product branding, Sheffer-ites are removed from the cubicles and corporate headquarters in which they tend to congregate, and magically transported to Rocky Mountain freestoners with water pure enough to drink in the raw. Note that the Coors Brewing Company - a company whose products are never commingled with the words "tradition" or "aesthetic" - uses exactly the same marketing strategy to appeal to binge drinking frat boys whose fathers never took them camping.

Trekkies (sometimes referred to as Hobbits depending on the angler's proclivities):

Helios, Hard Alox, Vexsis, Hydros, Shadow, Mirage ... these are the names that writers of fiction give to ancient gods and distant star systems (and fly fishing marketers - or is it marketeers) give to their companies' latest and greatest gizmos. I can almost imagine a Las Vegas convention center filled to overflowing with pointy eared, wader wearing Spocks ... a Fly Fishing Show in which tyer's row is populated by the likes of Gandalf, Scotty, Bilbo, and Sulu - all of whom tie zonkers with trible fur and muddlers with flash from a barrow-wight.

Rapidly Aging Forty Year Old Men - Who Secretly Wish They Had Been Recruited for NASA, the CIA, FBI, or NSA:

Acronyms are everything. Everything.

That is why these men (and they're always men) often spend so much time and money pursuing university degrees. R.A.F.Y.O.M.s (Rapidly Aging Forty Year Old Men) need to feel accomplished.

They need to feel successful, and they need to feel that way because they are terrified of their own deaths ... or their daddies never hugged them ... or Santa Claus overlooked them ... or they've always felt sexually inadequate, or ... whatever. The bottom line is that they're afraid they'll leave this world having left no trace. In their perpetually pubescent minds they feel safe in the assumption that titles mean something, and the letters that follow their names on professional correspondence (FBI, MD, Phd, CIA, MSW, CPA et al) give them the sense of having accomplished something important, being noticed, or having huge ...

Sorry it's late, but I was too busy enjoying the weekend to bother with the blog. I hope all the dads out there - especially those who wade my small part of the piscatorial cyber funk - enjoyed the day as I did. Happy Father's Day all ...

Fully Guaranteed & Serviced by the Garcia Corporation. The warranty card has a little space to affix a quarter so as to cover the cost of return shipping. Can't help but love it. As best I can figure, this reel is roughly 1961 - 1965 vintage, and consequently older than I am. She's essentially new in the box. Not a scratch anywhere on it. Certainly never lined; likely never taken out of the box. Have to thank Ebay - and sellers who do not properly label the items they sell - for my new (old) Garcia (Young) Narrow Spool Beaudex. 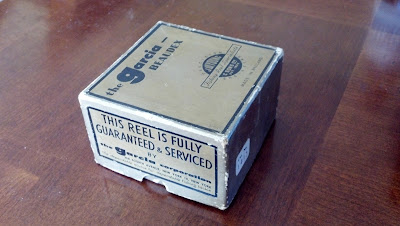 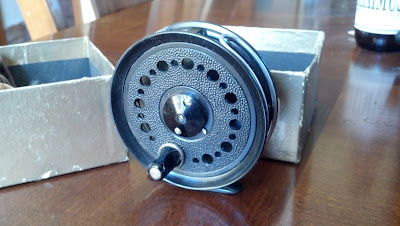 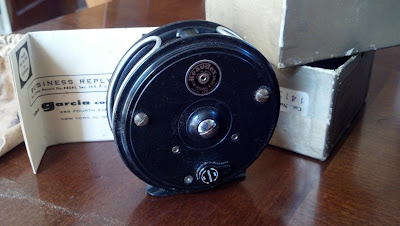 The discoloration you see in the photographs is simply dust from the inside of a forty year-old cardboard box.
Posted by BKill at 4:25 PM 2 comments:

*** Disclaimer ... All that follows is very personal in nature, and probably not worth your time. If you're looking for fishing photos, casting videos, or a fly tying how-to article then this post will not be for you. Go get your car's oil changed or yourself a piece of pie ... if I were you then cherry or apple would be my first choices, but I suppose Key-lime or chocolate cream would suffice. ***

I remember the first time I ever recognized the pride my father felt at witnessing one of my accomplishments. I was nineteen years old, and for much of my adolescent life I had been something of a prodigal son. Throughout high school I was a poor student, but not because I couldn't handle the work. Rather, I lacked focus and ambition, and like so many of my peers I was more concerned with girls than grades. I drank alcohol to excess, came home far past curfew most nights of the week, and even had a brush or two with the law. My parents tried, but the more they tried the less inclined was I to do the same.

Even twenty odd years after the fact, the reminiscence is tinged with regret. My mother and father deserved better, and I was too stubborn, too juvenile to understand a son's duty to his family. Fortunately, time has a way of healing the rifts between parents and their children, and I think this is especially true of fathers and their sons.

For my father and I, the process of reconciliation began one chilly November morning on the red-clay parade fields of Fort Benning, Georgia. On that day, I stopped being a delinquent child, and started being a man. On that cold November day, so many miles from home, my mother pinned a blue cord on the right shoulder of my uniform, a cord that signified my status as an infantry soldier in the United States Army. My father shook my hand, looked straight into my eyes, and told me that he was proud. I felt - both in the steel of his eyes and the stone of his grip - that he meant what he said. He was proud, truly and genuinely proud. 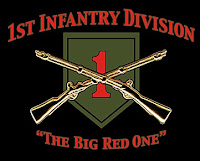 That moment was for me a rite of passage. My parents, my father in particular, saw me differently on that day. Even though my path was so often uncertain, on that day I managed to navigate my way out of the morass of my youth, and become the person Mom and Dad had known I could be and had so hoped I would be. After my service was fulfilled and I returned home, my father treated me not so much as his child but as his peer. We talked as men talk, and together we did the things that fathers and their grown sons do.

These memories were refreshed on a recent trip to the river as a friend and I drove along a country road that parallels the river's course. As we navigated its many twists and turns, we passed a young boy of maybe 10 or 12 years and a man that was almost certainly his father. The boy was seated behind the wheel of a well worn, emerald green John Deer lawn tractor. His father was explaining - quite vigorously explaining - the purpose behind each pedal, button and lever. Next to the tractor, seemingly discarded in favor of the larger piece of machinery, was a walk-behind push mower. To my eye, the scene had the appearance of a graduation. The boy had reached some sort of landscaping benchmark, and was being rewarded with the tractor and his father's guarded trust.

Accompanied by thoughts of the boy, his father, and memories of my own passage into manhood, I quickly settled into a cast-step rythym, flailing the water as best I could. Before long I was into a good fish, which I quickly played, photographed, and released. 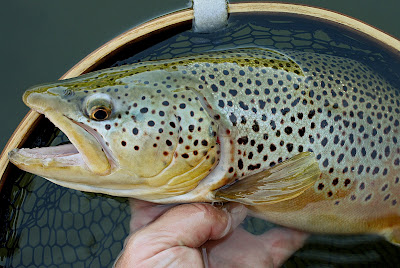 My eyes followed the brown as it swam off into the current, eventually losing itself amongst the cobble. I waded downstream a stretch, and spent the rest of the afternoon watching my friend - who had been learning to double-haul - cast to rising fish. I thought of the pain I endured while learning the same cast. I thought of the years I spent on the bends and twists of the river. I thought about that last fish, and I thought about my first fish. I thought about the milestones I've passed as an angler; milestones that have made me - at least as much as having been a soldier or a son - the person I am today. 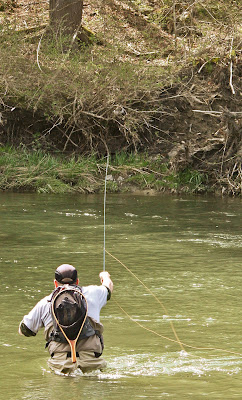 That is - perhaps more than anything else - what those folks who don't fish may never understand about those of us who do. The milestones we encounter as fishermen are sometimes as significant as any other we might experience in the various facets of our lives. Learning to cast and then learning to cast well, tying that first perfectly proportioned fly, hooking our first fish and landing the last: we learn something from each of these and myriad other moments. Not only do they make us better anglers, but oftentimes they makes us better people.

Yes ... the river is both instructive and redemptive. She teaches us patience, and the need to sometimes move more slowly. She teaches us to forgive ourselves of our failings, and to see past our partners' peccadilloes. She shows us triumph and disappointment alike - often in the same afternoon - and we learn to smile regardless. Perhaps more than anything else, the river teaches us hope. Hope for that next fish. Hope for a better day. Hope that we'll recognize the importance of the moment when the moment happens.

And it may just be that hope is the very best of things.
Posted by BKill at 1:02 PM 5 comments:

Today, the sun hides behind a grey mass of clouds, and the carp have their tails pointing skyward. Finally. A shot. 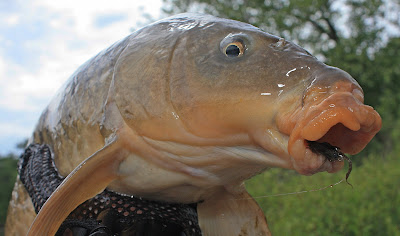 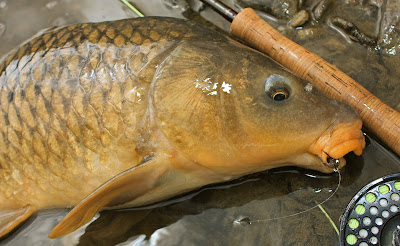 Not the biggest fish, but after a long drought - and an infuriating early season where other mud runners were catching them in March - it does feel good to be on the board. Now if we could only make the rain stop.
Posted by BKill at 4:27 PM 2 comments: