Pornography ... Courtesy of the River Gods

Not too long ago, the boys and I took three days to fish New York's, Salmon River. The trip was exceptional for many reasons, not the least of which was the fishing.

To say we did well might be a bit of an understatement. We caught more fish than the river gods had likely allotted us, but we worked hard to put them in the net. No two fish took the same fly. Some wanted eggs, others took nymphs, and a few slammed the hell out of half chicken skins, swung through the seams.

As with all things pornographic ... we begin with a bald man ...

Ruhan Neethling has made several appearances here on The Rusty Spinner. He's a world traveler, top notch bug chucker, and an artist whose skill at the vise approaches that of the most accomplished fly tyers. Since Ruhan and I began our correspondence, he has made several trips to New Zealand, and each time he has sent along some photographs for my perusal and enjoyment. It's hard not to be jealous, and just as easy to forget how bountiful our own, local rivers may sometimes be.

So, here we go again. Ruhan recently went back to Kiwi-land, and once again I have to ask that you raise your glasses to toast to my man on the other side of the globe. He's proof that fly fishing is universal in both its appeal and its madness.

FYI ... in the message that was included with the following photographs, Ruhan laments that this year's trip didn't witness any of the really big fish he saw during last year's trip. I couldn't help but laugh ...

Mustad to be Sold

After months of fevered speculation, the future of troubled Norwegian hook manufacturer Mustad looks to have finally been assured.

In a surprising twist to the long-running saga which has seen both Rapala and Pure Fishing linked to moves to acquire Mustad, Norwegian industrial and investment company, NLI Utvikling, has announced its intention to purchase the company.

The owner of NLI Utvikling, Borre Nordheim-Larsen, this week notified the Norwegian Competition Authority about the ‘possible acquisition of O.Mustad & Son AS’. He told it that some financial matters had yet to be settled, but that these were likely to be resolved in the next month after which a final decision on the acquisition will be made.

News of NLI Utvikling’s interest in Mustad has come as a shock to industry insiders as it was widely expected that one of the angling industry’s giants would eventually acquire the iconic hook brand.

Relatively unknown outside its homeland, NLI Utvikling, describes itself as a company that has a tradition in investing in companies in ‘demanding’ situations.

NLI Utvikling is a privately-owned and independent investment group with a strong tradition and deep roots in Norwegian industry. Since its inception in 1946, it has grown into an organisation that has nearly 1,300 employees and in 2011 had revenue of approximately 2.3 billion NOK.

It is said to invest in companies with potential for growth, but which find themselves in ‘demanding situations’.

Mustad seems to be an ideal fit for its growing portfolio as the company’s financial woes have been widely reported in the media. Speculation over its future heightened earlier this year when it closed its troubled Philippines operation – making around 200 employees redundant – and announced its decision to concentrate on its core business of hook manufacture.

NLI Utvikling currently has interests in the oil, gas, hydropower and renewable energy industries as well as the property and health sectors.

We should have known. When we pulled off the exit and the first flakes started to fall, we should have known. On this trip to the river - a November ritual that unites our small group of friends in the pursuit of piscatorial perfection - the river gods would be exacting their dues, but we were hopefully giddy and otherwise oblivious. We ignored the omens, and paid heed to no portents. We continued off the highway, and spent the next two and a half hours crawling along blizzard blackened back roads.

Day one had us crawling out of Brenda's bunk beds, bleary eyed, exhausted, and cursing our decision ever to pick up a fly rod. We fumbled through the process of donning our gear, slid into the car at 4:30 a.m., and were stumbling down the trail that leads to the river by 4:40. We set up our day camp and drank our first Jetboiled coffee more than an hour before sunup; we drank our first beer an hour after daylight.

Years had passed since I last fished the run, and she changed substantially in the time since our last dalliance. The roaring rapid at the head had been replaced by a gentle glide that slid into a long riffle. That heavy riffle then split into two distinct seams - steelhead would surely hold in either lie. The tailout was much the same as ever, aside from the three current breaks that divided the water into thirds; the confluence of these three eddies looked to be the perfect place to swing a fly. 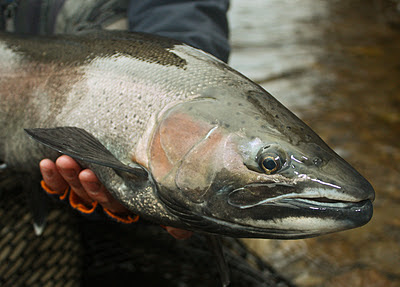 As is often the case on the Salmon River, we hooked up with hot fish shortly after first light. Ben was first to bring a steelhead to hand, and shortly after Shawn followed suit with a corker of his own. Both were good, solid fish that tore the hell out of the water, and reminded us of why we chase steelhead.

As for me ... well ... the river gods deigned that I was to pay penance for the group's continued success. I hooked fish that first day, quite a few fish by anyone's standard, but there's many a slip twixt a cup and the lip. The fish I hooked were slippery indeed. Each made a fool of me in short order.

What I felt after those steelhead came loose - either by throwing the hook or splitting my tippet - was akin to what a pugilist experiences when he's on the receiving end of a low blow. Nausea burned in my gut; my mind was a flood of frustration with my piscatorial impotence and anger at my deplorable luck. By the end of the day, I reeked of negative energy, and was ready to forever forgo November steelhead.

And after 12 hours in and out of the water on that first day, cast after fruitless cast, I finally hooked that one fish. When Ben slipped the net under his snout I was exhausted. My hands shook, my legs trembled, I was effectively snow-blind, but none of that mattered. I had a fish in the net. I could touch it. It was real, not a ghost.

Fly fishing - fly fishing for steelhead in particular - is a sport of small victories, and the hopeful anticipation that precedes those few, fleeting moments of triumph. Likewise, fly fishing for steelhead is a sport of frustration, irritation, vexation, and the particular anguish that accompanies complete and total defeat. Even the best amongst us know the bite of such defeat. It is these moments, however (times when we curse our fascination with water and with woods), that make sweeter those too few moments of victory.

Shawn Brillon is one of several talented product developers who work to bring the Orvis company's ever expanding line of fly fishing goods to market. Perhaps more to the point, he is among my closest friends. Like any man who is both a father and a fly fisherman, Shawn does what he can to impart his love of the sport to his boy. More often than not, this means that Shawn and Riley tool around the lake in Dad's drift boat, looking for midging trout or post spawn bass. At least once a year, however, Riley and his father make the trip to the Salmon River in hopes of finding some chromed up steelhead. This year R.J. showed his old man how to get the job done.