September on the Douglaston Salmon Run

Every September, my fellow bug chuckers and I make an annual pilgrimage to the Douglaston Salmon Run on New York's, Salmon River. Our hope is to wrestle an early season coho or king while not-so-secretly pining for steelhead and browns. The trip usually comes together in the first or second week of the month, but as fate would have it, only yesterday were we able to get our collective acts together. As expected, there was no shortage of fisherman, but an abundance of fish - fresh from Lake Ontario - made the trip worthwhile. 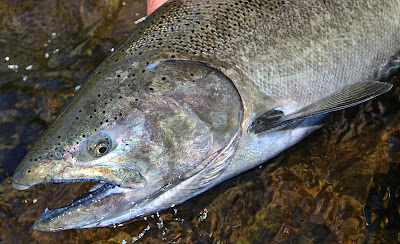 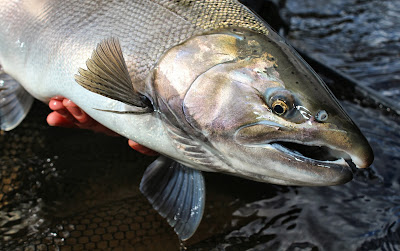 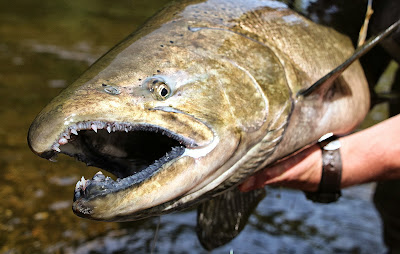 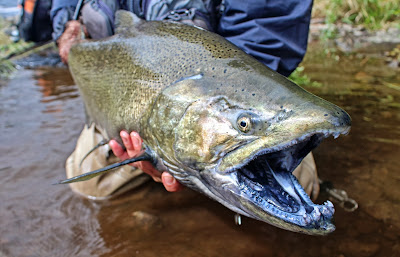 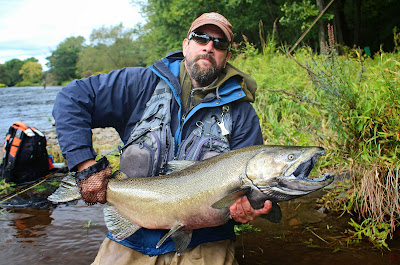 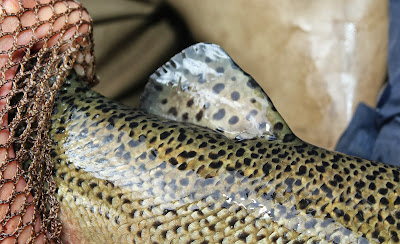 Fishing aside, the highlight of the trip was having the opportunity to meet Devin and his family. Devin was a young man (seventh grade) who had never caught a salmon; for the better part of the day, he and his parents were struggling to connect with fish. We were eventually able to get a fly rod in Devin's hands, and connected to that rod via line, leader, and gaudy fly was a coho of about ten pounds. Devin did an admirable job of listening to instruction and playing the fish; when that gleaming slab of silver was finally in the net I looked to the young man, and the expression on his face said all I needed to hear. We had done a good thing. Devin would sleep soundly that night, dreaming of silver salmon - his first salmon - and the pride in his parents' eyes.
Posted by BKill at 6:50 PM 3 comments:

The World Has Turned

After a long and particularly equatorial summer (read: hot and wet), the world has finally turned. I first noticed it the other night as the kids and I sat around the fire, and I watched as they practiced the nuances of properly roasting marshmallows. Their initial attempts back in July reminded me of that most famous of scenes in Apocalypse Now when napalm erupts along the tree line behind Robert Duvall's character, Lieutenant Colonel Kilgore. "I love the smell of napalm in the morning," Kilgore remarks, "that gasoline smell ... it smelled like ... victory." When set ablaze, marshmallows are remarkably napalm-like; they burn every bit as hot, stick to everything they touch, and even smell faintly of a sort of seasonal victory.

As the weeks have progressed since those first forays into the realms of sugar and soot, I've been seeing fewer fire hazards outside the confines of the stone brazier but exponentially more golden-brown caramelized goodness. The kids are finally getting it. When blowing out the amber flame that caressed one particularly well roasted marshmallow - perhaps his best offering to date - my son turned to me and said, "Dad, summer's over ... isn't it?" He looked a little crestfallen, and I nodded.

Yes, indeed. The summer is over, and as I sit here at my keyboard I find myself revisiting all the hopes I had for the season; aspirations that for myriad reasons - usually family, unfishable river conditions or indecisiveness - went otherwise unfulfilled. Foremost among my grand plans was musky. Going into the summer, I was determined to boat at least one of those snaggle-toothed apex predators. I did my research, and discovered that New York was surprisingly rich in flourishing muskellunge fisheries. I charted each river's course, marking on maps the likely put-ins and portage sites. I gave the wiggle test to several 10 weights, and tied a slew of outsized flies. And then - in the most anti-climatic way possible - it just didn't happen. Work got in the way. Family got in the way. Weather got in the way. Life got in the way. Maybe next year (of course, it doesn't help my fragile angler ego any that near the end of August one of my friends managed his first musky ... on a trip I was invited to attend).

This was also going to be the summer that witnessed me catch over 100 carp in the months of July and August. Again, I failed, but I think my inability to catch so many fish owes more to the nature of carp fishing than it does to any distractions. It was nothing short of hubris to believe that in roughly sixty days I would sting so many. Even if I was on the water everyday and everyday the water was perfect for sight fishing - hindsight suggests that such a high figure is a little ridiculous. Carp are far too difficult to stalk, and honestly I just don't have that kind of mojo. I caught enough fish to keep me happy, but I've learned not to project my foolish expectations onto such an unpredictable and uncannily wary animal. 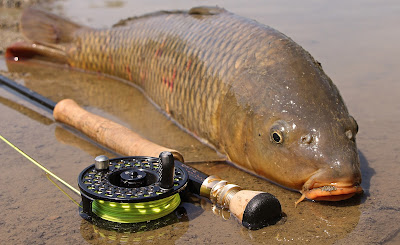 Of course, I was supposed to explore new water - places that for now will have to remain distant and aloof. The ghosts that swim the phantom currents of those rivers will remain safe from the sharpened reckoning of my fly boxes for at least another year.

And while I am sad to see another summer come and go, I have to say that I am genuinely looking forward to the change. I find I'm filled with the hopeful anticipation that only autumn can bring; my dreams are filled with oranges and reds, chromatic silvers and buttery yellows. Bass, carp, and even muskellunge have given way to kings and coho, brown trout and steelhead. Reports suggest that the salmon have begun their annual push, and the trout will shortly follow to gorge on eggs and flesh.

So if I've a lesson for my boy I suppose that it is this: do not mourn the summer. Instead son, be patient and remain hopeful. The summer has indeed passed, but there are still new places to explore. There are still fish to catch. At the change of the season there is always a silver dream to chase.

Email ThisBlogThis!Share to TwitterShare to FacebookShare to Pinterest
Labels: Brown Trout, Campfires, Carp, Marshmallows, Musky, Napalm in the Morning, Steelhead, Yo Ho Ho, You Can Fight or You Can Surf
Newer Posts Older Posts Home
Subscribe to: Posts (Atom)