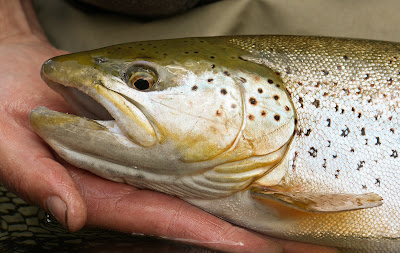 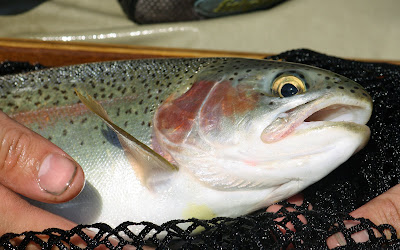 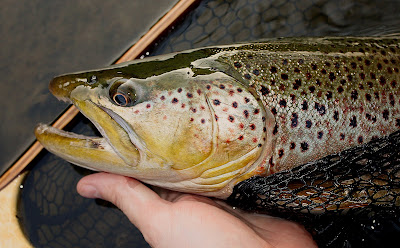 Found this on another blog I follow, it seems genuine, and I thought I would pass it along to those few folks who follow The Rusty Spinner. Flourocarbon tippet material is pretty expensive stuff, so if someone wants to give you some for free then you should probably take the offer. Fill out the form, and the company promises that the spool is mailed post haste. 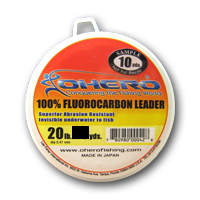 You'll have to forgive me as I simply haven't much to say. It's been a busy week; family, friends, and fish have positively devoured my time. For now, photographs from our most recent outing will have to suffice. 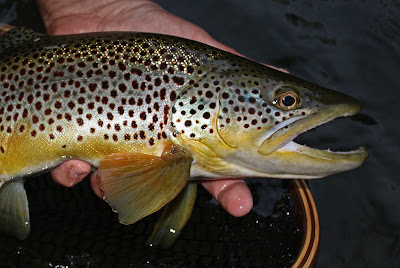 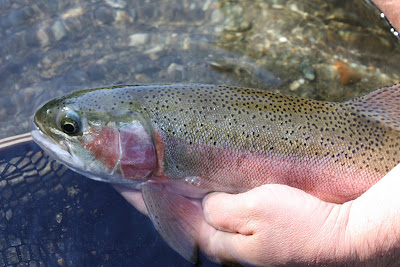 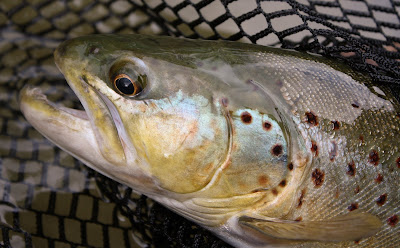 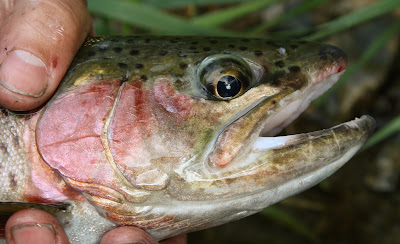 Rock snot -- proper name: Didymosphenia geminate, or didymo for short -- is non-native algae that grows on the rocks at the bottom of a stream. It creates a slick surface for fishermen. Worse, it keeps native algae from growing and threatens the base of the food web. While it will not cause widespread harm to the trout population immediately, it will reduce their numbers over time.

"Rock snot is a pernicious invasive," said Blue Neils, a trout fisherman and vice president of the Friends of the Kayaderosseras. "There is no known control for it."

A Skidmore College professor and her students found rock snot in the creek where it flows through the hamlet of Middle Grove and reported it to the state Department of Environmental Conservation. Staff from DEC checked four sites along the stream and found rock snot thriving in two places. The streambed surface at the fishing access point off Creek Road was 80 percent covered with up to a half-inch of the slime.

The streambed near a pull off at the intersection of Creek Road and Middle Grove Road was 90 percent covered up to 2 inches thick on some surfaces.

Neils said he was disappointed to hear the news but also felt it seemed inevitable.

According to David Winchell of DEC, didymo was historically limited to cold, nutrient-poor northern waters but in recent decades has spread to warmer, more productive rivers and creeks. It was discovered for the first time in New York in the Batten Kill (Washington County) in 2007. It has also been found in the east and west branches of the Delaware River and Esopus Creek.

As with other invasive, nuisance species like Zebra mussels and Eurasian milfoil, vigilance is the key to containing rock snot.

Microscopic alga cling unseen to waders, boots, boats, paddles, clothing and fishing gear. Even dry rock snot is still dangerous because once wet, it can spread into a new water source. Cleaning rock snot off of equipment is necessary to keep it from invading new territory, but it is no easy task. Winchell recommends soaking and scrubbing everything in hot (140-degree) water, 2 percent bleach solution, 5 percent salt solution, antiseptic hand cleaner or dish soap for at least a minute.

The felt bottoms of wading boots are the trickiest of all to thoroughly clean.

Leigh Hornbeck can be reached at 454-5352 or by e-mail at lhornbeck@timesunion.com.

Read more: http://www.timesunion.com/AspStories/story.asp?storyID=930520#ixzz0nu7lVjtD
Posted by BKill at 9:18 AM No comments:

You Can't Always Get What You Want

Like so many fishing stories, this is a tale of the one that got away.

One week ago, I caught an enormous brown trout. Of course, "enormous" is a relative term. The fish was about 24" long, and likely weighed ... well, God only knows what it weighed. It was fine fish though - a big fish - insofar as the river goes. Long, thick in the middle, a protruding kype and well defined shoulders. This kind of brown trout will certainly make an angler's day, may be the highlight of his or her season, and might end up the crowning achievement of a lifetime spent riverside.

Are there bigger? Does the river hold eight, ten, or twelve pound fish? Of course, but trout like those are legendary in part because they're so rare. They're phantoms - figments of our imaginations that are there and gone before we've a chance to set the hook. When they are caught, it is almost always by a ten year-old boy fishing nightcrawlers below a red and white bobber, or a 75 year-old farmer slinging salted minnows with an equally aged Heddon baitcaster. Fly flingers sometimes pay thousands of dollars, and travel half way around the world for that kind of luck.

In my years on the river, I've had the good fortune to hook several fish of that caliber, but I've been denied the opportunity to hold even one behemoth in my hands. Such is my luck, and please believe me when I tell you that the reminiscence is bitter.

I remember how I shook after fighting a rainbow that was likely 28 to 30 inches long. She leapt from the water five or six times like an angel bright steelhead fresh from the Pacific. The trout pulled me into my backing, and didn't end the battle by breaking my line, but rather by breaking the hook - a stout #4 TMC 9395. I also remember my shock as a similarly sized brown tore off 60 feet of line, and threw the hook in a violent roll on the surface. His eye was as big as a nickel, and I swear he winked at me before we parted ways. The following week, what I can only assume was the same fish broke me off on a streamer. There was that brown that tailwalked for three or four feet before spitting my Muddler back into my chest, and still another that bent two hooks straight on two separate occasions. Life - or the life of this particular bug chucker anyway - is full of disappointment.

And I experienced another such disappointment just three nights ago. Adam, Ben and I were fishing a stretch of river that has given up some real bruisers over the past two years. This particular spot has everything an outsized brown could want or need: depth and depth changes, cover, plenty of feed, relatively gentle current, and virtually no fishing pressure. In my years of fishing there, I've never seen any footprints in the sand other than  my own. It's a glorious place to spend an evening.

It's especially glorious if you've devoted yourself to the kind of trout that break an angler's heart. I'll spare you the long version, but we fished through the run with every streamer in our boxes. Cast, step, cast, step, cast, step, back to the head. We were getting a little bit frustrated as we hadn't had so much as a bump all day, and our arms were sore from repetition. The six pack of Saranac Pale Ale may have been the only thing, which kept kept us from going all Lord of the Flies on each other. On my last pass through the run I tapered my leader down to 4x, and rigged up with a pair of nymphs. The fish took on what must have been the first or second drift.

Twice I had him nearly close enough to net. He may as well have been a mile away for all the good it did.

I swear he winked at me before we parted ways.
Posted by BKill at 10:45 PM 2 comments:

Those of you who know me, know that I'm a dedicated fan of the original Orvis CFO. I collect what my wallet allows, and I fish the reels in my collection whenever the opportunity presents itself. Over the course of the past several years, I've compiled a time-line or history of the reel dating back to its premier in 1972. With the help ff Yoshi Akiyama of the American Museum of Fly Fishing in Manchester, Vermont, I'm able to bring you the following pictures. This is the original Orvis CFO as designed and made by Stan Bogdan, a machinist and recently retired maker of truly exceptional salmon and trout reels. I'll soon add these photos to my history, but for now ... here is the original Orvis CFO ... 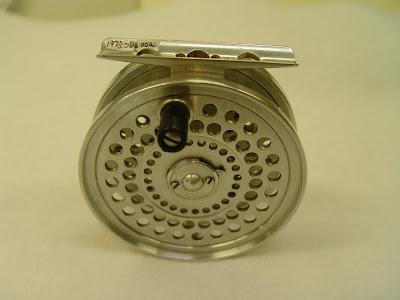 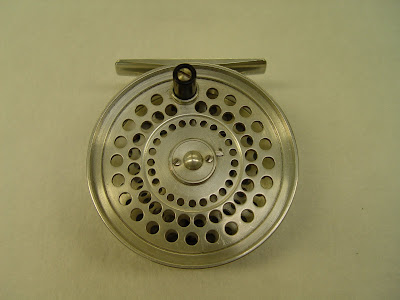 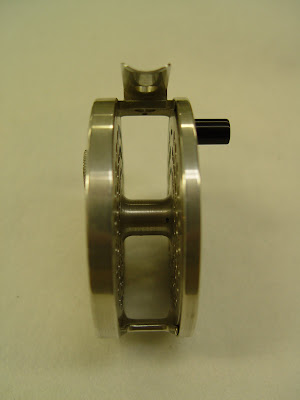 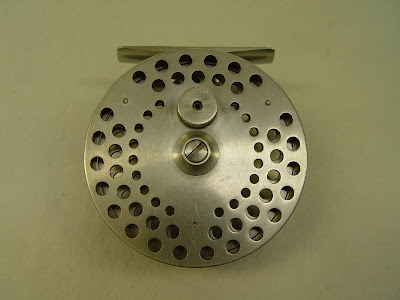 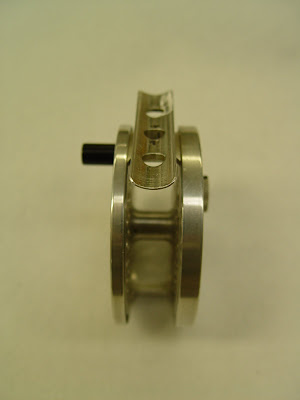 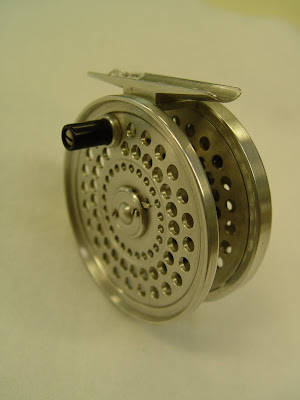 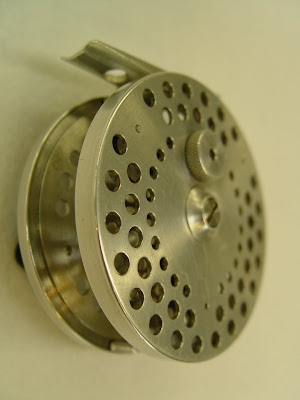 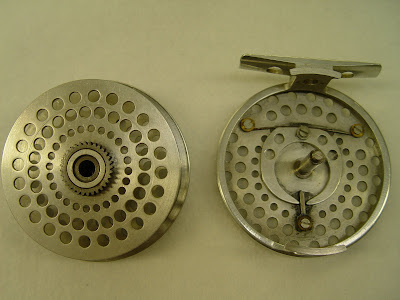 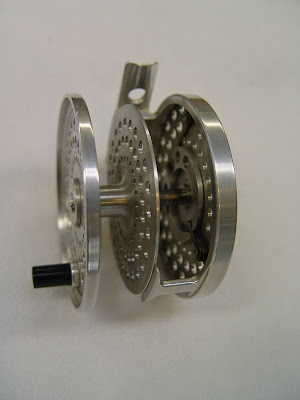 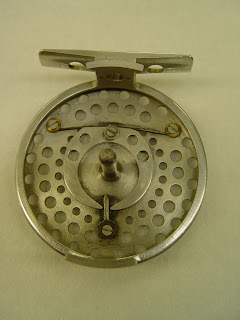 No - really - it does. Fishing sucks.

Most days on the water are mediocre at best, and some days are downright brutal. Cast after cast, drift after drift pass by both uneventfully and unrewarded.  We make the two hour drive to our favorite section of the river, only to find it seemingly devoid of life. We're greeted by dozens of porpoising behemoths only to have our best offerings refused. We forget the beer. We fall in.

We're humiliated by animals that are several million years behind us on the evolutionary time line.

The jury is out. Fishing sucks.

And just when all your rods and reels seem destined for Ebay - just when you start to think of taking up golf, badminton, buzkashi or jai alai - you catch fish like these ... 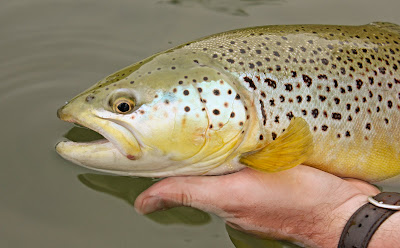 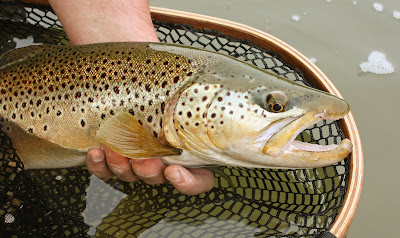 God, I love the suck.