A short video of Robin Hill (of Spey Nation fame) catching his first mirror carp. I've interspersed the video clips with some pictures of common carp - only because Robin's fish spirited itself away before I could snap a few photos. More than anything, this was a chance for me to play with a new video camera and editing software so please bear with my amateurish efforts.

The TOW missile has been one of the U.S. military's standard anti-tank weapons since first being introduced in the late 1960s. When I was a soldier (many years and several pant sizes ago) TOWs were just about the biggest and baddest piece of ordinance that an average grunt like myself was ever trusted to handle. It's probably a good thing too because I was foolish in all the ways young men are often foolish, and I really enjoyed making things go "Boom!" - perhaps a bit too much.

TOW is an acronym for "Tube launched, Optically tracked, Wire guided." As the name implies, TOWs are tethered to their firing tubes and guidance apparatus via a ridiculously thin and strong wire that spools out for a maximum distance of 3750 meters. Think about how many pheasant tails a bug chucker could tie with that much wire. Assume the average tyer uses three inches of wire per fly, and understand that one meter equals just over 39 inches. That means one meter gets us roughly 13 flies.  Multiply 13 by 3750 and we discover that one TOW fired to its maximum range will give us a yield of 48750 pheasant tails.

Anyway ... I remember wanting a memento of the first TOW missile I ever fired (on a live fire range in the California desert). Unfortunately, once a round is expended, little remains but the aforementioned wire - draped across the landscape from launcher to smouldering target. With no other option, I did what any fly-tying infantry soldier would do, and I scooped up as much of Uncle Sam's wire as I could retrieve and fit into the cargo pockets of my uniform. For half a decade, the First Infantry Division and the Raytheon company provided the ribbing for nearly every nymph I tied.

All of this brings us to Sergeant Shaun Gruner, a fly tyer and Army veteran who is a little more creative than was I in applying military surplus to his piscatorial pursuits.

Shaun began his military career many years after mine had ended. He went through basic training at Fort Benning, Georgia in 2007, and first deployed to Afghanistan in January of 2009. Gruner survived that deployment and another in 2010, only to be felled by a golf-ball sized rock while on a run along the dusty roads of Fort Bliss, Texas. Torn ligaments in his right foot prevented Sergeant Gruner from continuing to serve, and in January of this year he was given a medical retirement from the Army. He and his wife have now settled in Arizona.

As is the case with so many bug chuckers, Sergeant Gruner began fishing as a young boy but didn't pick up a fly rod until later in life. Gruner's first trout on a fly was hooked entirely by accident (incidentally, most of the trout I've caught in 30 years of fly fishing have been hooked accidentally). That first fish took Gruner's bug when Shaun dropped his backcast a little too low, and the trout found the sergeant's misplaced fly too good to ignore.

After a long hiatus, Sergeant Gruner now hopes to return to fishing with the long rod. He has started (or rather re-started) tying his own flies, but lacks a collection of that materials that many of us consider essential. True to his military training, however, Shaun has adapted to the situation. He ties a grasshopper pattern that uses materials taken from items that are common to any soldier serving at any post in the world.

Shaun first shared this fly with the world via the Project Healing Waters Facebook page, and he has graciously agreed to do likewise here on The Rusty Spinner.

The river is beginning to drop, but it will take another week of rain-free weather before she begins to clear. Regardless, I was out looking for tails today, and I almost stepped on this guy - having mistaken him for a rock. I would guess nearly 30 inches from tip of snout to tip of tail ... one of the biggest I've seen locally. 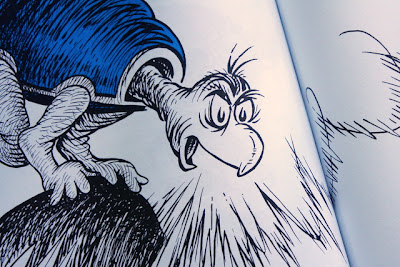 What Do You Get When You Mix Vinegar and Warm Water?

I received that text message at 11:31 in the morning, and by noon I was helping Robin to spot tailing fish as they rooted in the mud. 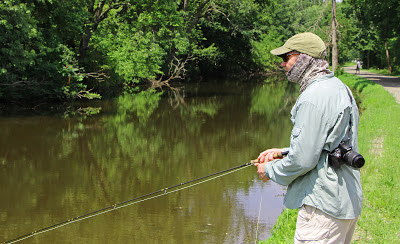 The fish were there, but they were skittish - even more so than usual. We managed only one smallish carp to hand, and that one fish was either very dumb or desperately hungry.

Before long we had visitors, which isn't entirely unexpected when fishing so close to town. Normally, I try to be cordial when I meet someone riverside. Yes ... there's always that part of me that wishes I had the water to myself, but I've learned my world is a happier place if I lock that feeling away in the darker recesses of my brain. Call me Buddha. Anyway ...

There was something about this fella' I couldn't quite put my finger on, and then all at once it hit me. He was bowfishing ... and he decided he needed to kill the same fish we were targeting.


I have to say it was a first for me. I've been low-holed dozens of times on any number of rivers, but I have never been low-holed by a bowfisherman. I couldn't help but stare in wild-eyed wonder.

Douche.
Posted by BKill at 8:14 AM No comments: