Not much to say really ... a good organization doing good - and necessary - work.

Day 117 of the Snowpocalypse witnessed me trudging across the wintry landscape (80 degrees just two days ago and five inches of frozen misery in my driveway this morning) looking for those trout that might have sense enough to abandon the main river's swollen currents and run into its less torrential tributaries. Two hours into my foray I realized my error: trout haven't any sense. Neither have I ... apparently. I should have stayed home and watched re-runs of Murder She Wrote on the Hallmark channel.

But I didn't stay home. I went fishing.

So what do we angling optimists do when the river gods hand us a basket full of lemons? We wander aimlessly through the woods looking for something, anything that might help us repair our fragile male egos.

I didn't find anything like that - no bikini clad Scandinavians whose Jeep was stuck in the mud - but I did find a woodchuck.

The groundhog was working rather assiduously on widening what I assume to be one of the entrances to his burrow. He disappeared as I approached, but on a hunch I set up my camera to record the door to his man-cave, and I wandered off long enough to let him get into trouble.

This is what I found when I returned (I don't think he quite knew what to make of the DSLR looming over him so oppressively) ...

Email ThisBlogThis!Share to TwitterShare to FacebookShare to Pinterest
Labels: Daddy Can We Look Up Groundhogs, Daddy I'm Bored, Every Groundhog Will Have His Day, Where The Hell Are The Trout, Woodchucking My Ass Off

Here in New York, the opening day of trout season comes on the first of April. For many Empire State bug-chuckers, opening day signifies the end of a frozen season and relief from a particularly nasty strain of the shack-nasties. My life (read: my wife) required me to be elsewhere on opening day, but that didn't stop a close friend and fishing buddy (read: a real son-of-a-bitch) from doing his best to make me jealous via text messages and email.
For five days I stewed over those messages. When finally I found myself stream side (read: my wife granted me a 1/2 day pass) the season had been open for nearly a week, and even the smallest streams were spilling their banks. I gave it a sincere effort, but the fish - no doubt too busy dodging rolling boulders and avoiding falling trees - did not cooperate. Most of the day I walked the woods with a camera in hand.

And in the course of my wandering I found something very interesting; something I've somehow missed in twenty years of strolling through that little patch of woods. 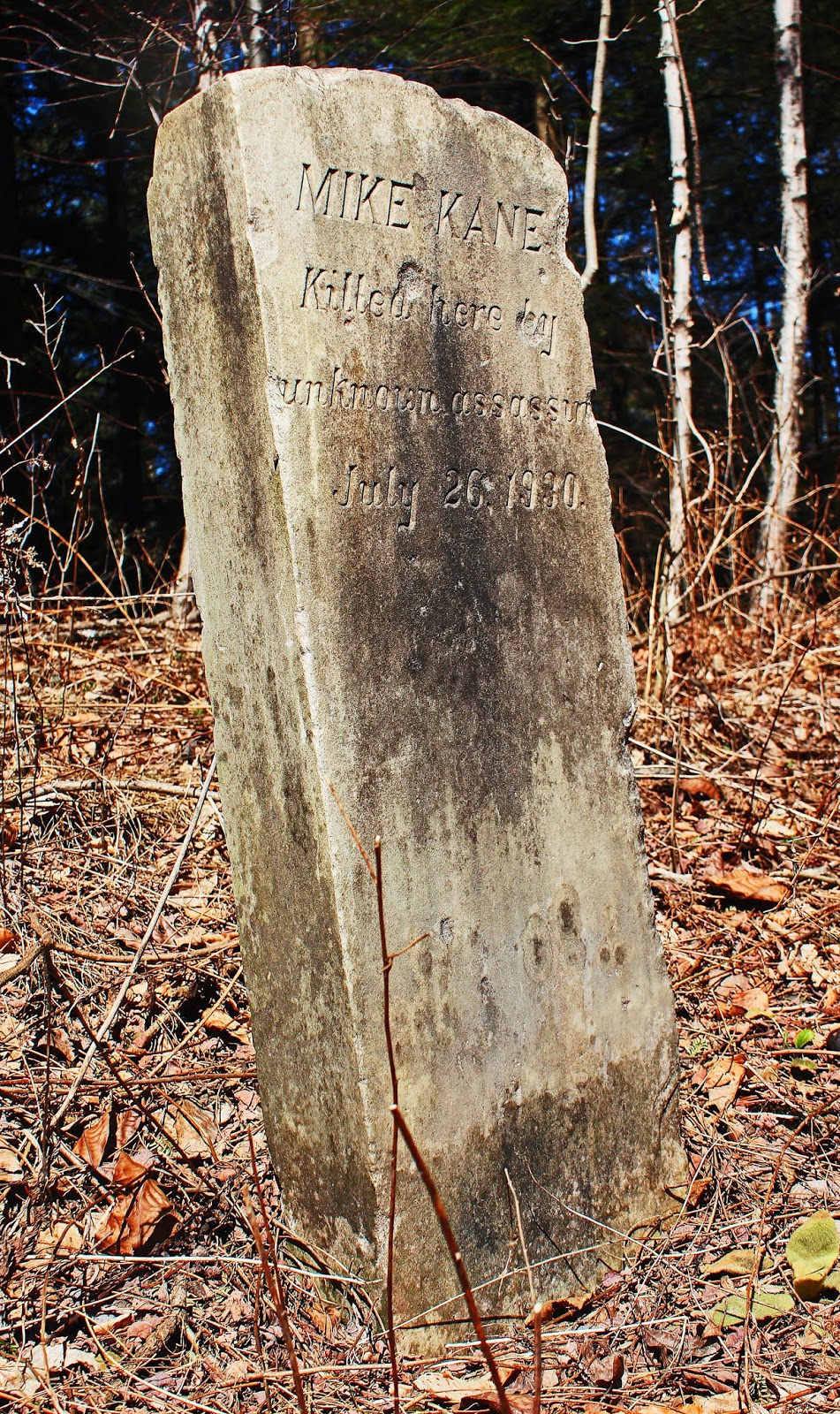 The inscription reads, "MIKE KANE / Killed here by / unknown assassins / July 26, 1930." I find it difficult to imagine that for twenty years I've walked those river banks in the shadow of a murder. A little digging on the Google machine revealed that Kane's killers were eventually caught - six years after his body was discovered in that spot by the stream.

Several years ago, I came across another interesting piece of history only a quarter-mile from the site of Kane's assassination. My best guess is that it was the foundation of a home or perhaps a root cellar. Whatever it was, all that remains are four walls of stacked stone. With the exception of some moss and a few trees growing up through the center, I imagine those walls today look much as they did a hundred or more years ago. 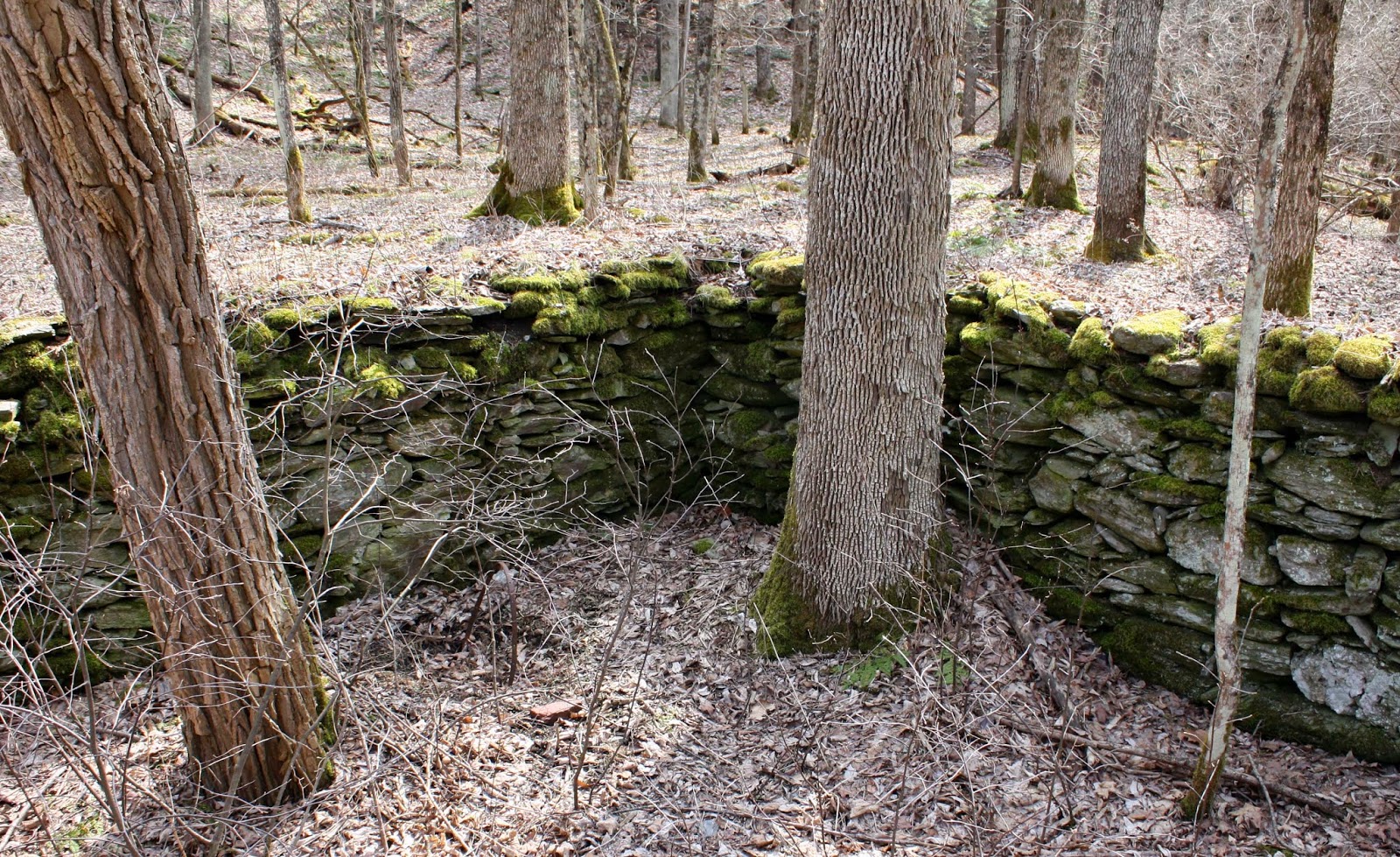 When I think of all the history tucked quietly into that little valley I find myself wondering what I've likely missed. Too often, I don't look away from the water. Too often, I don't take the time necessary to explore the river's history or to appreciate my part in that story. Maybe when I next go fishing I'll do a little more than just go fishing. Maybe I'll go for a walk, or maybe I'll just sit on the bank and think. Maybe I'll discover some of the river's history, or if I am very lucky, maybe I'll make some history of my own.
Posted by BKill at 11:01 PM No comments: