Contour lines moved ever closer; blue lines faded to dotted blue lines and then disappeared altogether. We were off the map. In a strictly technical sense, we could have used a compass to shoot an azimuth, estimate our distance to two nearby hilltops, and then pinpointed our location on the grid, but insofar as bug chucking goes we were most definitely in the land of the lost. According to our map - a USGS topographical survey circa 1984 - the stream we were fishing disappeared into the bedrock at least three quarters of a mile farther downstream, yet there we were - knee deep in a spring fed bog that reeked of decomposition and sulphur, a swamp from which a small brook emerged that we erroneously thought might hold a brookie or two. We finished the day exhausted, with nothing more than mud splattered clothing and a torn pair of waders to show for our substantial effort. 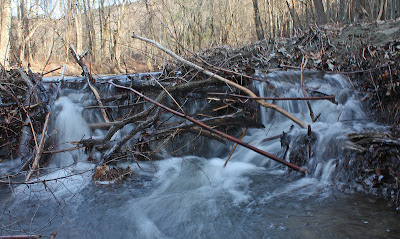 Of course, in several decades of fishing together Adam and I have managed any number of trips that were every bit as successful as the aforementioned was disappointing.

"One upstream, one down?"

I worked slowly and methodically downstream through riffles and pocket water, both to be thorough and to avoid the dunking that had become almost standard on our exploratory missions. I remember that my first impression of the stream was that it was barren, probably ravaged by acid rain, and likely devoid of any fish worth chasing. In less than twenty minutes, however, Adam came bounding downstream - sprinting through the water and leaping from rock to rock like that gnu featured in the opening theme of Mutual of Omaha's Wild Kingdom.

Only twenty minutes since we had parted ways, and already he appeared disheveled. His breathing was raspy and came in labored gasps. Rod and vest were missing, presumably left streamside; carried gingerly in both hands was his net - as a Greek priestess might have presented an offering to her goddess.

If Adam said much else then I didn't hear him. I was staring - wide eyed, stunned, almost certainly with my mouth agape - into his net. Struggling against the moist cotton mesh was an outsized brown trout that seemed much too big for such an inconsequential little brook. Shocked as I was, all the usual superlatives and vernacular abandoned me. 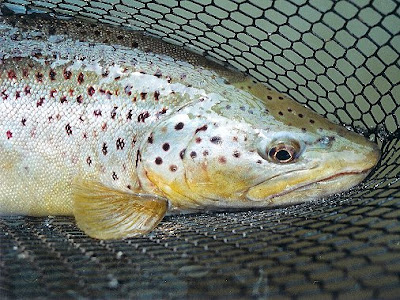 Adam beamed and enjoyed the moment. The fish was impressive in all the ways that mattered: thick and heavy, unmarred and unblemished, beautifully spotted and caught in a pool that likely hadn't seen another angler in decades if at all. Adam and I first found that stream (as we did most good things in those days) on a map, and in the twenty odd years since that first trip to its banks we've only ever shared its location with our most trusted friends and family.

As I reflect, I realize that my angling life has delivered many such moments of discovery: mud flats loaded with carp, gentle glides that are blanketed with hendricksons each spring, bass and bream by the bushel, even a nameless Montana spring creek that only locals fish and then only rarely. I've been very fortunate, but fortune only takes a bug chucker just so far. We cannot count on our good luck to see us through those too few seasons that we're given. Instead, we must be diligent experimenters and explorers who demonstrate a willingness to go off the beaten path, to travel outside the confines of our little piscatorial box. We need to take risks because it is risk that gives us the right to keep or to divulge the secrets we've learned.

I must admit that I've become complacent. I've been satisfied, sated, and perfectly happy to rest on my laurels. I've stopped experimenting at the vise, and my maps - all of them so well worn and creased - have either been discarded or forgotten on a shelf. As I look forward to the remainder of the year and the opportunities it will bring I make myself a promise. I'm going to travel outside of my comfort zone. I'm going to visit new water, and try to see old water with fresh eyes. For every dozen, proven flies I tie - I am going to tie one experiment, one Franken-Fly, and I will fish that fly at the first opportunity. I will find my way out of the bug chucking rut in which I seem to be mired. I will learn something new, and once again - I will earn my secrets.

Email ThisBlogThis!Share to TwitterShare to FacebookShare to Pinterest
Labels: Brookies, Brown Trout, Down and Dirty in the Mud, Read the Map, Secret, Secret Sharer, Swamp, Try Something New

How Cold Was It?

On our way to the river we passed a filling station that had an LED thermometer out front ... 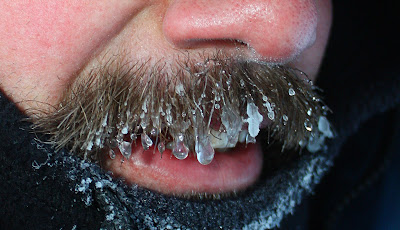 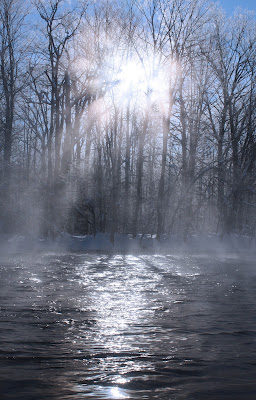 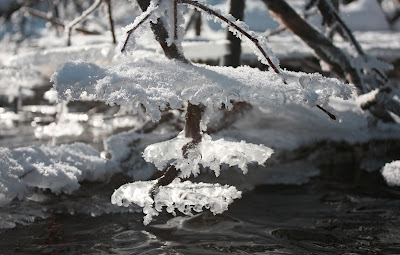 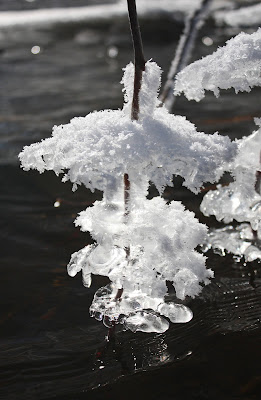 Which I suppose makes us a special kind of crazy ... 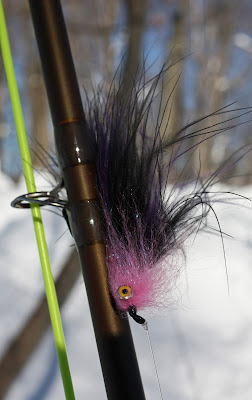 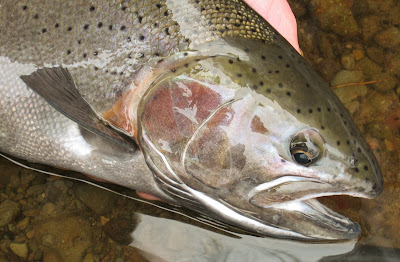 Thinking about fishing seasons past - and about changing the look of the blog - so I thought I'd share the fish and photos that inspired and eventually became the current Rusty Spinner banner ...


As much as I enjoy steelhead, I can't help but think that the hendricksons will be back soon.
Posted by BKill at 12:23 PM 2 comments:

My wife tells me that I am obsessed with fishing. I suppose she's right; she usually is when shining a light on any of my many peccadilloes. And one need look no further than this blog for proof of my obsession, but to say I am obsessed is really only half the truth. While I am always thinking of fishing - the fly, cast, hook set, and the ensuing ballet - I am also compelled to get out there and do the deed. I need to fish. 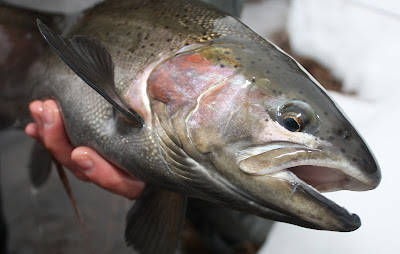 Thinking, talking, or writing about fishing neither satisfies nor sustains me. I need to step into the water and wet a line. I relish that moment when I lay out a cast a little farther than I'm usually able, turn over the leader as leaders were meant to turn over, and place the fly just about where I hoped to place the fly. I need to be there in that the moment when a blackened and scarred snout emerges from the grey green depth. Even thinking about it now, I can feel my heart skip as I wait for that imagined fish to inhale my diminutive and poorly tied hendrickson. I need that moment as I need the love of my family, and could no more abandon the water I fish than I could forgo the water I drink. Fishing nourishes me every bit as much. 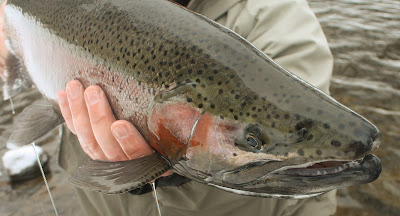 Enter the sting of a new year's weather and an`annual winter-run of steelhead. If not for steelhead, January, February and March would mark a barren, dreadful season. Steelhead save us - the afflicted - from ourselves. Steelhead give us hope at a time when many other anglers can do little else but pine for warmer days and open water. 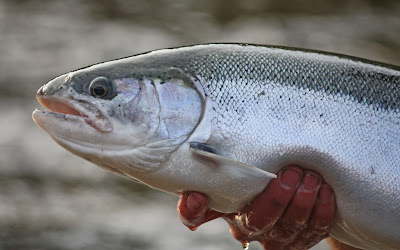 To my way of thinking, there are few game fish that are quite as game as a fresh chromer, even when water temps approach freezing. Few animals are quite so fast, and fewer still as unpredictable. When a steelhead enters the river she is hell bent on procreation. When she is hooked, every ounce of that preternatural, adrenaline fired sex drive pushes her toward escape. The takes are sometimes very soft, a series of gentle, almost imperceptible taps. More often, however, a steelhead will attack the fly with absolute abandon - be that fly a #8 beaded stone or a #2 Purple Peril. 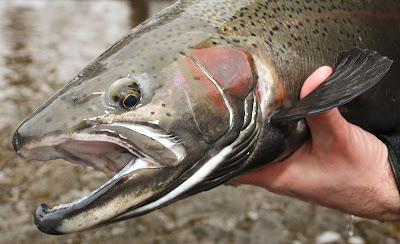 And what won't we do to satisfy that January jones, to get that mid-winter piscatorial fix? In my little corner of of the world, the closest steelhead are Salmon River fish - two and a half hours away. On average, we make the trip some three to five times a month. That's two hundred ninety miles and five hours per round trip. Two hundred ninety miles and five hours of sore backs and heavy eyelids, bad weather and snow slick roads. Most days, it's a suicide run to get from here to there and back again. To some small degree, we're taking our lives in our hands every time we make the trip. 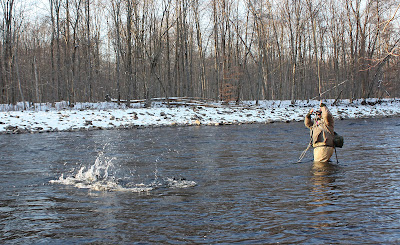 "Is it worth it," my wife asks. "Is it really necessary to drive all that way for a fish?"

I smile at the question, kiss her cheek, and slough off into the living room to play with the kids. She doesn't understand, but in her defense - few people do. We don't make the trip for a fish.

Few things could be better, and fewer still are quite as necessary.

"When I was a little boy every little squirt wanted to be a harpooner or a sword fisherman." - Quint, Jaws (1975)


While chasing steelhead on the Salmon River, this river chicken paid me a visit to show me how the locals get things done. For the first time in years, I had a video camera in my pocket when a video-worthy moment presented itself.
Posted by BKill at 11:17 PM 2 comments: