What is one to do when one's brother in law (soon to return to his home in Inverness, Scotland) over-inflates one's pontoon boat, resulting in 60 inches of blown out, ripped seam along the inside edge of one of the toons? Well ... one does what any self respecting, red blooded, American male would do. Duct-tape the holy hell out of the offending pontoon, pump up that biznatch to near capacity, and soldier on.

You Find the Damndest Things

What is it about rivers that makes them magnets for trash?

I have fished the same two or three ditches every year for twenty odd years, and every season brings with it a fresh parade of yesterday's leftovers. Seriously ... what is it about the nature of running water that leads people to think, "Yeah. This looks like a good place to get rid of my old stove ... that dead car battery ... this bag of trash ... those canisters of used motor oil." Really? REALLY?

I suppose the more appropriate question might be, "What is it about people?" It's a simple enough question. What is it about people that allows them to think that once their refuse is carried away by running water, the problem disappears entirely and forever. The stuff inevitably ends up in someone's backyard, and one person's trash is not always another person's treasure.

Just in case you're the only bug chucker left who still needs convincing ...

Same river. Same feeding lie behind the same rock. Same fish. If you're a doubter, compare the spot pattern underneath the eye and along the gill plate. This is why we let them go ...

I started The Rusty Spinner with the intent of writing for the sake of writing, and to have an outlet where I could talk fishing without boring anyone or making a general nuisance of myself. One of the unexpected, ancillary benefits has been that I've met any number of like minded (read: similarly obsessed) bug chuckers. Most are local, and tread the same rivers I often wade. Some hail from the far ends of the globe.

One of the far flung followers of The Rusty Spinner makes his home in Papua New Guinea. I correspond with Ruhan Neethling from time to time; occasionally he'll email me with photographs of his latest piscatorial adventure. Most recently, he sent me a collection of photos that document some of the time he has spent in New Zealand. I'd be lying if I said I wasn't a little bit jealous.

Having perused these photos - and having mentally superimposed my own image into each snapshot - I now feel obligated to share them with my readers. I've no doubt you'll find yourself daydreaming just a little bit, and wishing that this was the year you were finally able to make that trip about which you've always dreamed.

﻿﻿﻿
﻿﻿﻿﻿﻿﻿
﻿﻿﻿﻿
﻿﻿
﻿
What really impresses me - even more so than the trophies he has to his name - is the depth of Ruhan's talent. Clearly, he's a competent angler, but Ruhan is also an exceptional tyer, at least as comfortable at the vise as he is on the river. His free form Atlantic salmon flies are worthy of framing. 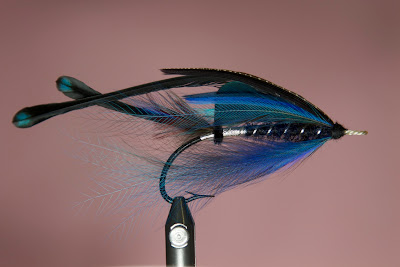 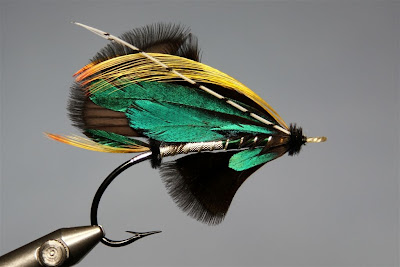 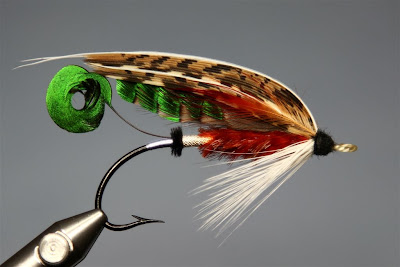 There is a clear path to happiness for the average bug chucker.  There are variations on the theme, but ultimately the song remains the same.

Not long ago, I had the good fortune to meet fellow bug-chucking blogger, Robin Hill. Robin is one of the duo of writers responsible for The Angler's Net, and he is intimately involved in an annual gathering of spey-heads known as Spey Nation. We spent an evening fishing one of our favorite pools on one of our favorite rivers, and waiting for a spinner fall that never materialized. So it goes.

My first impression of Robin is that he is a thoroughly competent angler; he ties a tight fly and throws a tight loop. He neither brags, nor pries for information as do so many other bug chuckers. He knows the game, and I respect him for that. What struck me most about Robin, however, was not his river-savvy, but that he's a genuine do-it-yourself-er. Consider his restoration of a 15' Boston Whaler. The boat was in ragged shape when he first brought it home, but hours of work and gallons of elbow grease had it looking like new.

I follow Robin's blog, and had read of the refinishing. Consequently, I wasn't the least bit surprised when, on the night we fished together, he introduced me to his canoe.

Like the Whaler, Robin's smaller boat is perfectly suited for the water on which it drifts. It has seen use along nearly every inch of the Battenkill, much of the Delaware system along the southern tier of New York State, and any number of other rivers and lakes. What's most remarkable about this poor man's drift boat, however, is not the water it has seen. What is most striking is the way Robin has fish-pimped his ride. 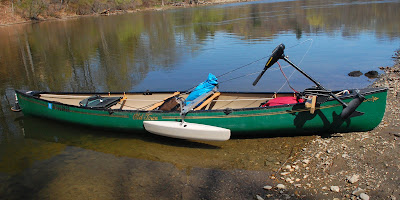 I think the photograph above demonstrates some of Robin's ingenuity. The trolling motor, seat backs, and pontoons aren't necessarily unique, but the oars are very well placed. Robin attaches the oars to the outermost pontoon posts, and he is able control the canoe without losing much range of motion. The anchor rope passes through a small hole that has been cut in the gunwale. With the pontoons out, the anchor can be dropped in relatively slow current, and Robin and his passenger can set up on fish as necessity demands. When set on a fish, the pontoons allow the angler to stand and better work his cast. Altogether, it really is quite a setup.

And it's the inspiration for my own PMDB (Poor Man's Drift Boat). I've recently sold some hackle for a thoroughly ridiculous price to seemingly nice people who intend to braid the stuff into women's hair. While I don't even pretend to understand this latest fashion trend (I'm forever a jeans, flannel, crew cut kind of guy), the money will be put to good use. It should be enough to fund a chassis (the canoe), and if I'm lucky perhaps an accessory or two for my new ride. Before summer's end, I'll be floating the river for trout, carp, bass, pike, and God knows what else.

What follows are images of the boats I'm considering. Please keep in mind that I'm a bug chucker first and a paddler second, and don't necessarily know what constitutes a good canoe given my particular needs.﻿﻿

﻿Foremost, I require stability and balance. This means that width is a factor, as is hull design. Even though I plan to outfit with outriggers any canoe I purchase, there will be times when I have my family along for a ride. Between the hyperactive triplets and a wife who goes into convulsions whenever her babies approach too closely to a mudpuddle, I need to make sure that the boat won't be the least bit tippy. Given the reviews I've read, the Old Town has the advantage here.

Second, the price of the canoe is a factor. Chicken feathers are worth more than their weight in gold these days, but I cannot spend a fortune. There are - after all - other toys to buy, and some of them are actually for my children.  I didn't necessarily need the money I made on my recent hackle sales, but now that I have it I would like to make it go a long way. My new boat will need to be affordable. Both boats are relatively inexpensive, but the Mad River has a slight edge.

Third, I need to make sure that each boat has a relatively high capacity. Five or six hundred pounds is likely to be the minimum load my boat will carry. Any canoe I purchase must shoulder this burden, and still handle with relative speed and efficiency. Here, the Old Town and Mad River appear in a dead heat.

Finally, I need to consider durability. Once I invest in a boat, I need it to last as I won't be buying another for a long while.  Again, the two boats I've selected seem tied.

So there it is. Robin has been kind enough to offer his advice, and I would appreciate any input my readers might offer. I'll be documenting my progress in assembling the PMDB; it should be an interesting process. Fingers crossed that I don't sink.
Posted by BKill at 9:30 AM 4 comments:

It's no secret that two weeks ago I made the decision to give into the latest fashion craze, and sell some of my saddle hackle to hairstylists who are then weaving (sure this is not the correct term) the individual feathers into customers' hair. I don't understand this trend, and I do not pretend to understand. I do, however, understand the exorbitant prices for which saddle hackle is being bought and sold. What follows are pictures of some of the hackle I have for sale. I would like to sell everything together as a lot, but I may be convinced to do otherwise.

Please understand that this hackle was acquired over a number of years, during which I worked in a fly shop. Some may be missing a card or bag, but it is all either Hoffman (Whiting before Dr. Whiting purchased the company), Whiting proper, or Keough. As such, it is all of the highest quality. Please also understand that as a shop employee, I had the opportunity to inspect these feathers before they ever made it to the shelf. I only purchased the best available.

Interested parties should submit offers to my email, mdaley73@yahoo.com.


ALL HACKLE HAS BEEN SOLD PENDING FUNDS