On Droughts and Overdue Resolutions

This may be a rambling and overly personal diatribe. You've been warned. Should you proceed and find you don't much like what you're reading - well, I am sure you know what you can do.

Until three or four weeks ago, nearly one year had passed since I last wrote anything of substance for The Rusty Spinner. One year, and truth be told, I missed it. The Rusty Spinner is a chance for me to talk fishing with friends at those times I find myself removed from both friends and fish. Although, I suppose it could be said that even when I am separated from both the river and this blog - sometimes by distance, sometimes by responsibility - I am never very far away. My flies, ragged from too many drifts over too many miles in too many years, always tumble through the currents of my imagination. Always.

As I sit here at this keyboard, however, I find I cannot remember where I was for those twelve months, and it occurs to me that if I don't know where I've been, then there is a good chance I was lost. Is it possible to lose your way without ever realizing you've fallen off the edge of the map? How does a bug chucker safely wade the current when he's unsure of where he's been or where he may be going? I suppose we have a choice: upstream or downstream, with the flow or against it. We're fishermen, brothers of the long rod, so either way we're likely to find a place that reminds us of home. All we need do is pick a direction and go. 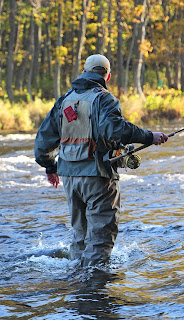 Last season, I spent fewer days wading the river's currents than I did in only the spring of any of the previous twenty years. My waders were dry. My lines were dry, and so too was my imagination. Vanished was whatever enthusiasm I may once have had for throwing a light line over heavy fish - turned to vapors and evaporated in whatever personal drought I was experiencing. Could there be any pain more painful, any hell more hellish, than that of the dedicated bug chucker suffering through the desert? Good Lord, I hope not.

What then brings me back to The Rusty Spinner? I guess I've stepped back in the water, picked a direction, and experienced a renewal of sorts - both of interest and of spirit. Lately, I find myself daydreaming: brown trout and steelhead, bass and bluegill, pike, musky, and carp. I'm a little surprised to discover they're all still there, right where I left them, in the brightest and most colorful parts of my memory. I find I haven't been this fired up about fishing since I was in my twenties, and now I'm making plans - new year's resolutions of sorts. Long overdue resolutions. 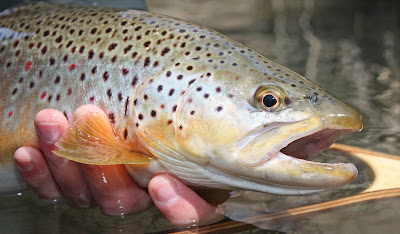 First and foremost, I plan to reacquaint myself with my favorite trout stream. She was hard hit by Hurricane Irene in the summer of 2011, and in the seasons that followed, the fishing fell off considerably. I've come to understand that the storm changed her. How might she have remained untouched when in the span of just a few hours the river's flow increased from a seasonal norm of a few hundred cubic feet per second to over 40,000 cfs? Homes and businesses were lost, lives were changed, and for the most part, the river's trout do not hold in many of the the same riffles and runs they once did. I am going to find them; I know they're still there.

This is also likely to be the year I return to Montana. She and I have been apart for far too long. I miss her, and fate - for once working in my favor - seems to be conspiring to make a reunion happen. An old friend recently left his job with the Orvis company in Vermont, and he has taken on a new position with Montana Fly Company in Columbia Falls, Montana. His move, combined with ridiculously low gas prices, makes the trip almost certain. I'll return to Montana a little older and wiser than when I left her, and I might have a few more tricks up my sleeve than I did when last I fished there. I can't imagine I'll be the first to use a spey rod and swung flies in the riffles and pools of the Yellowstone or Madison, but I'm fairly certain the club's membership is small.
Of course, looking forward to the new season is near impossible to do without being reminded of seasons past, and for whatever reason I find myself looking back decades. When I was a boy, it simply wasn't possible for my friends and I to fish trout whenever we liked. The nearest trout stream was too far away from home for a reasonable bike ride, and our collective need to fish could hardly be sated by a few weekend trips  to the Battenkill with our fathers. As such, we spent the better part of our formative years fishing the Hudson River, which flowed through our diminutive hometown and offered opportunities to catch any number of warm water species. We caught thousands of smallmouth bass and the occasional largemouth. We caught buckets of bluegill and crappie. We caught carp, walleye, and every once in a while, one of us would tag a pike. Regardless of their size, the pike were always the trophies about which we bragged. They were just rare enough to be interesting but common enough to be a goal within the realm of possibility. They were strong. They were fast, and they were angry. They were waterborne dragons, and we were the knights with whom they did battle.

Thirty years down river and I find myself once more dreaming of these predators. I've already started skimming through the pages of a faded DeLorme Gazetteer and poring over Google Earth; I've marked some likely looking water, and I'm making plans. I'll revisit my old Hudson River haunts. I'll explore two lakes and three or more rivers. This season - with the help of friends and fellow fish bums - I'll rediscover those dragons I chased as a boy. With a little skill and load of luck, I'll stick pins in pike and mess with my first musky. Should the river gods be so gracious, I'll even find time for a few bowfin and gar. I'm giddy at the thought. 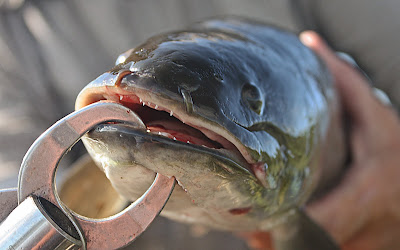 My final resolution has nothing to do with fish, but rather with my fellow fishermen. For years, I have been far too secretive and reclusive a bug chucker. I've been such a piscatorial hermit, in fact, that I have failed to cultivate friendships for fear of having to share "my" water with new friends. This is the year that changes. I am officially too old and too tired to isolate myself in some small corner of some small river. This year, people come first. I will offer the keys to the kingdom, an invitation to the inner sanctum, to several people who have until now been on the periphery of my fly flinging world. With luck, they'll realize the invitation is genuine. With luck, they'll share with me a piece of the river I love. With luck, they'll respect that resource as I do, and with luck, their taste in craft beer is only exceeded by the generosity of their natures.
Posted by BKill at 8:32 AM 4 comments:

There isn't much I could say that this doesn't say better ...