An hour passed, and still I couldn't rid myself of the shakes. My hands trembled, and my fingers found impossible the act of threading tippet through the eye of another hook. My breathing was - for lack of a better, more appropriate, and less cliched adjective - ragged. Yes. My breathing was ragged. 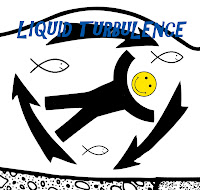 It happened too quickly, and when it was over I was reminded of what those grizzled, old vets at the VFW would say - almost universally - when asked of their war experiences: "long moments of boredom, interrupted by glimpses of pure, unadulterated terror." Was I terrified? Perhaps. The shaking of my hands would suggest as much, but I was experiencing something else too, something much more than fear.

I was awestruck. I was exhilarated, and I knew from that moment forward I would never be quite the same. My thoughts would reinvent and realign themselves with this new passion I had only moments before discovered. Beyond all probability and in spite of doing everything the wrong way, I had hooked my first steelhead. 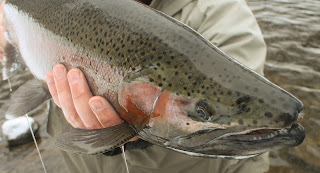 That first hook-up came some twelve or fifteen years ago. Regardless of the distance of time and memory I can still relive with perfect clarity, every second of my attachment - through rod and fly - to that first fish. I can see my pale yellow line drifting slowly from right to left, carried on currents I had yet to fully explore or understand. I feel pursed lips turn to a grin as my fly - an unthinkably small thing given the stories I had heard of the river's fish - finally found its way into the slot. The pause - what must be a take - almost imperceptible, but there nonetheless. A strip-set and a lift of the rod, which is met in kind by head shaking and an explosion of violence unlike anything I had ever before experienced. 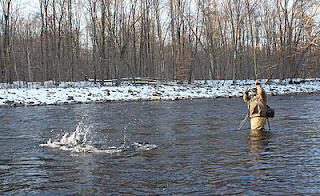 And now, fifteen years after the fact I am reminded of the way the light shone on that steelhead's broad back as she somersaulted some three or four feet above the water. I can see the breadth of the animal's tail, perhaps as wide as both my hands when placed side by side, fingers splayed (at 6' 3" tall and near three hundred pounds I am a big man with big hands). My stomach clenches in an all-too-familiar way as I revisit the moment when she turned downstream into the rapids, forever severing our connection with a burst of speed that was as remarkable for its suddeness as it was its ferocity. 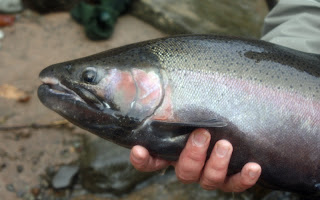 The first steelhead I ever hooked was likely the largest I've ever hooked. At the time, my friend and guide suggested the fish was at least 18 pounds. I suppose it might be that time has a way of distorting memory, but in hindsight I'm left to think the fish was closer to twenty. Of course, I'll never know.

I'll never know how big she truly was. I'll never know just what she would have felt like had I held her in my trembling hands. I'll never know how my life might be different had I caught that first fish rather than merely watched with mouth agape as she ran for the lake. Perhaps the only thing I've learned in the years between that first fish and the last, is that losing is sometimes the best thing that happens to us. Losing keeps us hungry. Losing keeps us looking forward, gives us hope, and teaches us a genuine appreciation for winning. 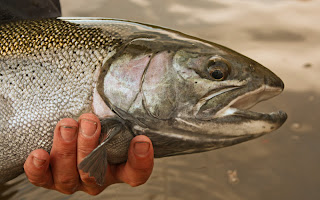 As summer turns to autumn and leaves begin to fall from the trees, I find my nights are not spent dreaming of the fish I've brought to hand. Instead, I go forward into this steelhead season filled with imaginings of what might have been and what could be. I go forward into the season armed only with a few boxes of poorly tied flies and a question.

Coho of a Lifetime

Holy Moses ... I thought this was a big king when I first saw the picture. I was wrong. It is an enormous Coho. I do wonder, however, if testing will prove it a hybrid. I seem to remember one several years ago that might have been a contender for the New York State record until it was tested. The test revealed it was a king/coho cross. Regardless of this beast's lineage ... it is a magnificent fish.

Follow the link for a short story and a better pic ... Simms Fishing Products - Coho of a Lifetime.
Posted by BKill at 6:59 PM 1 comment:

Every September finds me cruising YouTube for something, anything that might help to sate my need for steelhead. The fish generally begin to arrive in October, but by the first week of September I can feel them coming. They're almost here; no doubt, a few have arrived already. Unfortunately, September is a hectic time for school teachers such as myself. Work will keep me away for a while longer, but in the meantime I like to check in on the river via video, and see how other bug chuckers are doing.

Sadly, it would seem that 2012 is destined forever to be remembered as the year of the snagger. The water in the Salmon River is as low as it can be and still be fishable, and the conditions make easy targets of the king and coho salmon pushing upstream.

Consider the following video ... and please - if you've time - comment via YouTube (as I have ... four times) to help me shame these chuckleheads into doing the right thing.

Email ThisBlogThis!Share to TwitterShare to FacebookShare to Pinterest
Labels: A Hook in the Ass Gets Em Every Time, Flossing, Pulaski Palsy, Salmon River, Snagging, Snagtastic

Looking to purchase some new toys so I am listing a couple of items on Ebay. Anyone looking for an excellent Great Lakes steelhead rig may want to take a look. And one reel ... an Orvis Battenkill Mid Arbor IV loaded with an Orvis Salmon/Steelhead 7# Wonderline ... Click here for the auction. 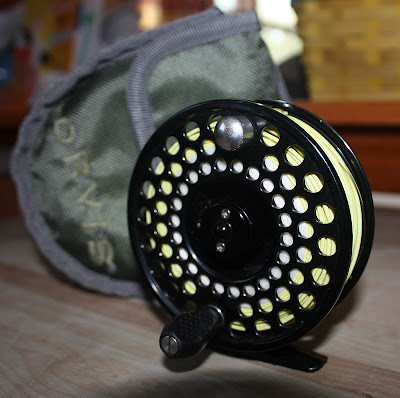 Email ThisBlogThis!Share to TwitterShare to FacebookShare to Pinterest
Labels: Battenkill, Buy Me Please, Crazy Eddie, Ebay, Everything is on Sale, Helios, The Fisherman's Flea Market

In recent years, the group of bug chuckers that brings you The Rusty Spinner has tried to make at least one trip to the Salmon River in New York, specifically to fish for early season king salmon. In our collective opinion, the river is far too crowded with anglers to target Chinook during the height of the salmon migration, so as far as we're concerned it's late August through early September or not at all. When October rolls around and steelhead begin to run the river in ever increasing numbers, then any thought of kings quickly disappears. In the interim, lake run Chinook are an interesting distraction, but a distraction is all they'll ever be. Chinook may be kings, but steelhead they ain't. 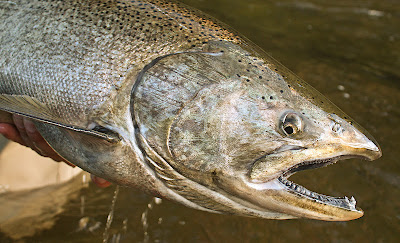 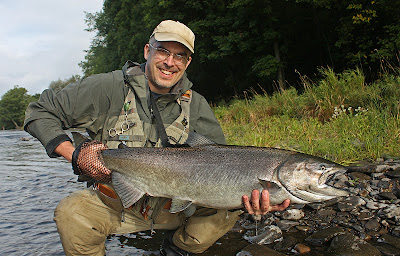 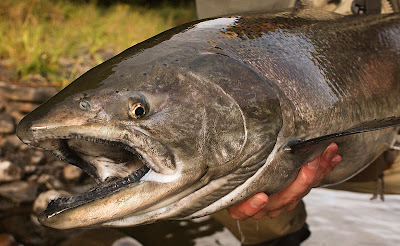 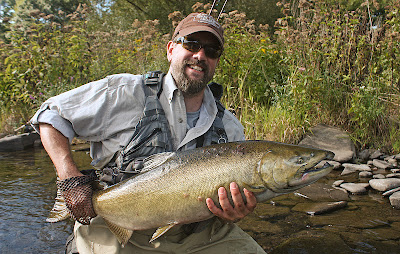 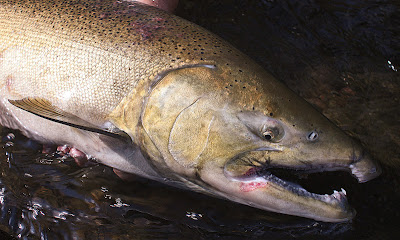 I've been dreaming about steelhead, but my chrome imaginings won't see fruition for another month or two at least. To try to dull the pain of waiting, my waking hours are spent thinking about carp. Yes. Carp. I'm convinced that they're the closest thing to steelhead that summertime bug chuckers might find in fresh water. 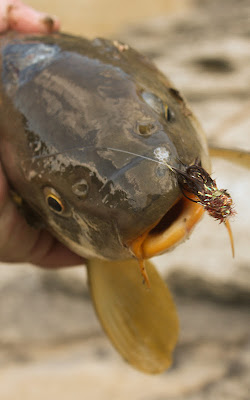 Over the past few years, common carp have received quite a bit of attention from the fly flinging public, and much of this is deserved. Carp are abundant, accessible, and able to test a reel's drag in a way that's uncommon in most warm water fisheries (those in North America at any rate). But still, I find myself asking, "Why?". Why so much time, money, and effort spent chasing a fish that was - until just a few years ago - generally considered a trash fish? 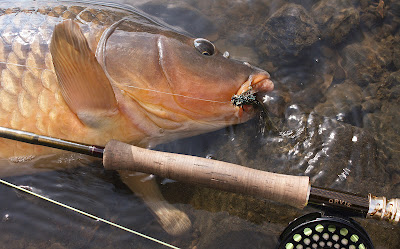 I think part of the madness - and it is as much a madness as is chasing any other gamefish - is market driven. Across most of the country - in fact, most of the globe - trout fishing is a very limited endeavor. Trout simply do not exist everywhere a bug chucker might wish. The same could be said of bass, pike, stripers, muskellunge, salmon, bonefish, tarpon, etc. The list of fish available to fly flingers goes on ad infinitum, but none - excepting perhaps panfish - are as accessible and available as are carp. Similarly, few fish are as challenging a quarry as are carp. 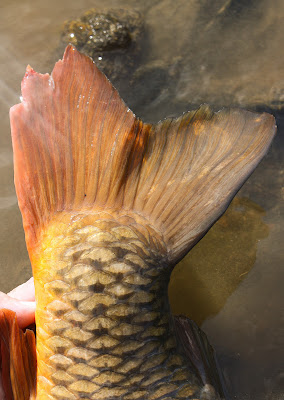 As a consequence, the fly fishing industry - an industry that caters to a small niche market and is always on the prowl for new customers - benefits immensely from the carp's popularity. New rods, new reels, new lines, and new flies are everyday being marketed to a new group of customers. It is no coincidence that most major fly fishing publications - periodicals that derive a substantial portion of their income from advertising revenue - have recently printed articles detailing the ins and outs of chasing carp. Brownlining has indeed gone mainstream. 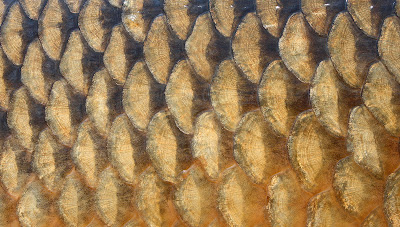 And given the common carp's recent ascendency and celebrity, I thought it might be time we were given some insight from the perspective of those folks who best know this fine gamefish (yes ... I said gamefish). I thought it might be time we went "Behind the Music" or "Under the Water" as the case might be with our friend the common carp. If Stevie Nicks deserves her own special, then so too does Ol' Noodle Lips.


So what I've done here is to transcribe the first few moments of an episode of "Behind the Music" that will otherwise never see the light of day - even though it is certainly deserving of the honor. 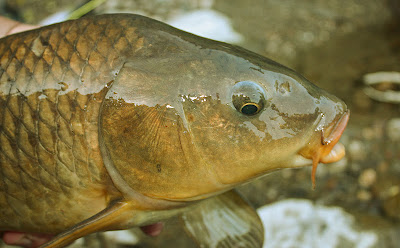 Narrator: He's been called a ghost.

Dave Whitlock: Like hillbillies noodling for dinner, he has an aura that's more than just slime and bottom feeding.

Narrator: He's a country boy who cast a spell on the world of bug chucking at a time when bug chuckers were looking to be enchanted.

Tom Rosenbauer: Carp. He's entirely about attitude. You can't make him eat. You can't make do much of anything. He'll do whatever the hell he wants to do, and there's nothing you can do about it ... not unlike a Salmon River snagger.

Narrator: For centuries, the common carp was misunderstood and much maligned. He was worm food. He was garden fodder. He was fertilizer.

John Gierach: A.K. once gave me a carp fly tied with quills that were specially dyed in a combination of pureed and blended mango nut butter, lilac milk, and wasabe. 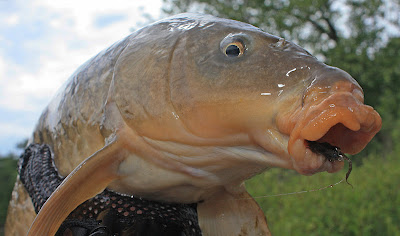 April Vokey: I wasn't married to carp, but I would have been had he asked. We had some good times ... oh yeah, good times.

Narrator: He first rose to prominence on the U.K.'s coarse fishing scene.

Narrator: Then he stole the spotlight as a 226 year old koi, which was sold at auction for 13 million Yen, and died shortly thereafter.

Lee Wulff's Ghost: What is wrong with you people? I chased ocean-run Atlantic salmon with nothing more than my rugged good looks and the sheer force of my will. Think Kurt Gowdy would ever narrate a film about carp? Well ... do ya'?

Narrator: Like a phoenix rising from the ashes of its own funeral pyre (or a drunken frat boy slowly asphyxiating on his own vomit), carp is enjoying something of Renaissance - a rediscovery and rekindled appreciation for all things stank.

Henry Winkler: In the months before filming, "Hollywood: Part 3", I lobbied to have the script changed so that my character jumped the carp, but ultimately the network insisted on a shark. Networks don't fly fish.

Dick Cheney: I haven't the heart for carp fishing.


Carp: Why didn't someone tell me I smelled like this?


Narrator: Tonight, Carp, the story behind the scales ... 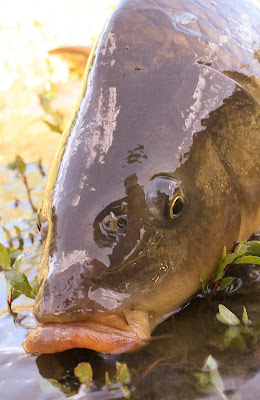