I can't be absolutely sure, but it seems as if someone has been holding an enormous magnifying glass over the entire northeastern United States, and watching bug chuckers squirm like so many toasted ants. Trout streams are disappearing at an alarming rate, and bubbling hot tubs are taking their place. We've had some rain, but not enough to make a difference. It's simply much too hot to catch and release cold water fish; every area trout is undoubtedly stressed near death. I wholly expect a fish kill this year; we've had kills in cooler years. Not good ... not good.
There is, however, something of a bright side for a New York fly flinger going through bug chucking withdrawl. The bass fishing has been absolutely superb. I had forgotten just how much fun chasing smallmouth and largemouth can be. When a sixteen incher goes broadside in the current, and nearly doubles over a 10' 7# steelhead rod ... well ... you know why they're called game fish. Good times ... good times. 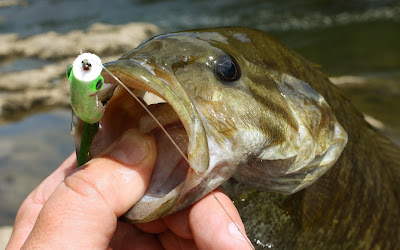 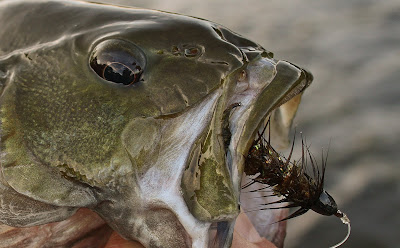 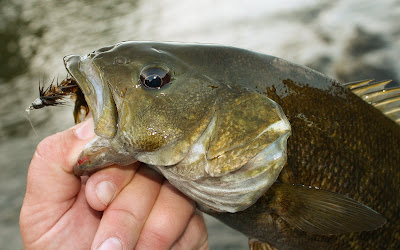 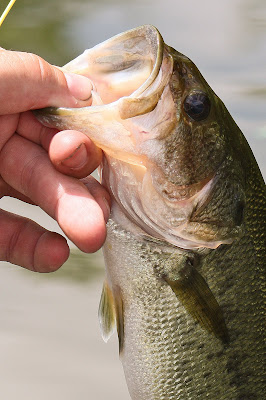 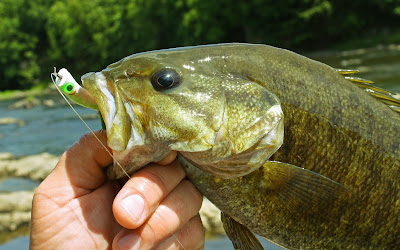 Beer can be as much a part of the bug chucker's day as is retying tippet, wading just a little too deeply, or setting the hook. As such, one's choice of stream side or lake shore beverage should not be made thoughtlessly or without care. Sure, there are those days when a Genny cream ale will suffice (I personally haven't had one of those days in years ... not even sure there's still a Genessee Brewing Company), but generally there are those brews, which are better suited to some fishing trips than to others. 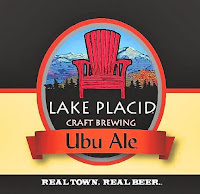 For example, the Lake Placid Brewing Company's popular Ubu Ale is as well suited to the opening day of trout season in New York as it is to the October run of spawning browns from Hebgen Lake into Montana's Madison River. If there's a chill in the air then there should be an Ubu in your cooler. As a sidebar ... Ubu was an enormous chocolate lab that made frequent appearances around the Olympic village of Lake Placid, New York. Apparently, the dog had a nose for malt, a palette for beer, and a taste for watching American college students kick the snot out of professional Soviet hockey players. 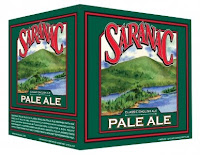 Saranac Pale Ale - as my token, hippy friend Ben says - is probably the best $8.00 six-pack one can buy. It's a go to beer.  You stick a couple in the cargo pocket of your vest or tuck them into your waders, and only break them out when the fish have either thoroughly acquiesced to your skill - or kicked your ass up and down the river. Saranac can make a bad day good, and a good day better.

Saratoga Ale is brewed by the Olde Saratoga Brewing Company in Saratoga Springs, New York.  This is a hoppy, bitter ale that won't leave one feeling overly full or bloated, which is nice if you're a fat bastard like me. Saratoga is best enjoyed after a long day on the water, when the ice in your cooler is just starting to melt, and the label is beginning to peel away from the bottle. Take my word for it when I tell you that few things in life are as satisfying as one, two, or six Saratogas.

Unibroue's La Fin du Monde (the end of the world) is incredibly smooth. In fact, it may be the smoothest beer I've ever had. What's interesting - very interesting, in fact - is that at 9% alcohol by volume, it packs a punch without losing any flavor. If this isn't the best beer of the bunch, then it is certainly a close runner-up. Did I mention it is nearly as smooth as Salma Hayek's deliciously bronzed thighs? ... I know - she's a mom now - but I'll always think of her as Santanico Pandemonium (find a Google image ... it's worth your time).

Generally, I'm not much a fan of fruit flavored beer. After all, beer should taste like beer, and not some sort of carbonated and bastardized mango-guava-blueberry iced tea. Copper Dogfish Head's Aprihop may be the exception. When I need to cool down after a day of sweating my ass off in breathable waders, this is the beer for which I'll reach. The apricot flavor isn't too sweet or overwhelming, and nicely compliments the hoppiness of the ale. I find that drinking this particular concoction also helps to free one's mind of thoughts of abandoning one's three children, and running away to live as a hermit in Guatemala. 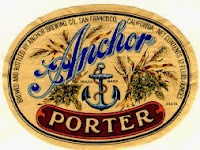 If real men fly fish, then those fly fishermen with the most hair on their chests fish for winter steelhead. I have to admit that I'm relatively new to the game, and that I find few brews will help to take the edge off a bitterly cold and fishless day quite as well as the Anchor Brewing Company's, Anchor Porter. This stuff is thick - not Guiness thick mind you - but certainly dense enough to trick one's stomach into believing you've just swallowed a fork full of pancakes ... with a generous application of butter and syrup. It's just the kind of thing you need if you've fallen into the Salmon River ... in February ... just as a drift boat full of admiring sports floats past. Trust me.
So, what's my favorite ... my number one? I haven't the words so the picture will have to suffice ... if you can find it, try it. This is the one that will haunt your dreams. 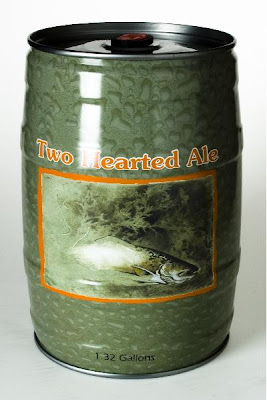 It's a Small World

Earlier in the week, I posted an invitation for my readers to submit their own writing, updates, and photographs to be considered for publication on The Rusty Spinner. The first gentleman to do so is Ruhan Neethling of Papua New Guinea. He sent the pictures you'll see below. For those of you who might not know, the fish is a golden dorado, which is a species renowned for its appetite and attitude. Ruhan writes that he caught these fish in Bolivia, and that they'll smack anything "big and ugly."

So raise your glasses; a toast to my man, Ruhan. He's proof that fly fishing pervades language, nationality and heritage, and that the internet has made the world a much smaller place. 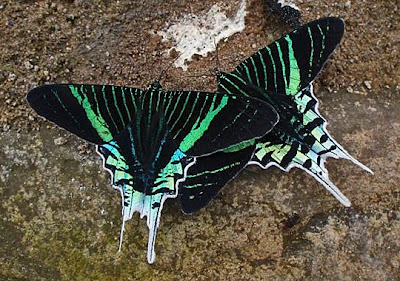 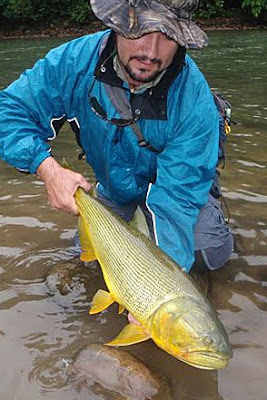 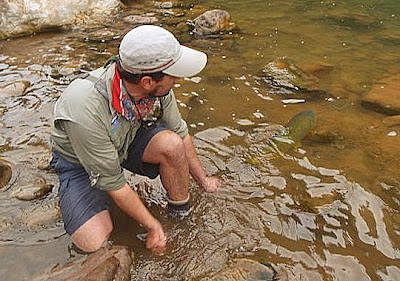 Words don't always come easily for me, and time has a way of preventing me from writing as often as I would like. Sometimes, it's hard for me to keep this blog fresh, timely, and up-to-date. As such, I am offering an invitation to anyone who happens to stop by here from time to time (this means you Adam ... Ben ... Shawn ... et al).

Please submit your writing to be posted on this blog. Your posts need not be particularly philosophical or verbose. Perhaps you would only like to submit a photo or a video. Perhaps you've some news that might be of interest to fly flingers in your area. Perhaps you only send a link to a news article. Whatever the case may be, send it my way. If I think it's appropriate, I'll post it here, and give you full credit for the update.

My only caveats are these:
So ... please consider sending something along. I do the best I can with The Rusty Spinner, but I know it can be better with your input.

I can be contacted via mdaley73@yahoo.com. Please include "Rusty Spinner" in the subject line.

The Secret to Running

"The secret to running is running," or so says one of the coaches with whom I work. Honestly, I don't know the first thing about running - I don't run if police dogs are chasing me, and you would guess as much when first you saw me - but I understand the metaphor. To improve at anything one must practice; to run better, one had better run.

Like athletes, fishermen generally improve with time afield. As with any of life's more valuable endeavors - grilling pork tenderloin and drinking vodka come to mind - experience is the key. With each successive season on the water, the angler casts more handily and precisely, ties knots more quickly and securely, wades more stealthily and carefully, and swears and curses more vociferously. As such, this is a sport where age often has the edge, but there are anomalies.

Consider those fellas who've been fishing for thirty or forty years who can't read water, tie knots, or cast worth a damn. These are the sports who keep many guides in business, make the rest of us feel pretty good about ourselves, and - as painful as it may be to admit - we want these folks on the water. We need these folks on the water. As the fish are generally much brighter than the fishermen who chase them, our egos would be devastated without those incompetent anglers alongside whom we might juxtapose ourselves. If you're a little overweight and want to look good in a picture, then surround yourself with the morbidly obese. You know what I mean.

Conversely, there are those select few on the other end of the spectrum; the naturals who pick up the long rod for the first time, and seem immediately connected. They're dialed in. They're casting 40 feet on day one, double-hauling ninety feet on day three, and tying married-wing Jock Scotts at the end of their first month. Sadly, I am not one of these people. I hate them - all of them - because I've had to learn over 30 years what they were gifted at birth. Jealousy rears its ugly head.

I suppose that I'm relatively competent; my knots generally hold, I've a good eye for water, and rate as a decent fly tyer. I will not, however, be winning any casting competitions. Ultimately, I'm a product of my environment. The ditches in which I wet a line are relatively small. Only very rarely do I need to throw more than 40 feet, and that's usually the extreme. In my neck-of-the-woods, it's far more important that I place a fly precisely than cast a country-mile. So, I'll let the Rajeff brothers hold onto their trophies just a little bit longer.

I guess my point is this. Lots of folks run, but only a select few run in the Olympics. Those that aren't competitive, run simply for the joy of running (occasionally for survival), or so I'm told. Again, I wouldn't run if Darth Vader's star destroyer were chasing me across the galaxy. Maybe those of us who are merely mortal, fish simply for the joy of fishing. Maybe it isn't about competition, the payoff, or the money shot. Maybe fishing is just about the exercise.
Posted by BKill at 11:35 AM No comments:

The Pledge of Allegiance

Given the holiday I thought this was especially apropos. I do love this country ....